I had the honor of interviewing Mike Lesser back in 2010, for a profile in Dazed and Confused magazine. He was one of the most pleasurable, and also the easiest interviews I have ever done, for three reasons 1) (which is obvious) because he has so many interesting stories and ideas, 2) because he provided a bottle of gin (which we got through nearly entirely in the 3 hours that we talked), and 3) because you can’t shut him up. He’s an interviewer’s dream, really — I walked in, asked “how are you?” and he told me his life story. I feel so honored to have met Mr. Lesser during his great life, and it’s such a testament to his work and his words that they just as powerful now as they were decades ago.

I recently interviewed one of the coolest dudes ever—the political activist, journalist, and mathematical philosopher, Mike Lesser. Lesser was a key contributor to the highly influential anarchist newspaper, The International Times, founded in the 60’s. He also worked on super computers at NASA for a while, and just generally did lots of cool shit like run around naked and cause trouble. I interviewed him for Dazed and Confused a couple months ago, and in the two hours that we talked we finished nearly an entire bottle of gin. Intense. I could hardly keep up. Here’s a bit of oral history for you, told by Lesser himself. Footnotes below. 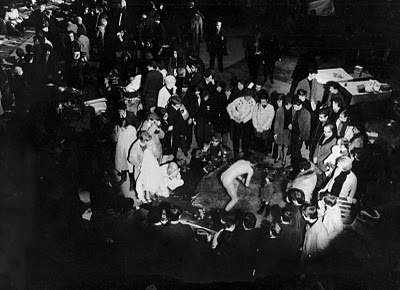 “I’ve worked on the intelligence side of the anarchist movement for most of my life, even really until now. I’m an anarchist by style and conviction, because anarchy, in my opinion, absorbs all of the best and none of the worst of a person. I’ve always fought in the streets—I don’t believe this country should be run by fat clever slugs who are good at sitting in chairs.

I was kicked out of Charterhouse School at fifteen. I don’t believe in evil and I don’t believe in good, but conveniently I would say that school was demonic. On one occasion I was asked to remove my jacket, so that I could be beaten for remarking that the school’s maps which were covered in red were inaccurate. I replied, ‘I’ll take my jacket off if you take yours off.’ I was asked to leave at the end of the term.

Soon after I left I heard that many intellectuals—guys like Bertrand Russell [1] and many of the Angry Young Men playwrights [2]—had formed the Committee of 100 [3]. I attended the demonstration they held at The Ministry of Defence [4]. This is how I came to join the Committee. I was swept away by this extraordinary wind. The Jefferson Airplane said: “It’s a cool wind that blows against the empire.” This was the wind that blew against the empire.

I rose very quickly through the ranks of the Committee of 100. I was young but I was intelligent and had an extraordinary will to overthrow tyranny, and at sixteen I became something of a child general.

Once, before a demonstration, we were summoned to court and asked to sign a paper binding ourselves to keep the peace and stop demonstrating. We told them to go fuck themselves. And so they sent the sixty of us off to jail for a month. It was a piece of piss. I laid in bed eighteen hours a day reading the whole history of the world’s science fiction. I came out ringing like a bell. I’d been in a Buddhist monastery. Luxury.

When I got out I joined the intelligence section of the committee, and I worked there until a huge political coup [5]. After that I went abroad for six months to make myself scarce. When I came back instead of Buddy Holly it was Bob Dylan. That was one hell of a shock. 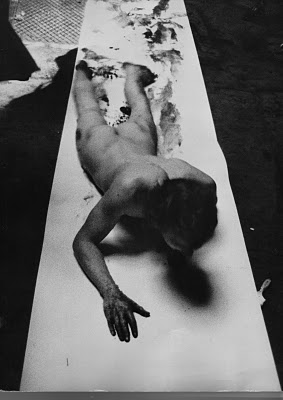 Then came IT [6]. IT was started by Hoppy [7]. I joined because I needed to say what I’d been saying since I was thirteen—liberty, equality, fraternity! IT was aggressive. We wanted to engage, and we looked into the flames of our souls and created this mad combination of a style sheet and libertarian anarchy. And we were heavily harassed because of our spirit [8].

That same year Hoppy founded UFO [9], where we held the IT launch. Pink Floyd played. Floyd were our band. UFO held 2,000 people, but at that gig there were 10,000 people outside. Inside there was a big pyramid of sugar cubes. Some people said only some had acid in. Some said none had acid in. Listen, they ALL had acid in!

Later I worked on super computers at NASA in Washington. NASA needed to create more heat efficient machines, and they wanted cunts like me on their side. Some of the data produced while I was there was visualized and set to a piece by Tchaikovsky, which is one of the best pieces of mathematical visualization to date.

At the moment I’m forming the IT archive, which is probably going to be the most of durable thing that exists in IT’s forty years. This is our stake in the future. For the future is not a dystopia. The future is a fuck up, just like everything else.”

2. A group of working and middle class British playwrights and novelists
who became prominent in the 1950s.

3. A radical British anti-war group set up in 1960 by Bertrand Russell. Its supporters used and advocated nonviolent civil disobedience to achieve their aims.

4. The committee’s first act of civil disobedience was on 18 February 1961, and was a sit-down demonstration against nuclear testing at the Ministry of Defence, London, attended by 5,000 people.

5. Possibly referring to The Spies for Peace, a group of anti-war activists associated with the Committee of 100, who publicized government plans for the aftermath of a nuclear war, after breaking into a secret government bunker in Reading in 1963. The original spies were never identified or caught.

6. IT (or International Times) was an underground anarchist newspaper founded in London in 1966, running on and off until 1989. Contributors included Alexander Trocchi, William Burroughs, and Allen Ginsberg.

7. John “Hoppy” Hopkins is a British photographer, journalist and political activist, who photographed many prominent figures in the1960’s UK underground, including The Beatles, the Rolling Stones, Louis Armstrong, and Malcolm X.

8. The IT offices were under constant police harassment, allegedly to force the paper out of business.

9. The UFO Club was a famous but short-lived underground club held at The Roundhouse in London during the 1960s. Pink Floyd was the resident band.

Tweet
This entry was posted on 20 August, 2015 in homepage and tagged Dazed and Confused, Interview, Karley Sciortino, Mike Lesser. Bookmark the permalink.