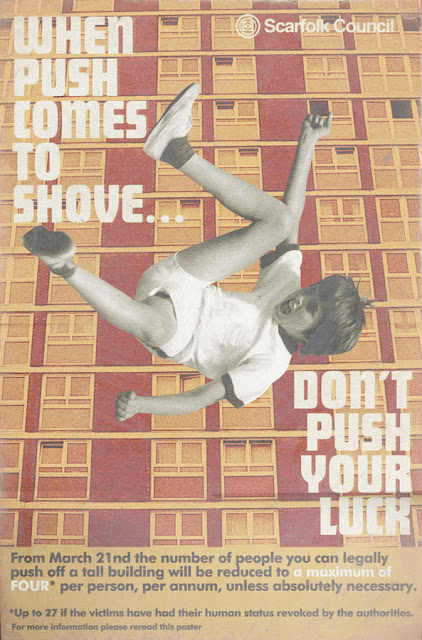 Though pushing people off buildings was all the rage in 1970s Scarfolk, it was quite damaging to concrete paving. Hundreds of paving slabs had to be replaced in 1974 alone, at an estimated cost of £35.

With some of the most at-risk slabs dating as far back as the early 1970s, a local charity called SPLAT (Society for Pavement Liberation from Amateur Terminations) dedicated itself to the protection of paving slabs and their heritage in general.

Though the charity raised awareness, it had little impact on the number of people impacting the valuable concrete from great heights.

The charity lobbied the council which eventually agreed to regulate the amount of people that could be hurled from tall buildings (see poster above).

Paving slab damage was reduced by 25%, but the problem transferred to locomotives, specifically their paintwork, which was at risk of chipping after  pushing people in front of trains became the new, preferred method of amateur execution.

Posted by Scarfolk Council at 15:47

Some of my creations use images found on the internet. I often have no idea of their source. If you feel that I have infringed your copyright please contact me, but please consider that satire and parody may be protected as ‘fair dealing’ under 2014 changes to copyright law. All images using non-original sources (that are not public domain or open access/creative commons license) are not-for-profit.
All original work copyright Richard Littler 2013 – 2017. Blog & book edited by Dr. Andrea Hacker. Simple theme.
Tweet
This entry was posted on 14 February, 2018 in homepage. Bookmark the permalink.