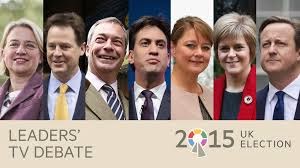 Despite a colourful set and matching computer graphics after watching the ‘Live Election 2015 TV debate’ the seven UK residents, who still actually believe their vote might bring about positive change, have described the selection of party leaders as ‘Shifty Shades of Grey.’ Political analysts have pointed out that due to populist ideological development over the last 25 years the public has seen an inevitable convergence in party manifestos to the point, where it would seem, it has become nearly impossible to tell them apart. And they were always shifty.

Party leaders were quick to dispel rumours of similarity with (Red) ED Milliband wobbling his funny mouth about, ‘These rumours of similarity are absurd. Apart from our views on the War on Terror, being pro banker, pro military industrial complex, pro capitalism, pro globalisation, pro paying off our funny money ‘deficit,’ to totally unknown privatised institutions, ridiculously pro Israel, pro Saudi Arabia, pro China and the USA, pro no inquiries of 9/11, 7/7, Doctor Kelly, the House of Commons pedophile ring, cash for questions etc, etc, etc, etc, ad infinitum, pro keeping MP’s right to vote their wages up and pro making sure 70% of the political establishment continues to be packed with our Ox-bridge friends and family who inherently uphold these same ridiculous contradictions and immoralities, the core beliefs of the Labour party and the Tories are diametrically opposed. And about the things that  really  matter.’

David (True Blue) Cameron scoffed, ‘Similar? What are the public thinking? For a start my name is Dave whilst Ed’s is Ed. We both have different addresses (I think) and Mr Milliband likes brown bread with his caviar while I like crackers… probably. How could we be any more different?’

Nick (Yellow Belly) Clegg threw his worthless opinions into the news bin, stuttering, ‘Grey? We are more like a rainbow of ever-contrasting colours and hues. And I am the most different and vibrant of them all. For a start none of the other candidate’s names rhymes with ‘Smeg.’ Unfortunately I seem to have forgotten the other differences.’

Nigel (Purple Prince of Darkness) Farage, keen to join in the prism-like debate, pointed out, ‘What about my coats? None of the others have coats like mine. Why do you think I wear them? Do you think I really want to dress like this? I have spent over £1400 in Debenhams this year alone on these striking coats. If you’re telling me that I have wasted all this time trying to look different and the public hasn’t even noticed I will scream.’

The Scottish and Welsh candidates (Brown and Orange ‘unrespectively’) drew attention to the fact that, although their core beliefs were identical to the others within a margin of 0.2%, they had utterly different post codes and, by staggering testimony to their ability to keep going in the face of enormous odds, did not come from the same public school system.

Finally, Natalie (At Her Wits’ End) Bennett, the Green candidate screamed ‘Sweet Jesus! Are you colour blind as well as being deaf you bunch of fucking cu… idiots? The green party have had a totally different manifesto for the last thirty years and still you haven’t noticed. If you truly want political change in this country then the only possible way you can achieve this is by voting for us. Then hold on to your hats for those first brilliant and uplifting first six months before the establishment assassinates us all in plane crash and we are all replaced with servile grey yes men. Ah yes… But what a six months. C’mon England!’

TV leaders’ debate heckler: I would not vote for anyone who took part
The Guardian‎  –  14 hours ago

View all posts by Ethan →
This entry was posted on 3 April, 2015 in homepage and tagged Ethan Harrison, satire, spoof news. Bookmark the permalink.