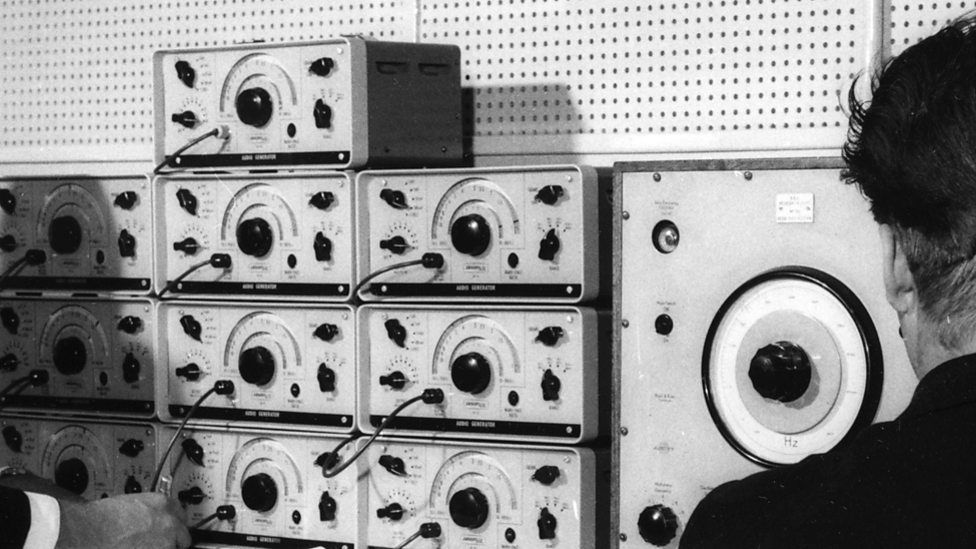 It’s fun to imagine the staff of the BBC Radiophonic Workshop, a sound effects unit, hidden from public view in a bunker under Broadcasting House, only coming up for air to hand over tapes of their work to unsuspecting drama producers.

In truth, they were happily ensconced at the BBC Maida Vale Studios and they often let photographers in to shoot them while they were going about their work, as these pictures prove. They’re taken from the BBC archive and cover almost the entire history of the Workshop, which was closed in 1998.

We present them to celebrate Prom 13: Pioneers of Sound, a late-night concert which takes place on Monday 23 July (start time: 10:15pm) and features works from two of the BBC Radiophonic Workshop’s most forward-thinking musicians – Delia Derbyshire and Daphne Oram. 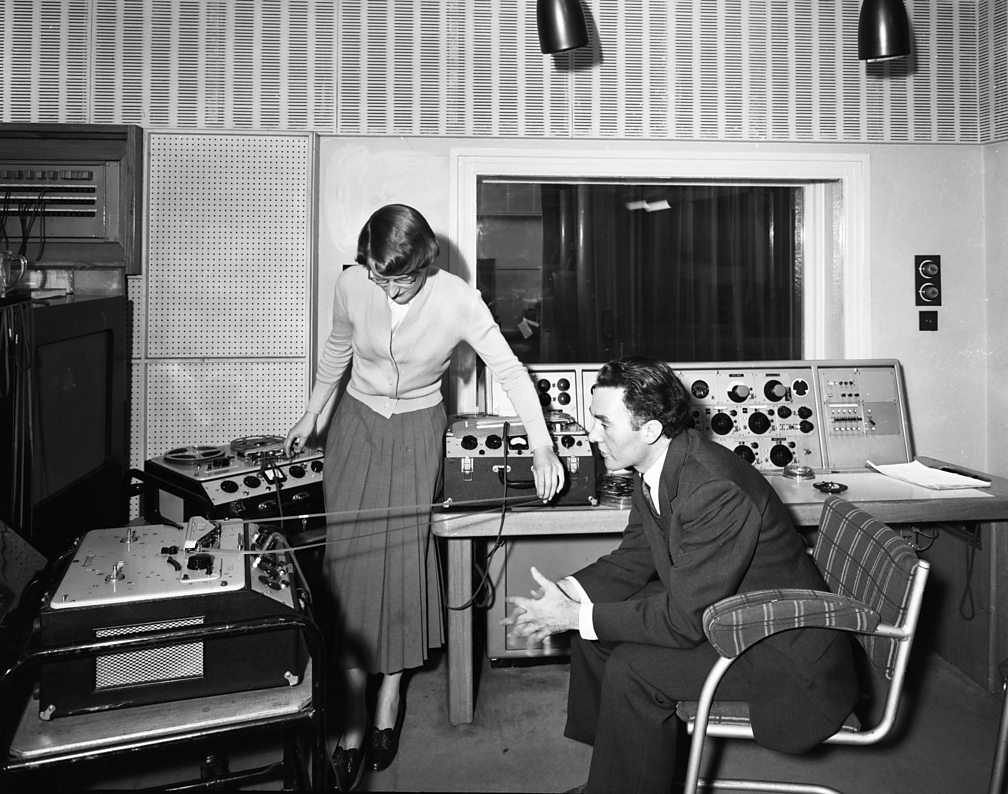 This photo was taken in 1957, a year before the formal creation of the BBC Radiophonic Workshop. It pictures Fredrick Bradnum, writer of the ground-breaking Private Dreams and Public Nightmares, an experimental ‘radiophonic poem’ about the creative use of effects. He’s working with Daphne Oram, who was first employed at the BBC as a sound engineer in 1943, aged 18. Daphne was one of the original Workshop studio managers, and she would go on to become something of a legend in electronic music circles. 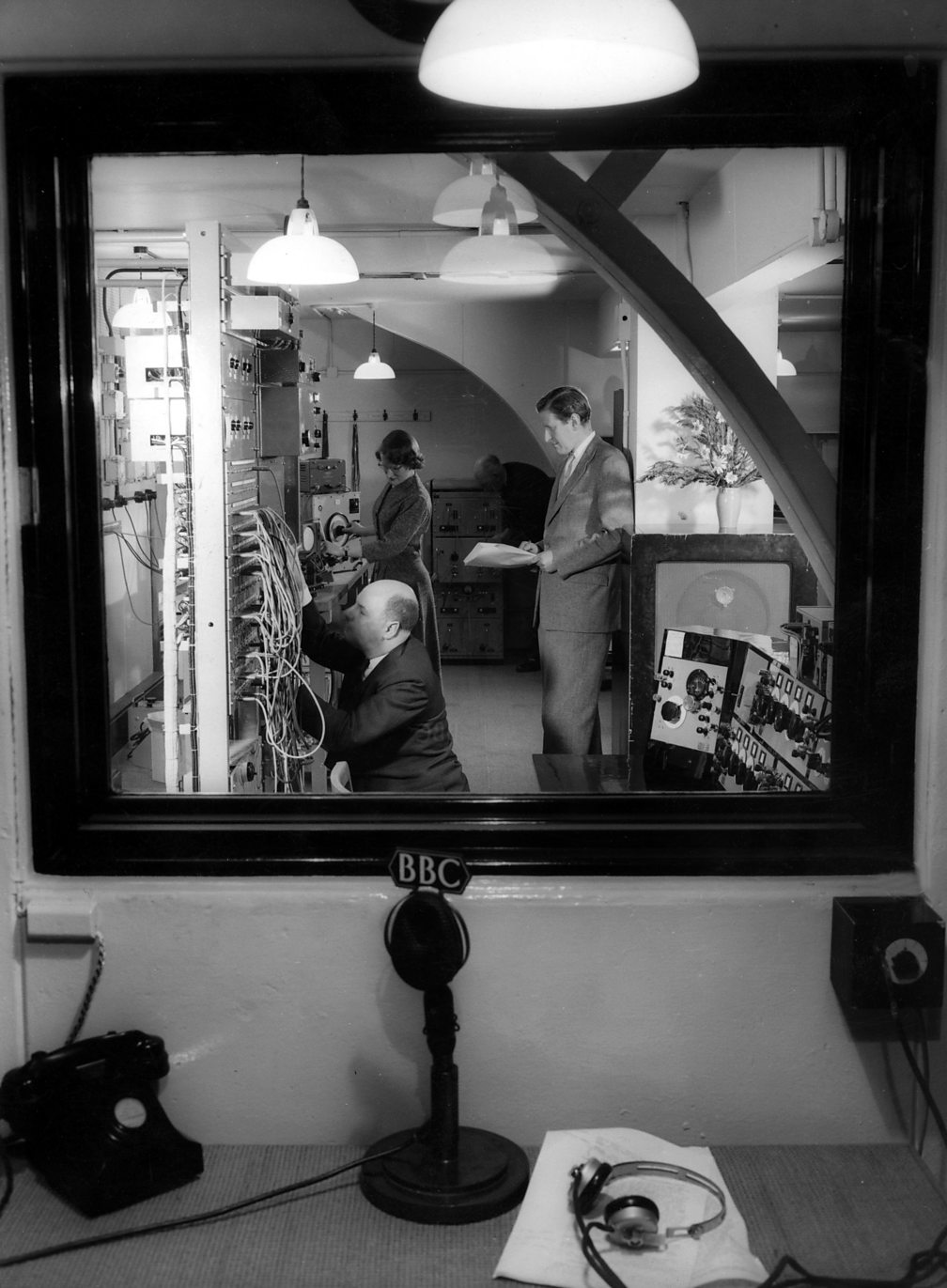 The suite – a studio and workshop – specialised in the construction of new sounds, which were derived from natural sounds (everyday noises), and other sources. They were treated by modern tape recording techniques, filters, and many other technical devices.

In this picture, Donald McWhinnie listens to a montage of electronic effects, with Desmond Briscoe operating filter units in association with particular oscillator sounds controlled by Daphne Oram. Artificial reverberation is being added to these sounds, and Richard Bird is at the machine adjusting the reverberation time. 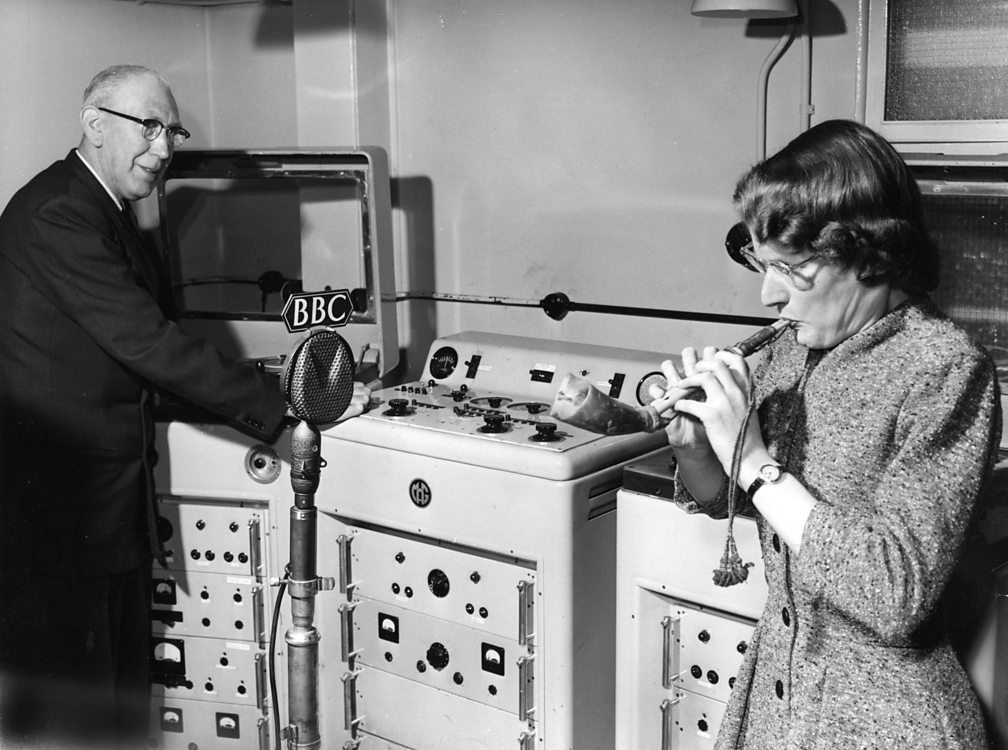 Daphne Oram is blowing a Mijwiz, an Arabic reed pipe, while Richard Bird records the sound on a tape machine. Richard, known as Dickie, was the Workshop’s first engineer. 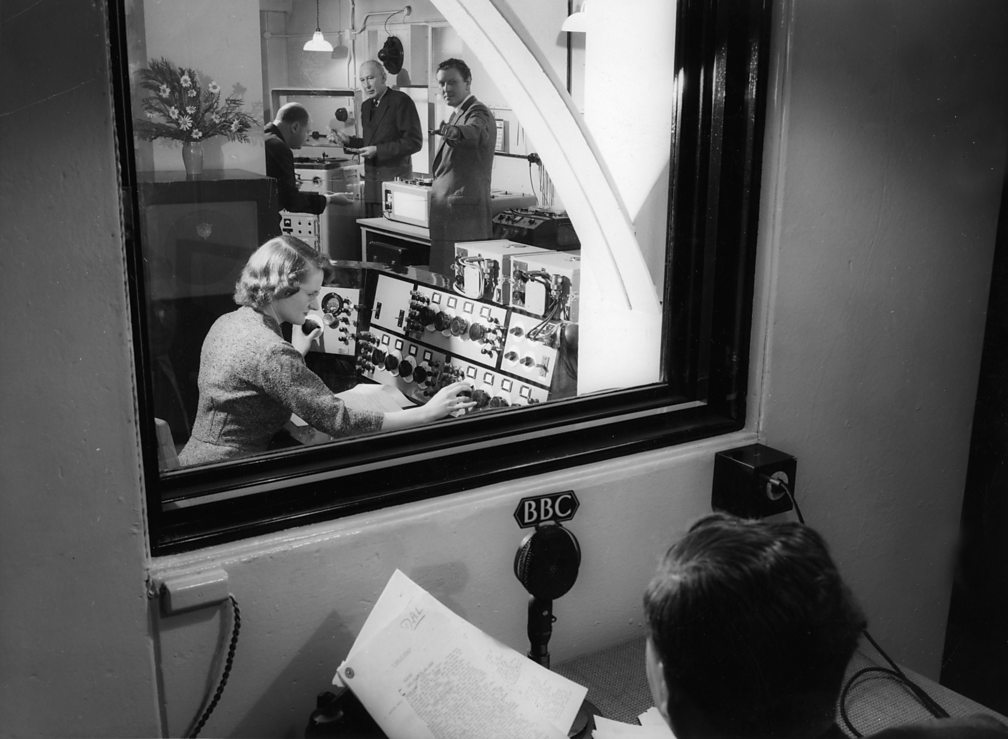 This scene shows an actor in the studio. Daphne Oram is mixing at the control panel, while Desmond Briscoe guides a loop of tape through a tape machine, and Richard Bird prepares to record the next sequence. Donald McWhinnie is the producer. 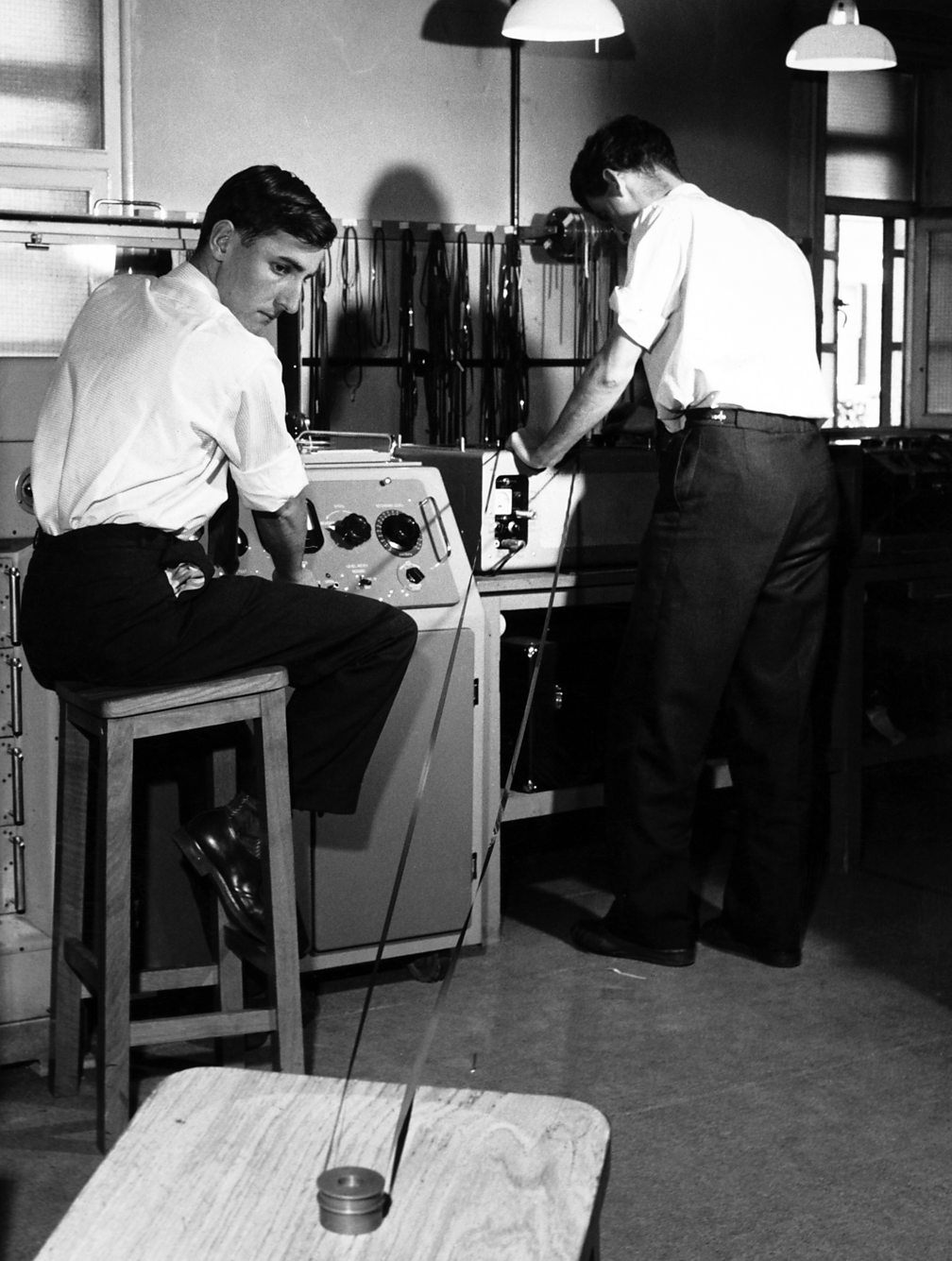 Studio managers Dick Mills and John Harrison working on a tape loop. Many more loops hang on the hooks on the wall. 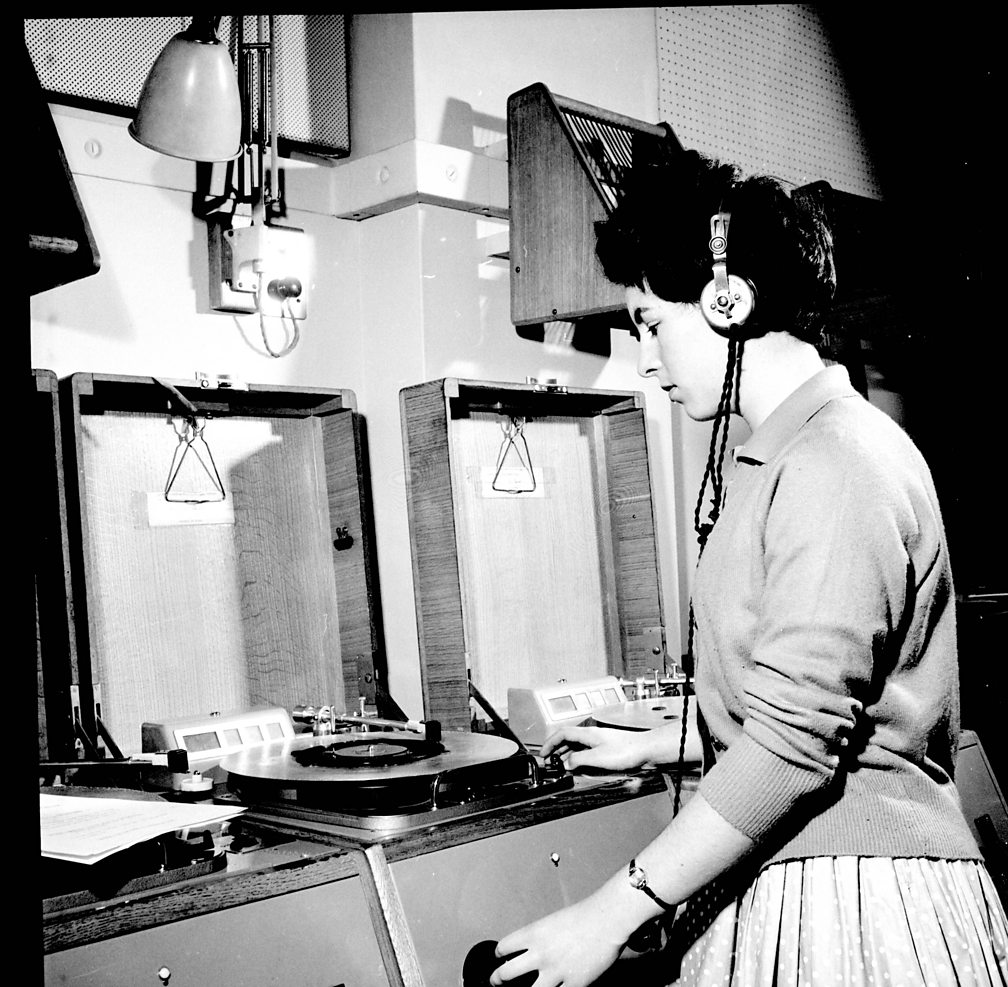 Diane Muir-Jones is playing a 45 on a BBC DRD/5, which was based on the Garrard 301 – a very collectable and highly regarded ‘idler wheel’ turntable. 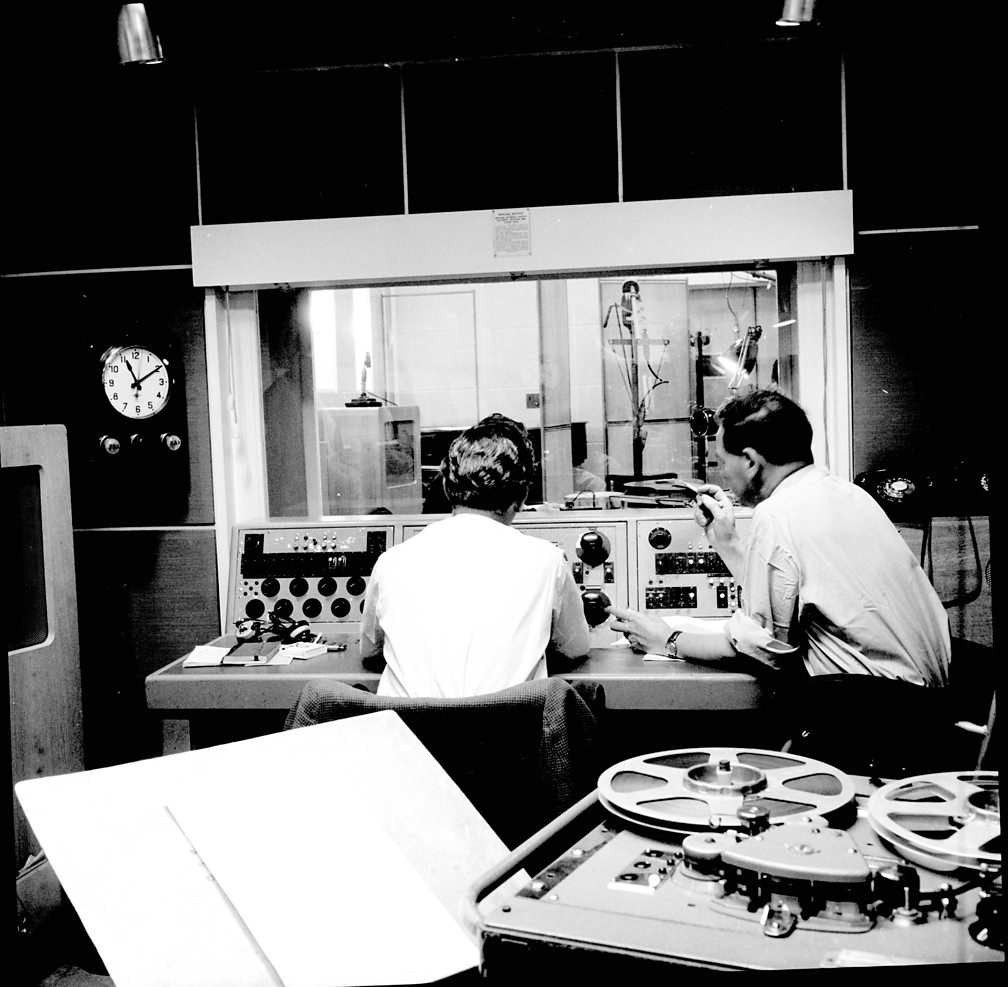 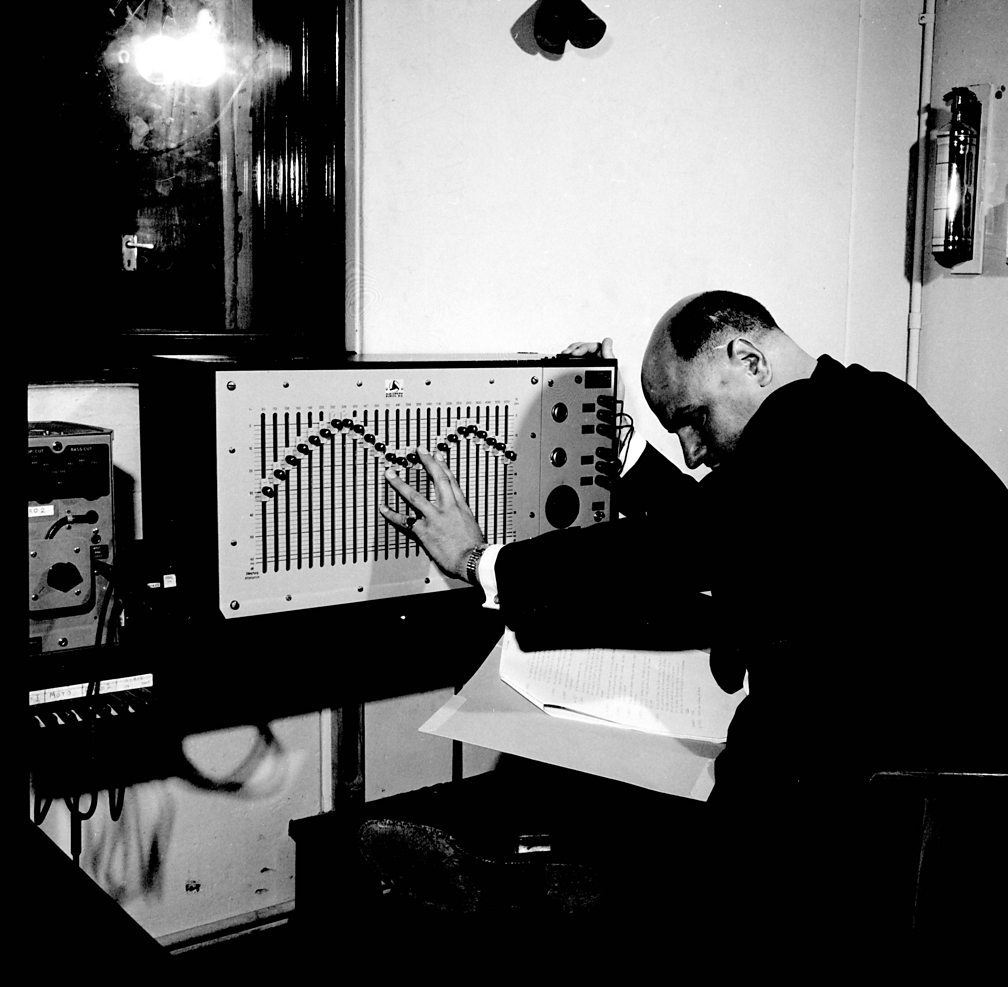 Desmond puts a ‘shape’ on the third-octave filter in the Radiophonic Workshop. 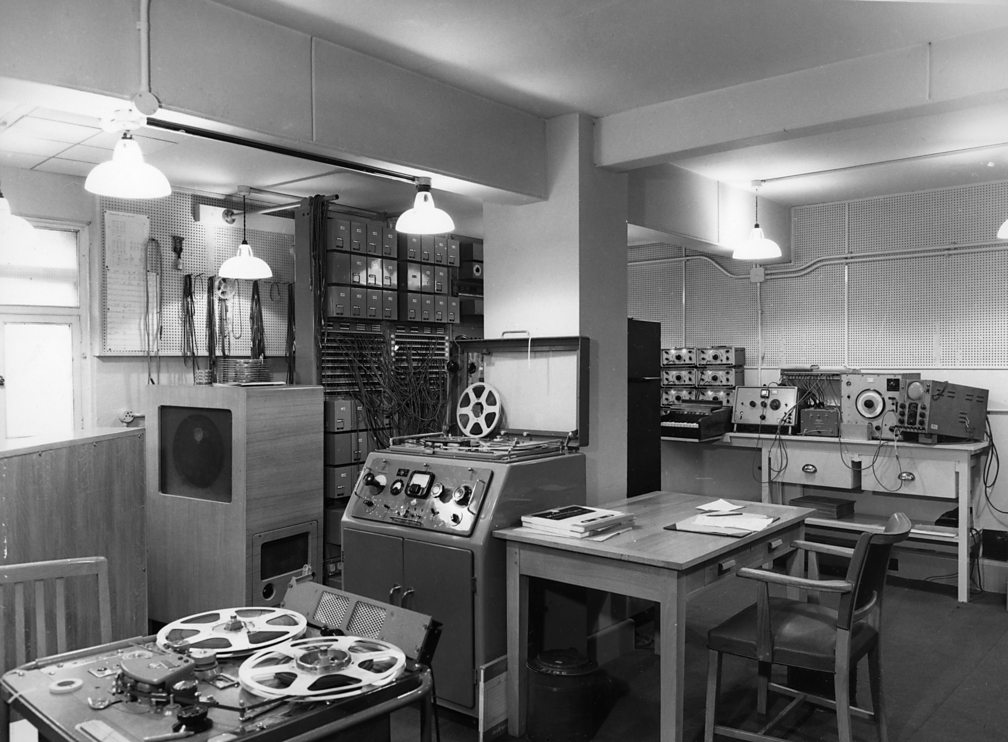 This is one of the few shots in the archive where you can see the studio at rest. The managers and engineers certainly kept it tidy. 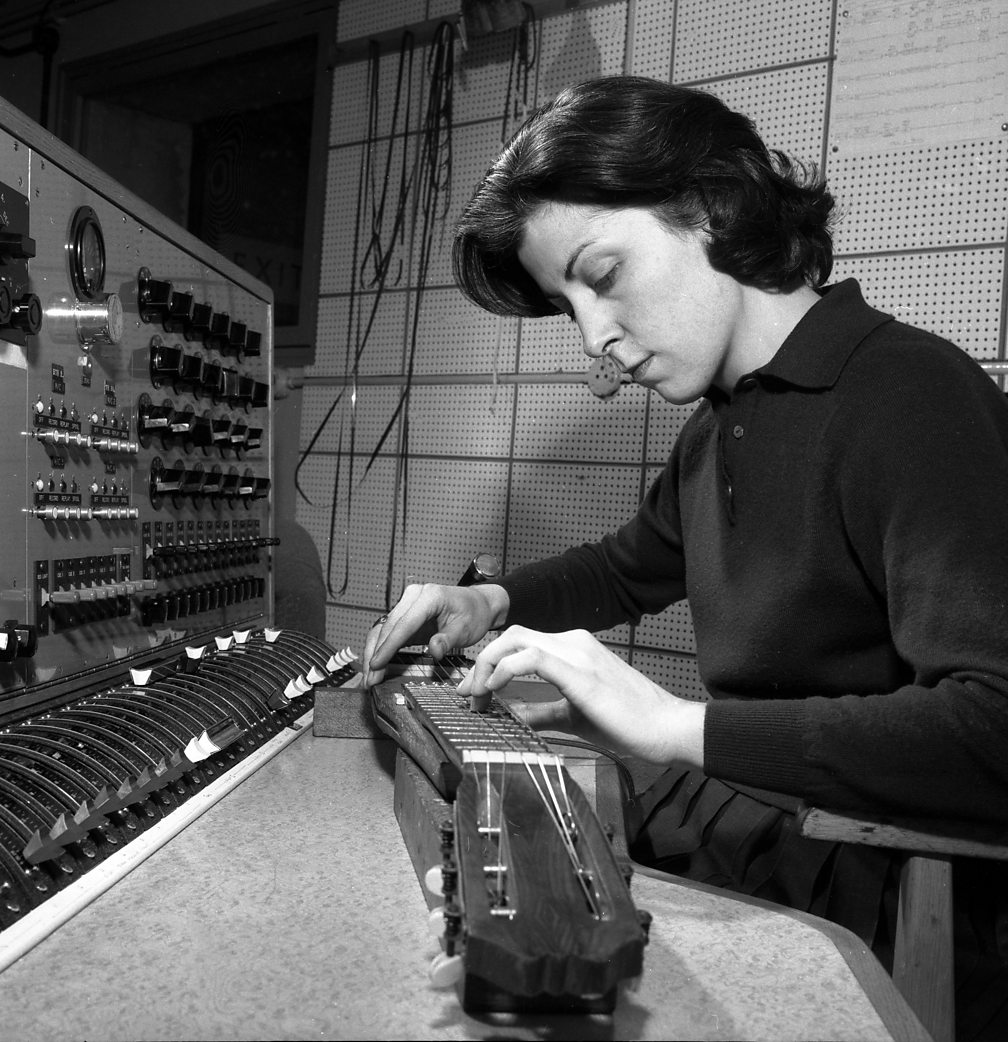 Maddalena Fagandini was at the Workshop from 1959 to 1966. A transplant from the BBC’s Italian Service, her work involved creating jingles and interval signals, using musique concrète techniques. In the year this picture was taken, one of Fagandini’s interval signals, Time Beat, was reworked and commercially released by Ray Cathode, or George Martin as he was really called. He met The Beatles soon after. 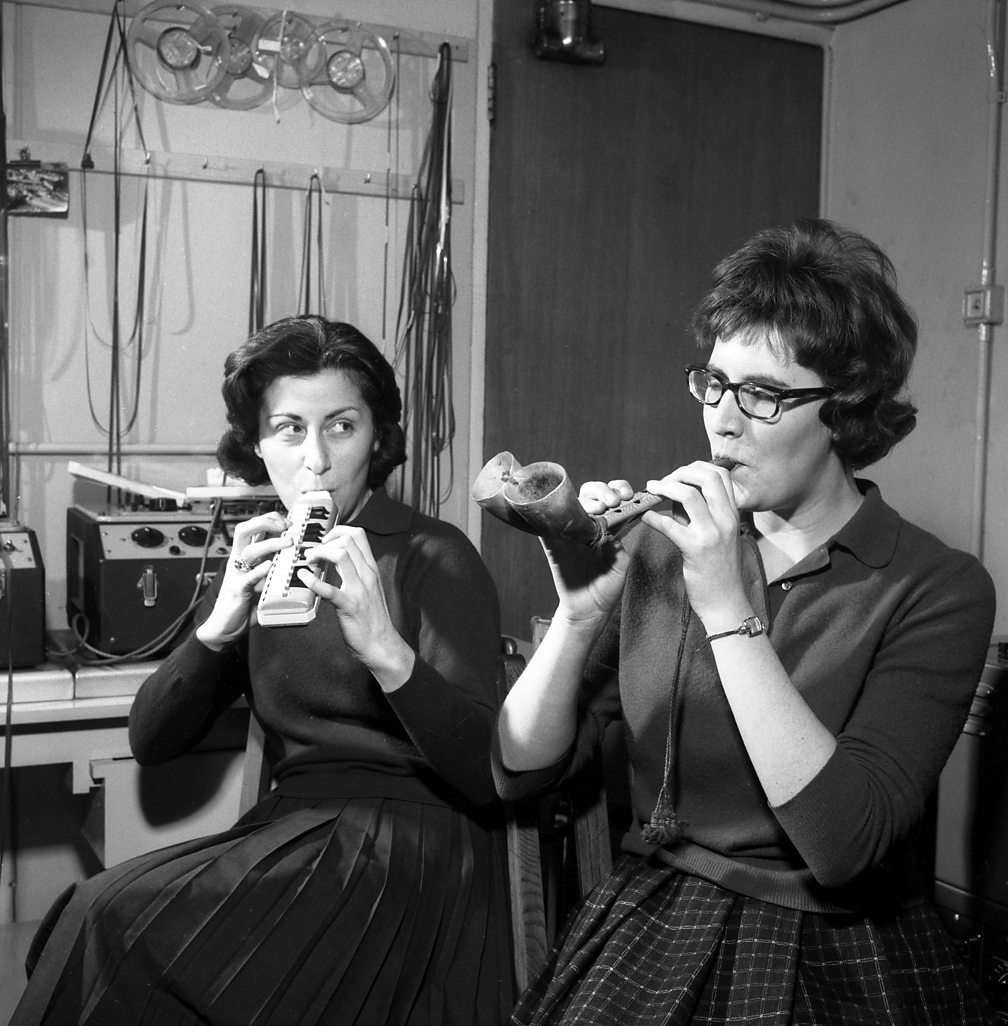 There’s the double-horned Arabic reed pipe again – clearly a favourite to bring out when there’s a photographer visiting the Workshop. 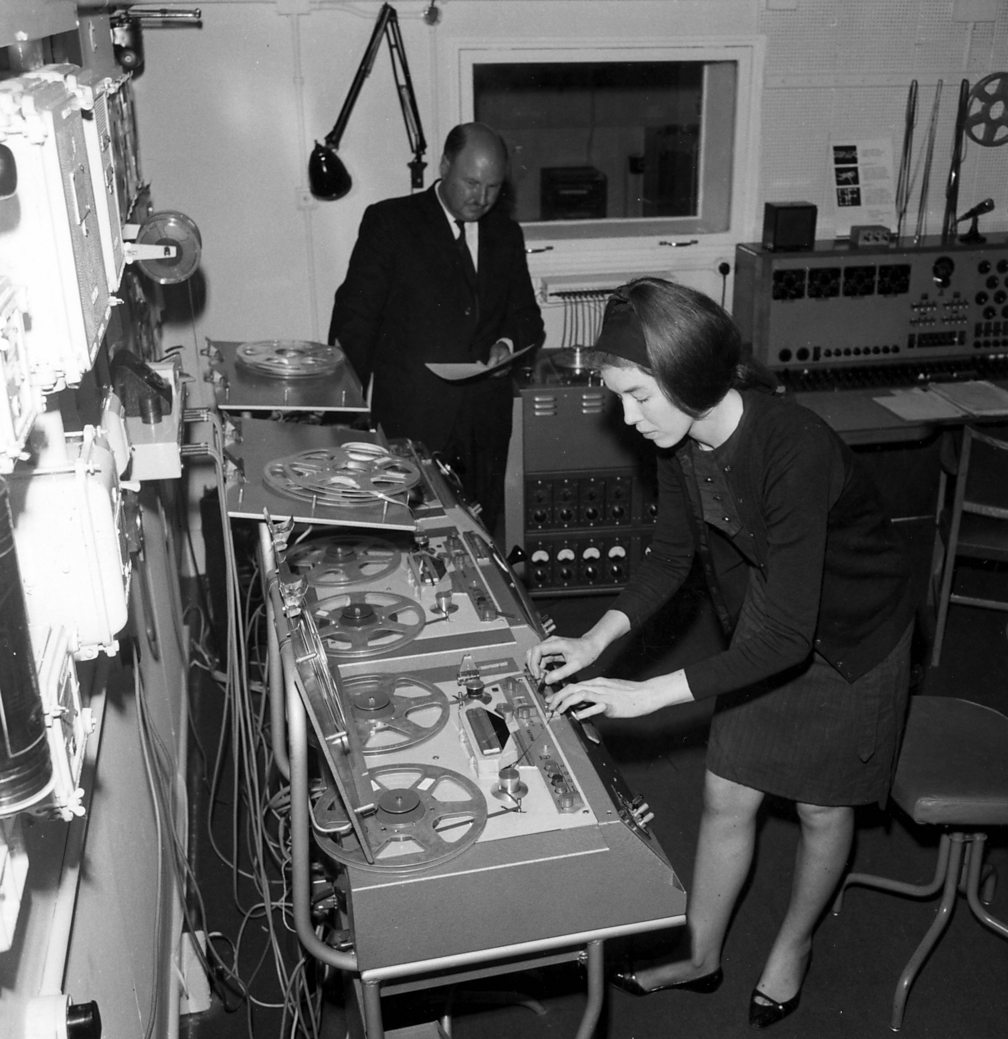 Perhaps the Workshop’s best-known employee was Delia Derbyshire, who became famous for reimagining Australian composer Ron Grainer‘s idea for a Doctor Who theme tune. With the assistance of Dick Mills, Derbyshire created a legendary and hugely influential piece of electronic music. Many of her other works are highly celebrated too, including Blue Veils and Golden Sands, and The Delian Mode.

Delia Derbyshire is pictured here two years after realising the theme. She’s editing a musical note on tape, with Desmond Briscoe in the background. 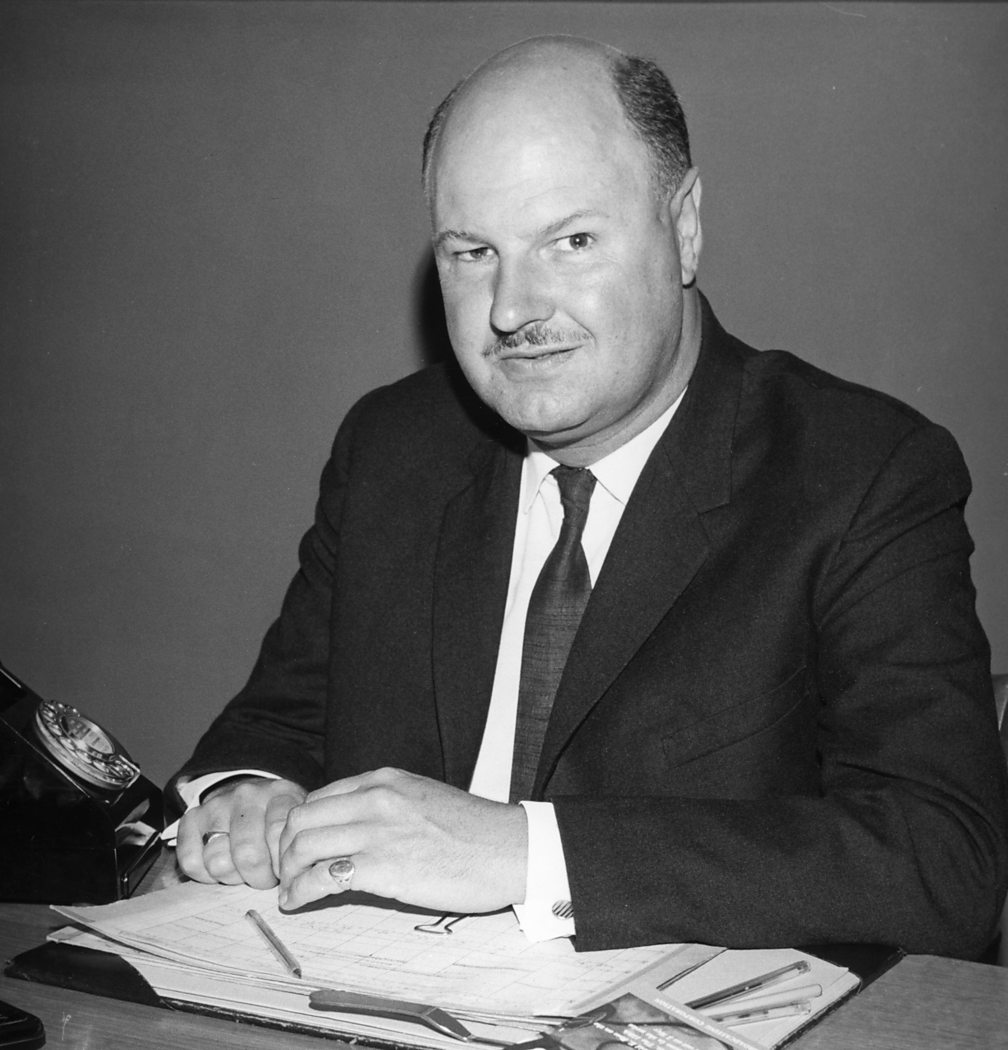 Portrait of Desmond Briscoe, photographer unknown. Desmond was the Workshop’s co-founder and original manager. In 1983, with Roy Curtis-Bramwell, he wrote a retrospective of the Workshop entitled The First 25 Years: The BBC Radiophonic Workshop. 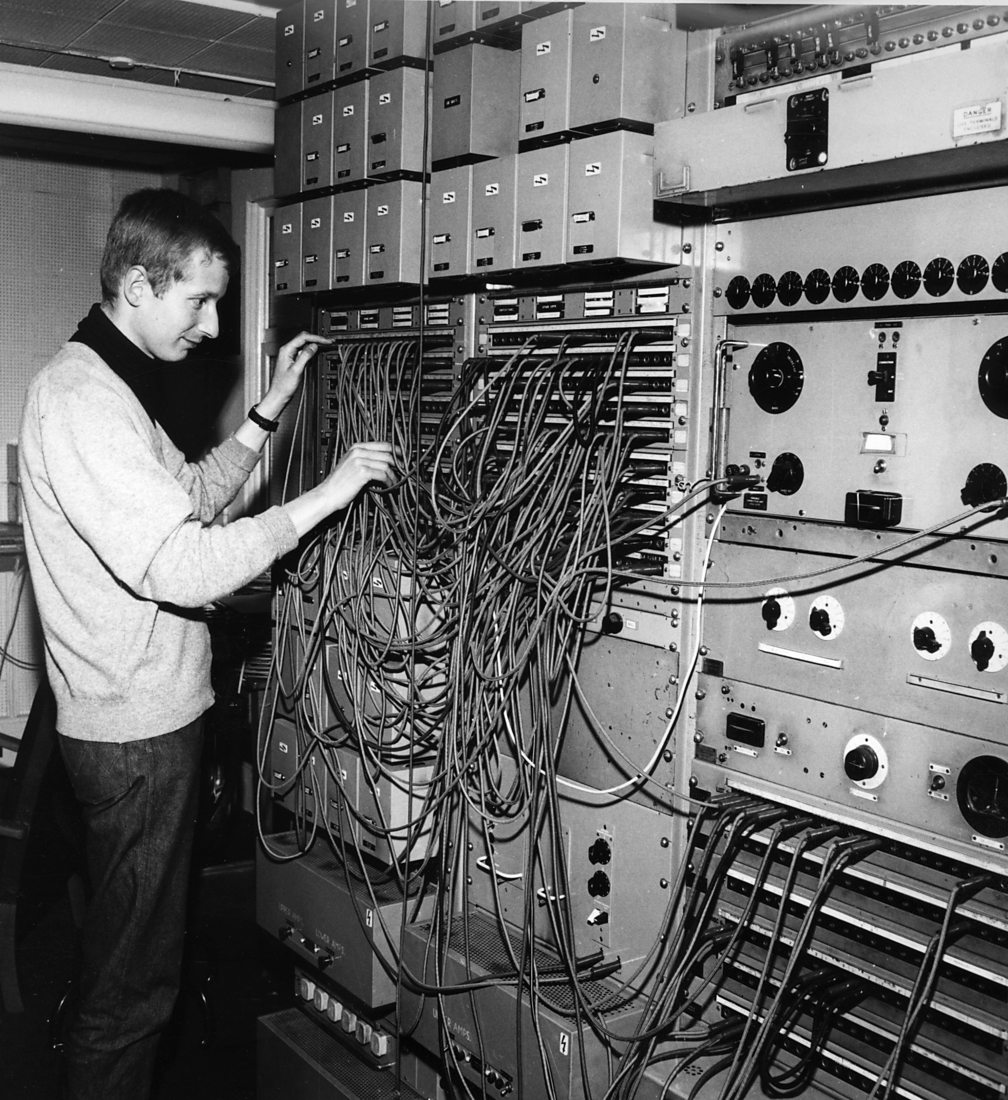 John Baker re-directs a sound. John was a jazz pianist who educated at the Royal Academy of Music. He was a Workshop employee from 1963 to 1974. 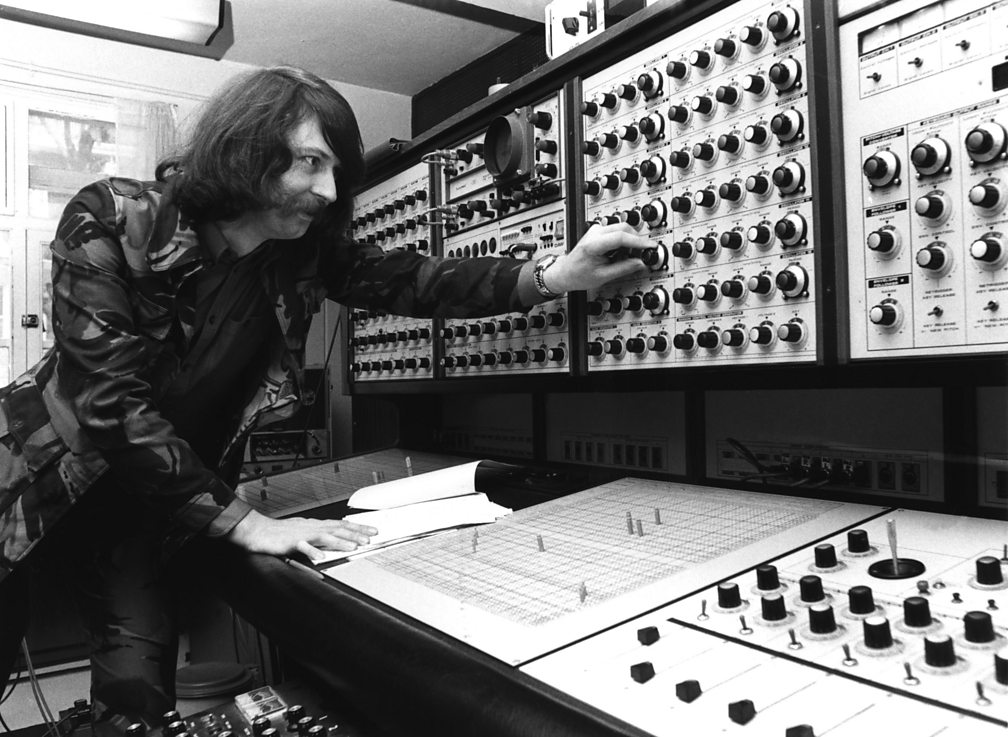 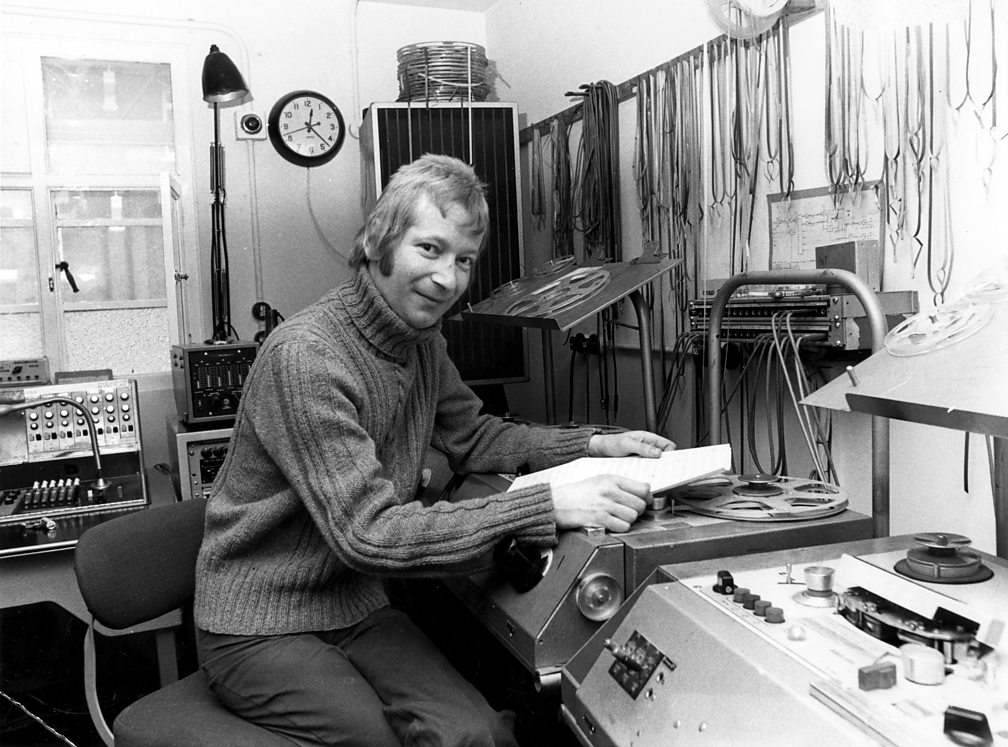 Here’s John during his last year at the Workshop. The photograph was taken by Dave Edwards in March, 1974, hence the heavy, and very 70s, knitwear. 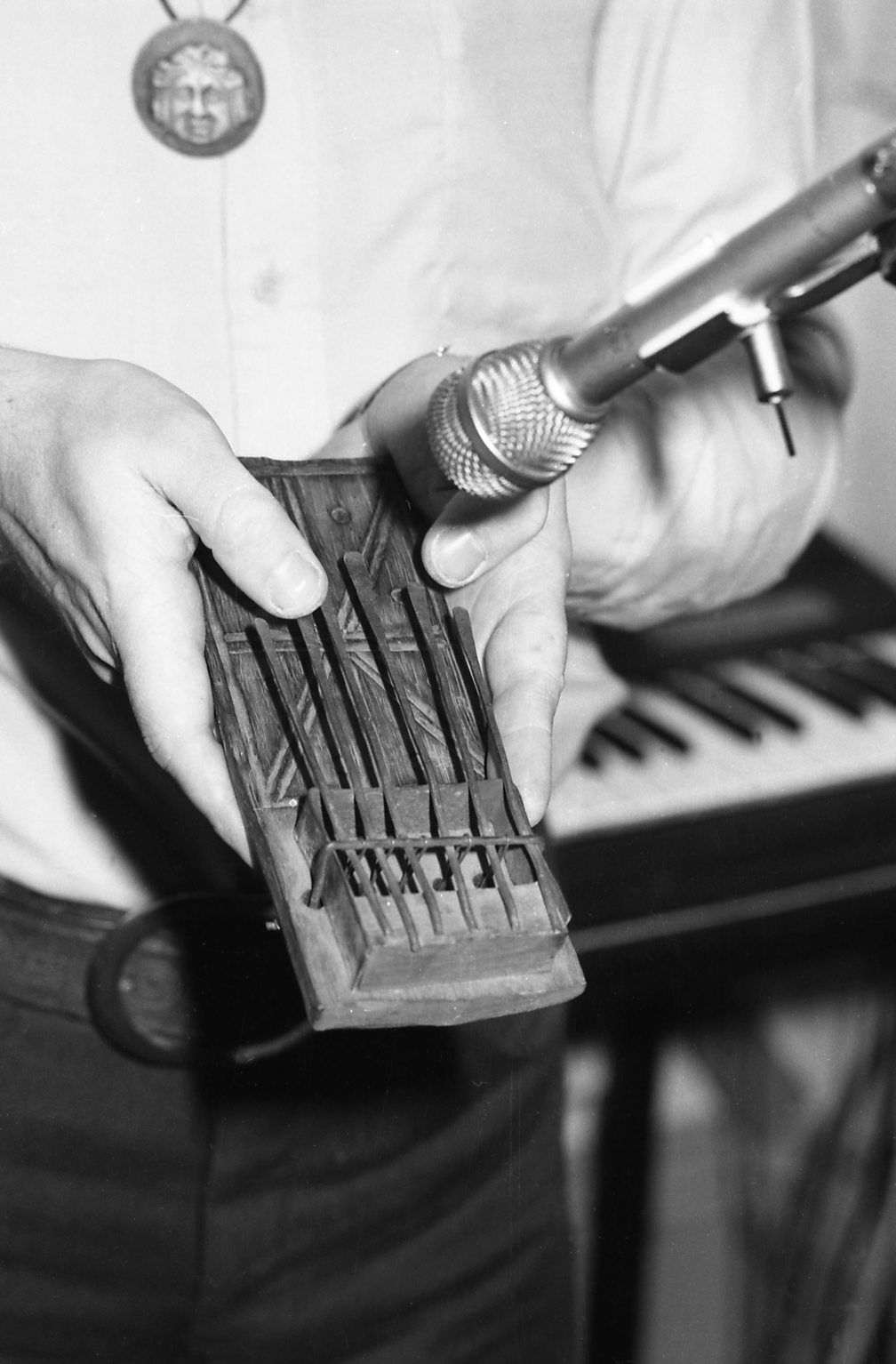 In their search for unusual sounds to record, the Workshop technicians would use any instrument that looked interesting. Here’s a staff member playing a mbira, or thumb piano. 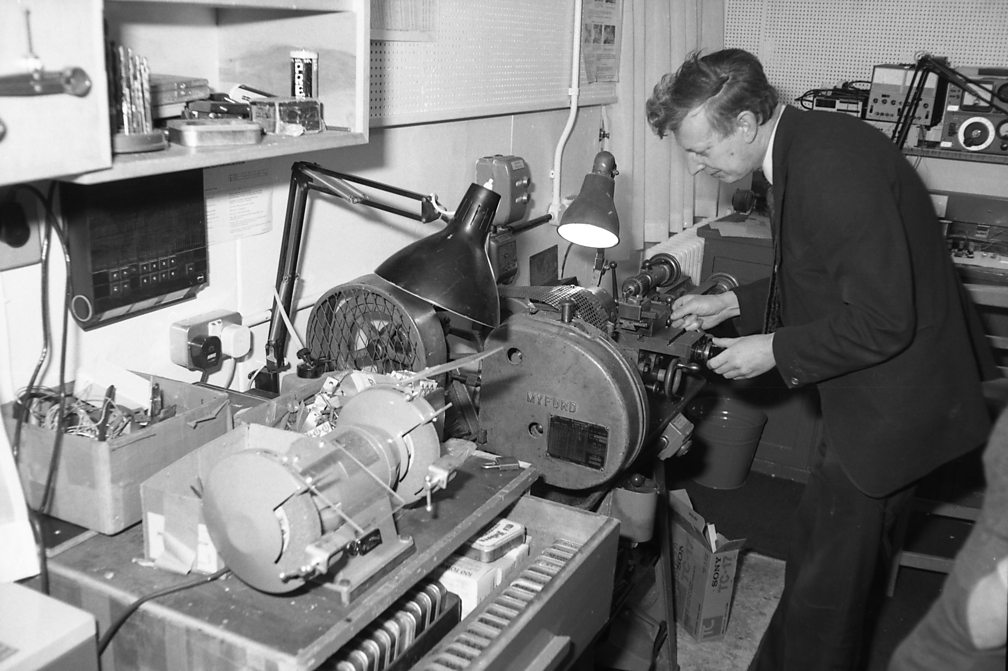 This photograph looks like it could have been shot in the 1960s. It’s actually from 1982. The Radiophonic Workshop: where formal studio dress and the side-parting survived. The history of the Workshop mirrored dramatic changes in technology in the second half of the 20th century. By the 1980s, the opportunities for composers had vastly increased. 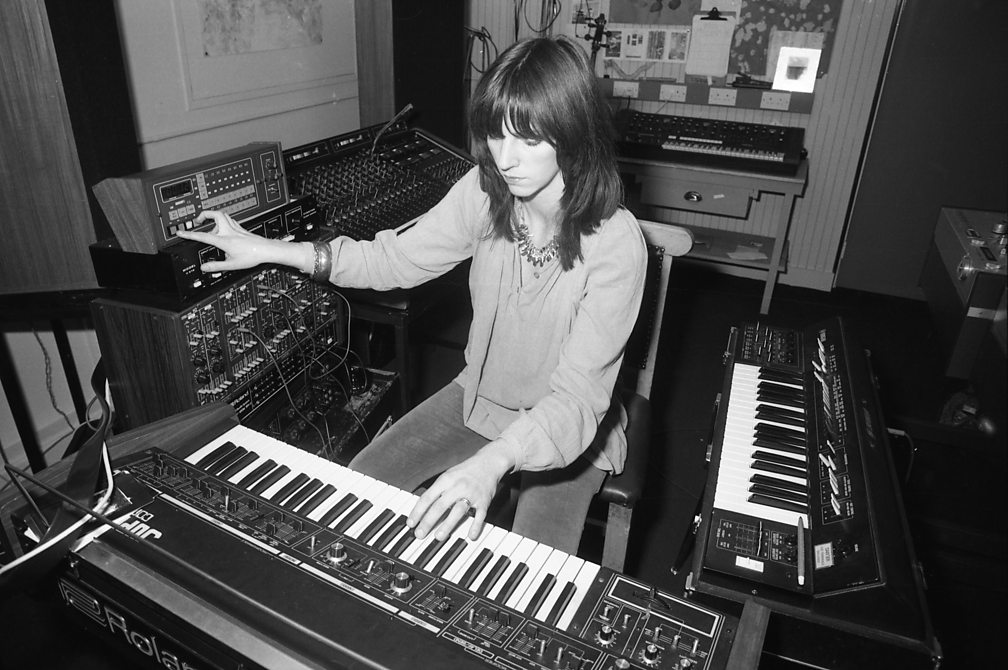 Elizabeth Parker started at the Workshop in 1978 and is perhaps best-known for providing special sound for the BBC science fiction series Blake’s 7, Doctor Who and David Attenborough’s 1984 ground-breaking 12-part series, The Living Planet. 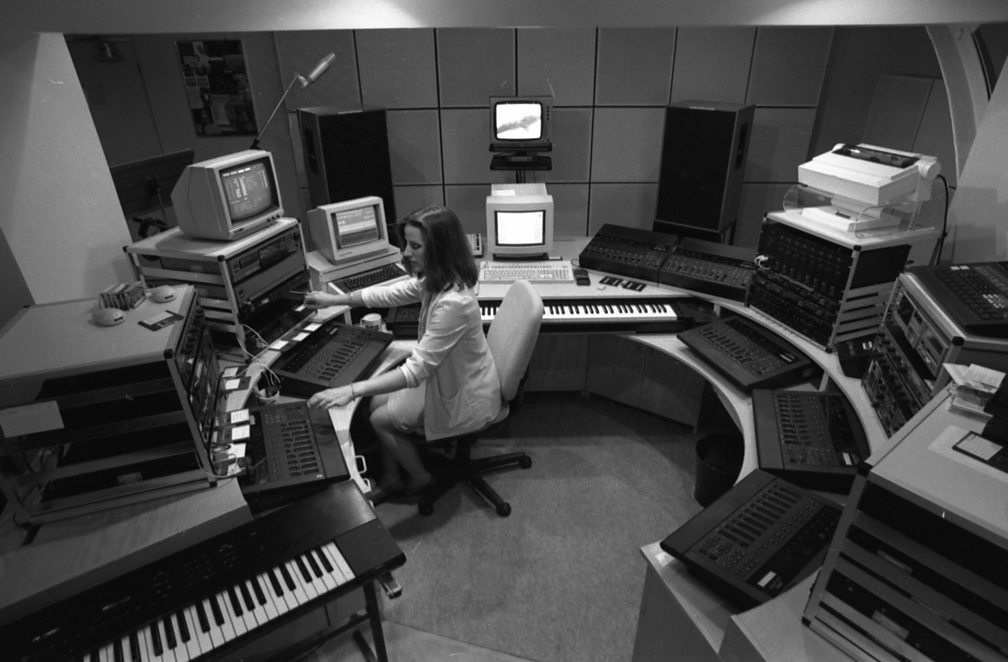 By Phil Hebblethwaite
https://www.bbc.co.uk/music
Tweet
This entry was posted on 8 August, 2018 in homepage. Bookmark the permalink.