Save the Nonconformists Graveyard from the Attack of the Skyscrapers .
.
Boris Johnson has single-handedly approved a development that will negatively impact on one of London’s most unique historic sites.
.
http://www.islingtongazette.co.uk/news/heritage/bunhill_fields_tower_block_plan_disappointment_as_mayor_approves_11_storey_building_1_4413734
.
Bunhill Fields on City Road is now going to have to suffer the construction of a massive development right by its side. Four buildings are due to go up on City Road, two of them skyscrapers of eleven and ten storeys.
.
Islington Council had argued against the plans along with cultural organisations such as the Blake Society and Ancient Monuments Society.
.
In a flagrantly arrogant move, the Mayor of London ‘called in’ the plans. This meant that local government no longer had any say in the matter and that power to approve or disapprove the development was then solely in the hands of one Boris Johnson. After carrying out a ‘detailed assessment’ he quickly gave the go-ahead for the development.
.
The fait accompli has been carried out before serious campaigning could get under way and before most people had even heard about it. The issue not only concerns locals but Londoners in general, and Britons in general, as well as fans of English literature – and especially William Blake – who live all over the world.
.
Bunhill Fields is a legendary space in the heart of the City of London. A non-conformists’ or dissenters’ graveyard, it hosts the graves of three of England’s most famous writers: William Blake, Daniel Defoe, and John Bunyan. All were noted non-conformists who rejected the authority of the Church of England and produced both secular and spiritual works of literature that have found a permanent place in the literary canon.
.
The tombs of Bunyan, Defoe and the gravestone of Blake stand near one another forming what Iain Sinclair has memorably called ‘the triangle of concentration.’ The new development will tower over the exact spot. 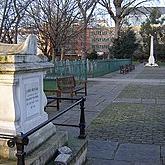 Bunhill Fields is not just a graveyard but a beloved public park and a vital green space in one of the most congested, polluted areas of London. It’s a great place to walk through, or take a sandwich, or read a book. Regular gatherings happen there, poetry readings, even wedding celebrations.
The space itself will still be there, but it will be seriously deprived of light and sunlight by the Monmouth House development. The Mayor believes that more office space is necessary, but does anyone else? Offices are everywhere, dissenters’ open spaces are rare.
.
Campaigners regard Bunhill Fields as a truly special area, and it should not have to suffer the despoliation of a major building project with all its attendant noise and disruption and inconvenience, not to mention the permanent damage to the skyline.
.
As yet, not a brick has been laid. PLEASE SIGN AND SHARE THE PETITION TO ASK THE MAYOR TO CHANGE HIS MIND.