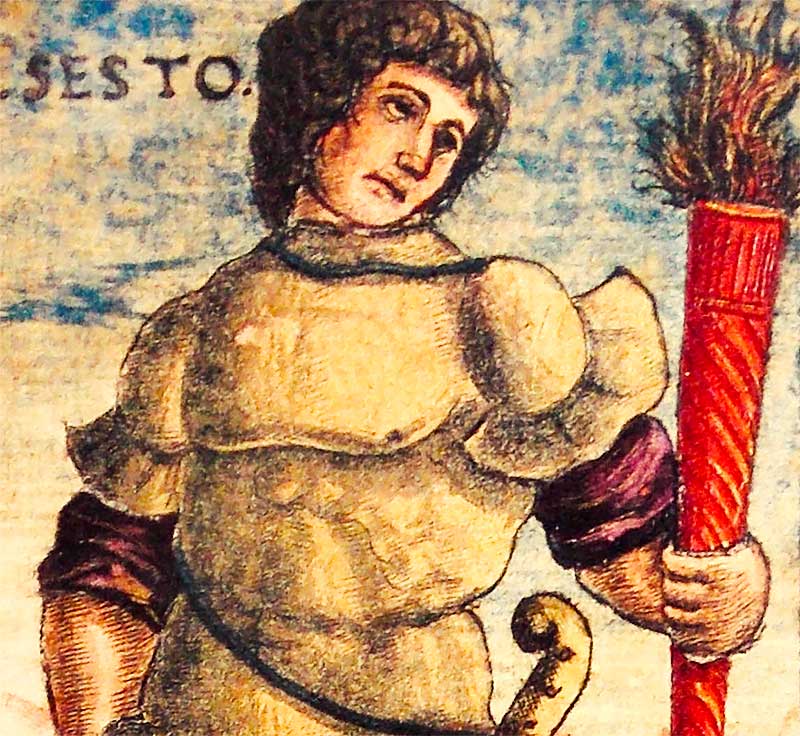 Whatever you think of the predictive power of tarot cards, the story of how humanity has produced them and put them to use provides a fascinating cultural history of the last 500 years or so. We’ve featured a variety of tarot decks here on Open Culture, mostly from the past century: decks designed by Aleister Crowley, Salvador Dalí, and H.R. Giger, as well as one featuring the characters from Twin Peaks. But today we give you the oldest extant example, and a highly distinctive one for reasons not just historical but aesthetic: the Sola-Busca tarot deck, dating from the early 1490s, which L’Italo Americano‘s Francesca Bezzone describes as “78, beautifully illustrated cards, 22 major arcana and 56 minor arcana, engraved on cardboard and hand painted with tempera colors and gold.” 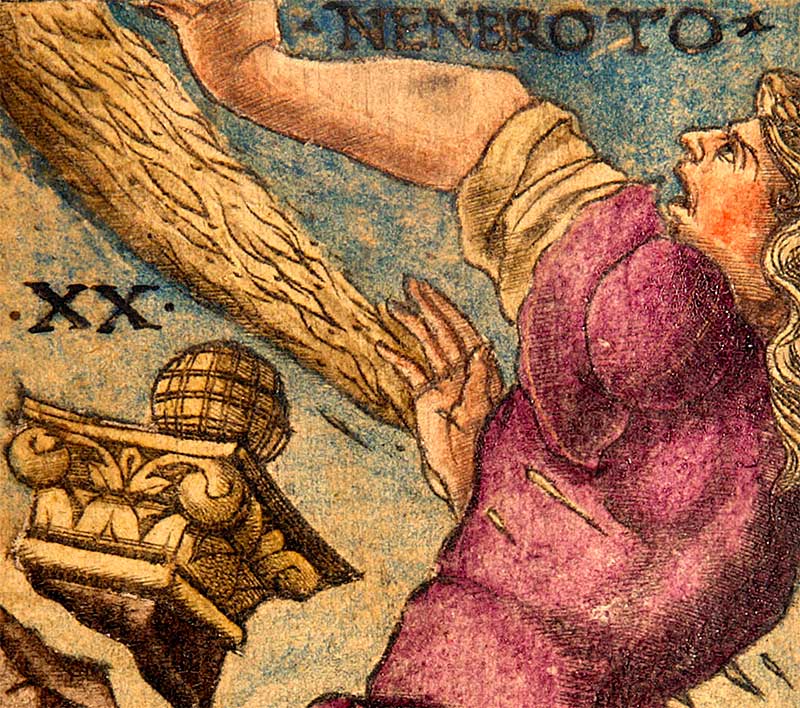 The Sola-Busca tarot deck, whose name derives from those of its last two owners Marquise Busca and Count Sola, set a structural precedent for decks to come by being divided into those sets of major arcana (or “major secrets”) and minor arcana (or “minor secrets”).

In the cards of the major arcana, which trace the rise and fall of the Roman Empire, “Classical and Biblical figures take the place of traditional tarot illustrations: for instance, the arcana of justice is Nero and that of the world is Nebuchadnezzar. Among others represented Gaius Marius, uncle of Juluis Caesar, and Bacchus,” as well as now more difficult-to-identify personages from later centuries. The minor arcana cards, writes Bezzone, “are also different from all other decks’, because they are finely and richly illustrated with scenes of daily life.”

But even the everyday images contain secrets: “This is particularly evident in the suit of coins, which apparently illustrates the process of coin minting, but in reality alludes to the complex and secret practices of the Opus Alchemicum, that is, the method used to create the lapis philosophorum, the philosopher’s stone, alchemic instrument of immortality and perfection.” But “in spite of the refined and delicate artistry behind their illustrations, the name of the man, or men, who created them remained shrouded in darkness for centuries,” though in 1938 art historian Arthur Mayger Hind determined that, based on the references to the Republic of Venice in the deck’s artwork, its was likely made for a Venetian client, possibly by the engraver Mattia Serrati da Cosandola or, according to another theory, the painter Nicola di Maestro Antonio and historian Marin Sanudo. 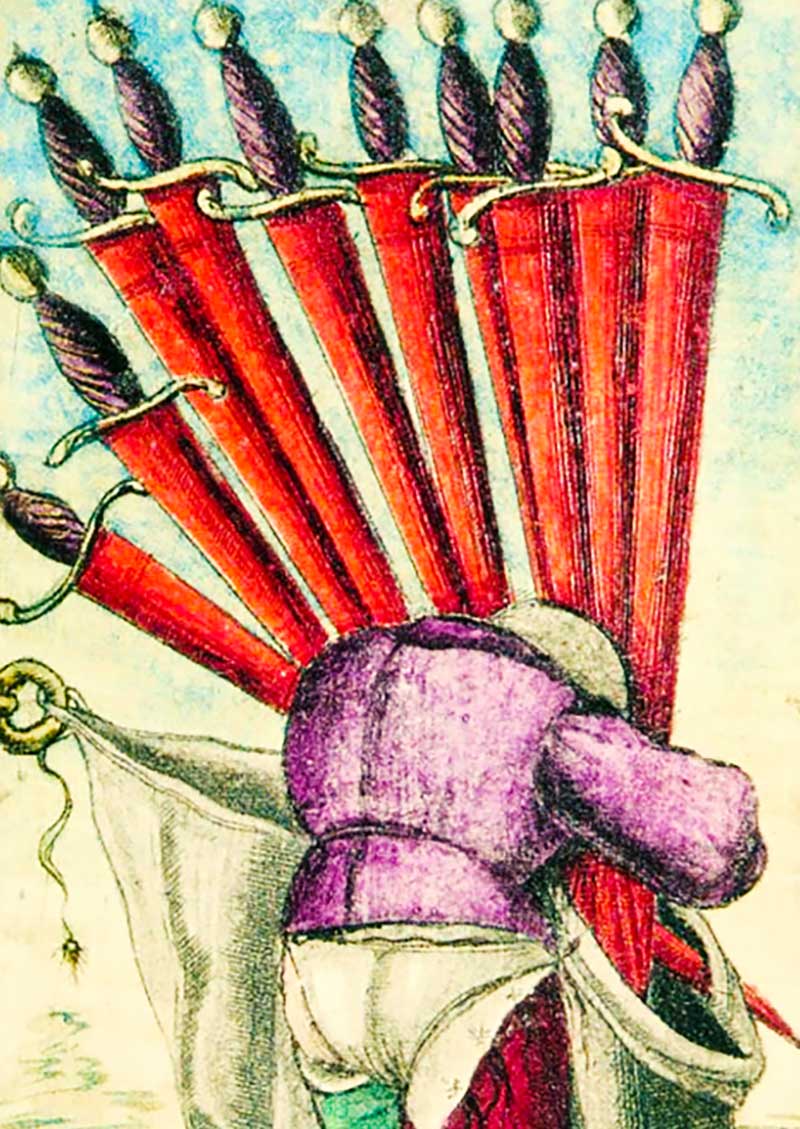 Il segreto dei segreti, an exhibition on the Sola-Busca deck at Milan’s Pinacoteca di Brera gallery, brings another Renaissance figure into the mix: “While largely unknown today, the Humanist and Hermeticist Ludovico Lazzarelli from San Severino Marche played a significant role in Italian court Humanism,” and because of “his personality, role, and interest in Hermetic and alchemical themes” as well as his relations with powerful courts of the day “is believed to have designed the complex iconographical program of the Sola-Busca tarots.” The tenets of Renaissance Hermeticism held that mankind could transform nature by apprehending it, making it in some sense a forerunner to modern scientific thinking. And while the notion that we can see our future in the turn of playing cards may not itself sound wildly scientific, an artifact like the Sola-Busca deck, all of whose 78 carts you can see here, still has more to teach us about our past.

Alejandro Jodorowsky Explains How Tarot Cards Can Give You Creative Inspiration

Carl Jung: Tarot Cards Provide Doorways to the Unconscious, and Maybe a Way to Predict the Future

H.R. Giger’s Tarot Cards: The Swiss Artist, Famous for His Design Work on Alien, Takes a Journey into the Occult

Based in Seoul, Colin Marshall writes and broadcasts on cities, language, and culture. His projects include the book The Stateless City: a Walk through 21st-Century Los Angeles and the video series The City in Cinema. Follow him on Twitter at @colinmarshall or on Facebook.

Tweet
This entry was posted on 13 April, 2019 in homepage. Bookmark the permalink.