While Drinking Coffee at Zingerman’s 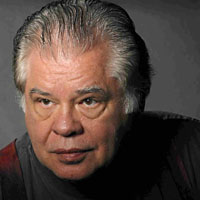 Night of the Congo, wreath

of raped women, horrors beyond

it’s a crumbly basement wall surface, out there

Peter Rabbit,    Eden is enfolded smoke, and the fox has entered

repeatedly raped after being forced to lie on top of

She and her raped daughters then asked the Buddha:

is this what you mean by “suffering?”

dilemma of the absolute in any guise, driving prick

or camauro. Can’t allow religion or

any “spiritual practice” outside of poetry to direct.

in robe of insomnia, and the sweet graze of

underarm, a light rub, what we call “a tickle,”

more commercials than news in 45 minutes,

fuck it, go to sleep, or drift awake…

crowd, a shunt between porous

Is it a good that I can’t fudge a vision on the computer?

Drain of religion armed with the bomb of immortality.

Churches the size of small planets on military bases.

Religion is the locked down imagination of eternal war.

Think of this life as your base, not as your subject.

Be grateful for the asymmetrical lettuce, the design of a bay.

See through hate: it is redolent with rejectitious dread.

Robin Blaser near his end wrote “Language is love.”

Not at Sobibor. Or even in a smashed abortion clinic.

Love and language copulate on an astral plane

And once poetry gets “in between,”

one needs the resistance of “Lachrymae Christi”