SQUID GAME – The Cruels of the Game 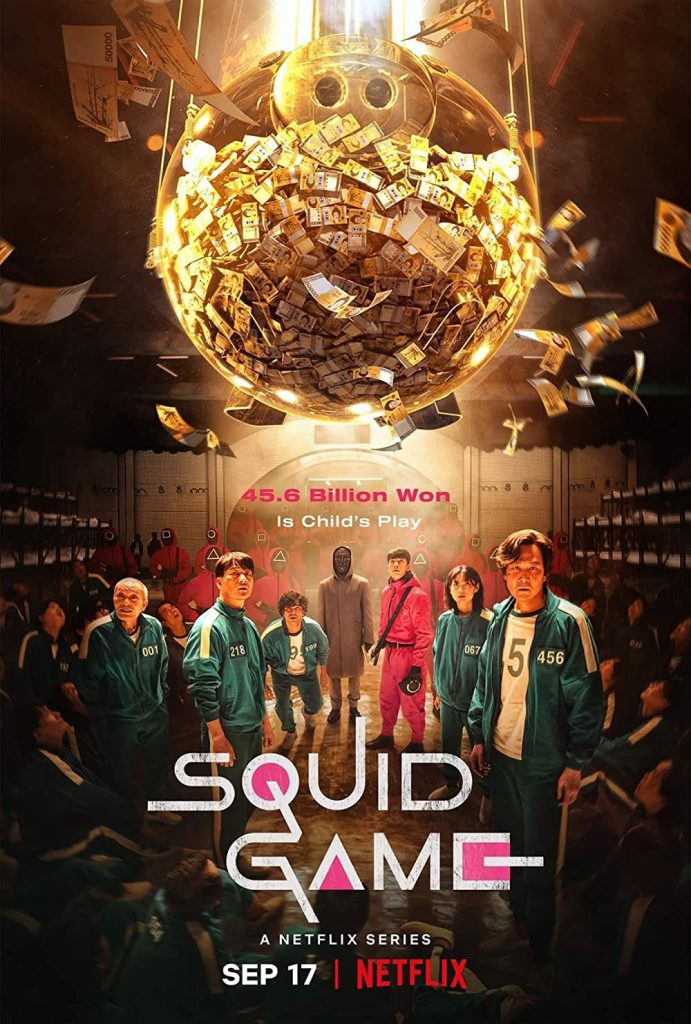 Intrigued by reading about the Netflix series Squid Game, I decided to watch. To say that I loved it is an understatement. I was immediately hooked and binged, without wanting to stop. The criticisms and messages engendered by it are diverse and wide ranging, so getting a clear picture of the story’s intention proved difficult, but this is my overview. 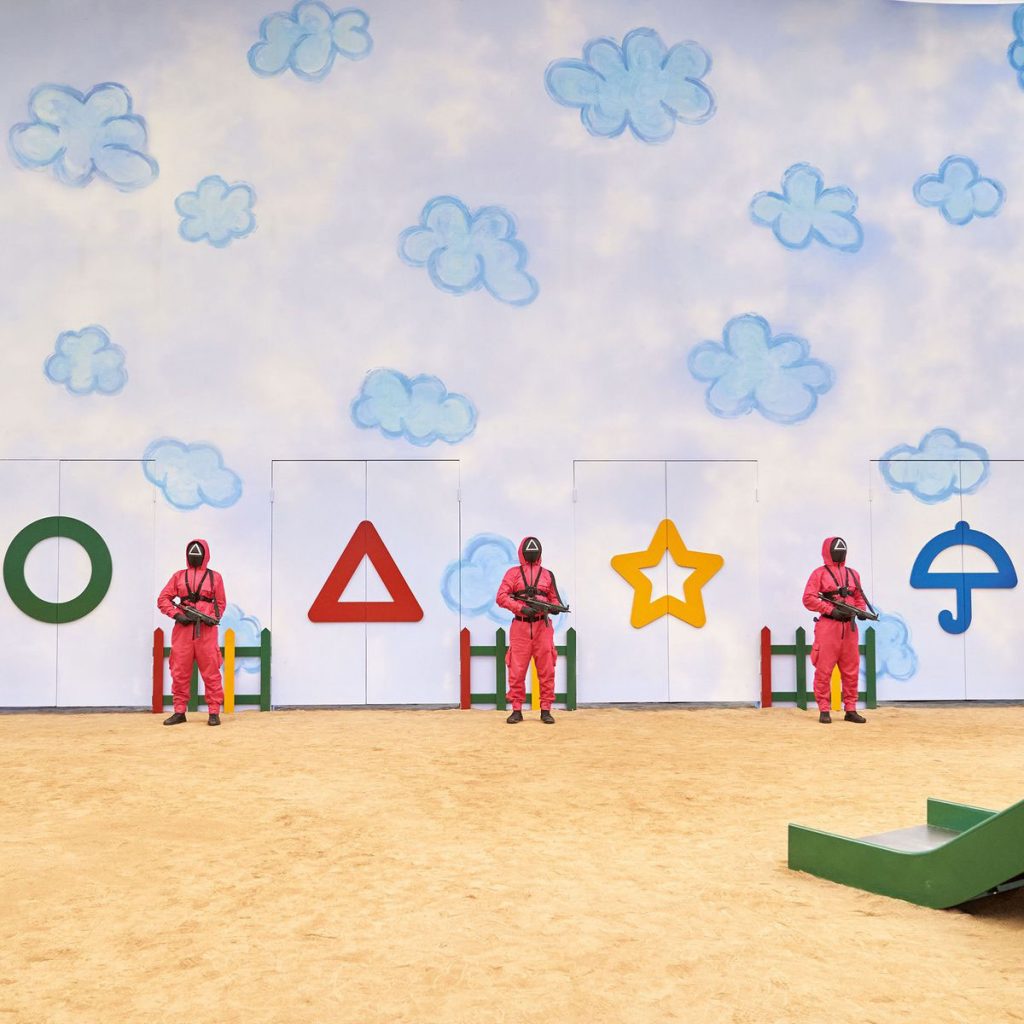 “The Pink Soldiers”. The game guards, whose identity has remained hidden.

This compelling and distressing nine episode story comes from the mind of creator/Director Heang Dong-hyukh, who used many elements from his own experience to reveal the crude facade of the current socio-economic problems of South Korea, problems which resonate with our own in the West. The chillingly realistic scenario reveals the suffocating truth of South Korean capitalism, as the protagonists fight against the exploitation to which they have been subjected. 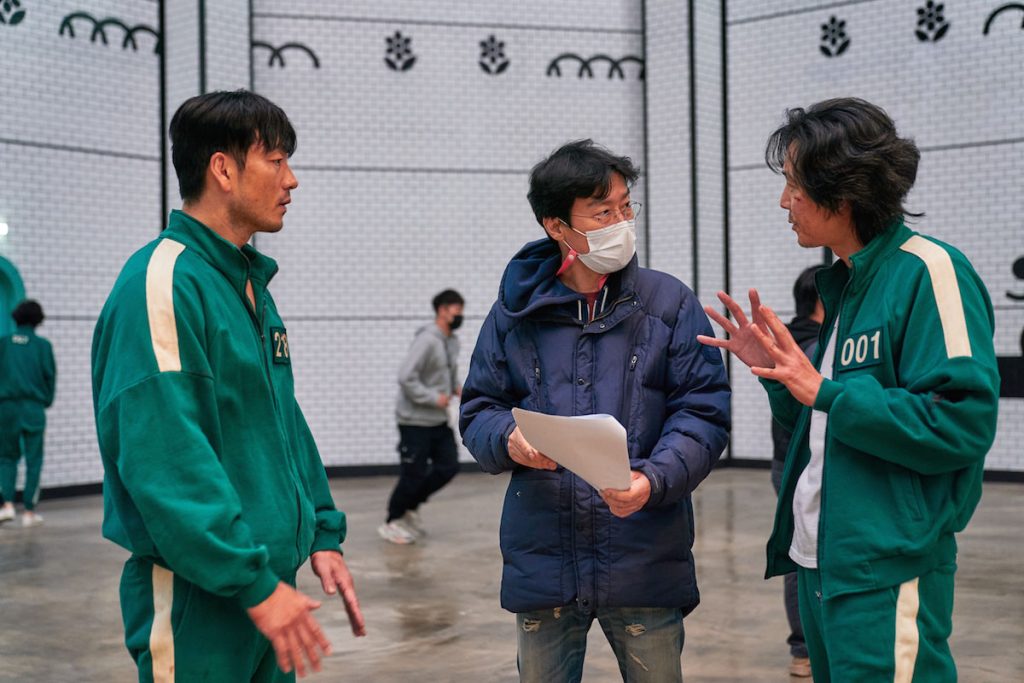 After an initial post-war financial surge, South Korea today is the Asian state with the most serious economic disparity. It is a country of mass unemployment amongst the young, with its economy run by a group of prestigious companies that crush citizens with the highest levels of social pressure. There is even a phrase in Korean which describes the act of borrowing money in an attempt at achieving the same economic well-being of the previous generation.

The Covid pandemic only served to worsen the situation. The government relaxed its rules on lending, giving young people easy access to vast amounts of money, causing a drastic spike in levels of debt. It is no coincidence that South Korea is one of the largest cryptocurrency markets.

In this series the players are all practically strangled by debt and participate in the game with the sole aim of saving themselves both physically and economically; an aspect that echoes the plight of many young South Koreans, who describe their country as a hell, where living there resembles wandering down unlit streets without knowing when the darkness will end.

There has been no lack of criticism from political factions, as the series reveals, where the entire competition is condemned; being seen as an exercise in humiliation by the right-wing, as it reveals to the whole world SK’s confidential dynamics, and a cause of real concern to the left in what it says about the national character. 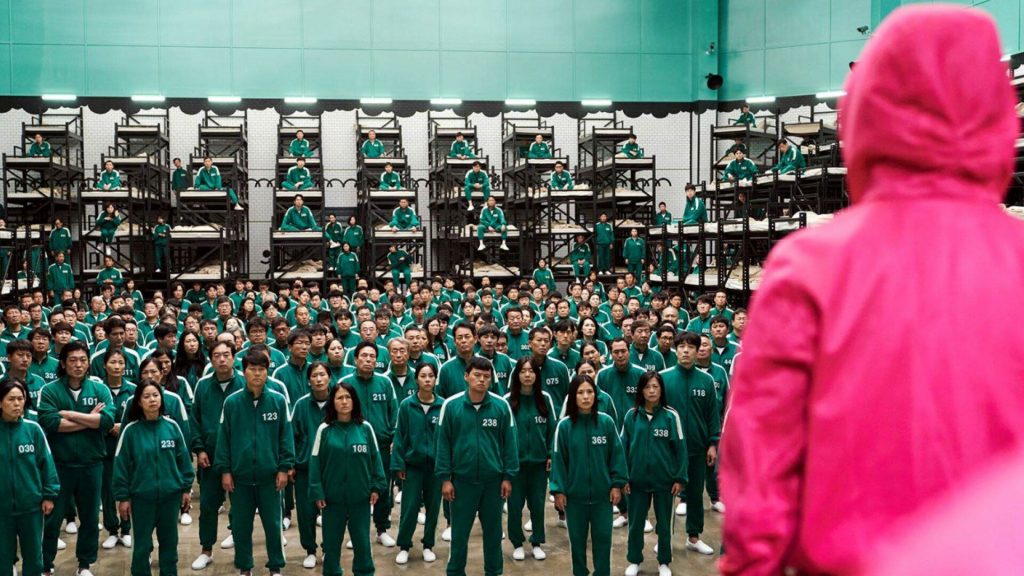 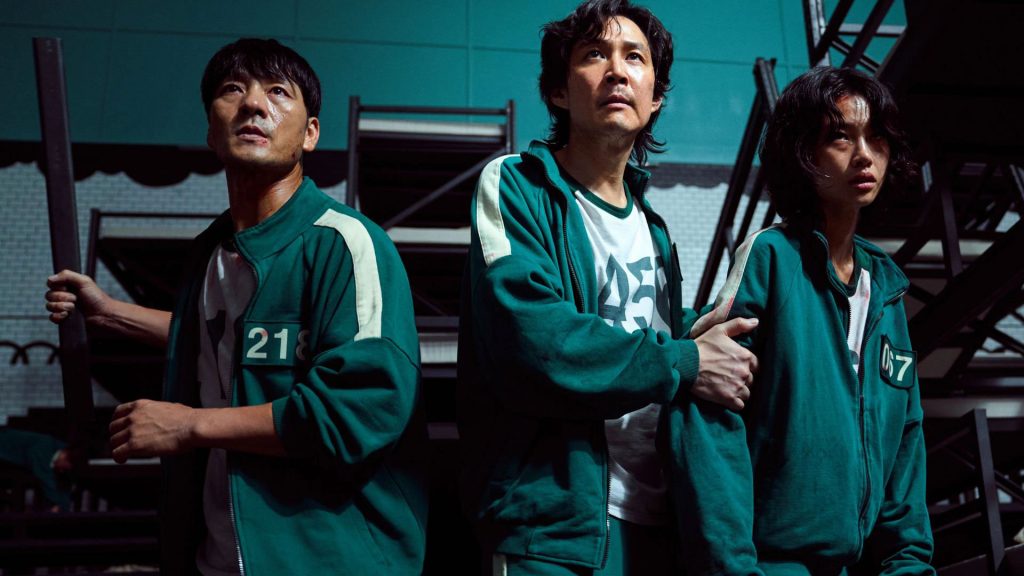 In short, the plight of 456 financially challenges people to accept a strange invitation to a deadly competition where, with a lot of money at stake, solutions to their problems are promised that ideally should solve their problems. We are shown the range of issues that stem from this level of dysfunction as the characters try to cope with this profound tension, from ineffective modes of behavior to personality disorders.

These people are destined to fail in this society, the victims of a system that reveals that no matter what sum they win, nothing will ever really change for them and that they are destined to remain actors in a much bigger drama than they could ever understand. Squid Game is a window on a murderous, ruthless and corrupt society, in which power obliterates the rights and very personality of the individual,  and where the rules are no less absurd and cynical than those slimy and devious ones to which we are all subjected to in the real world. The rules inside the game weren’t all that worse than the rules outside the game in each participant’s real life. Squid Game is a tragedy, part horror fable and part urban noir that demonstrates how everyday life can be both oppressive and unbearable. 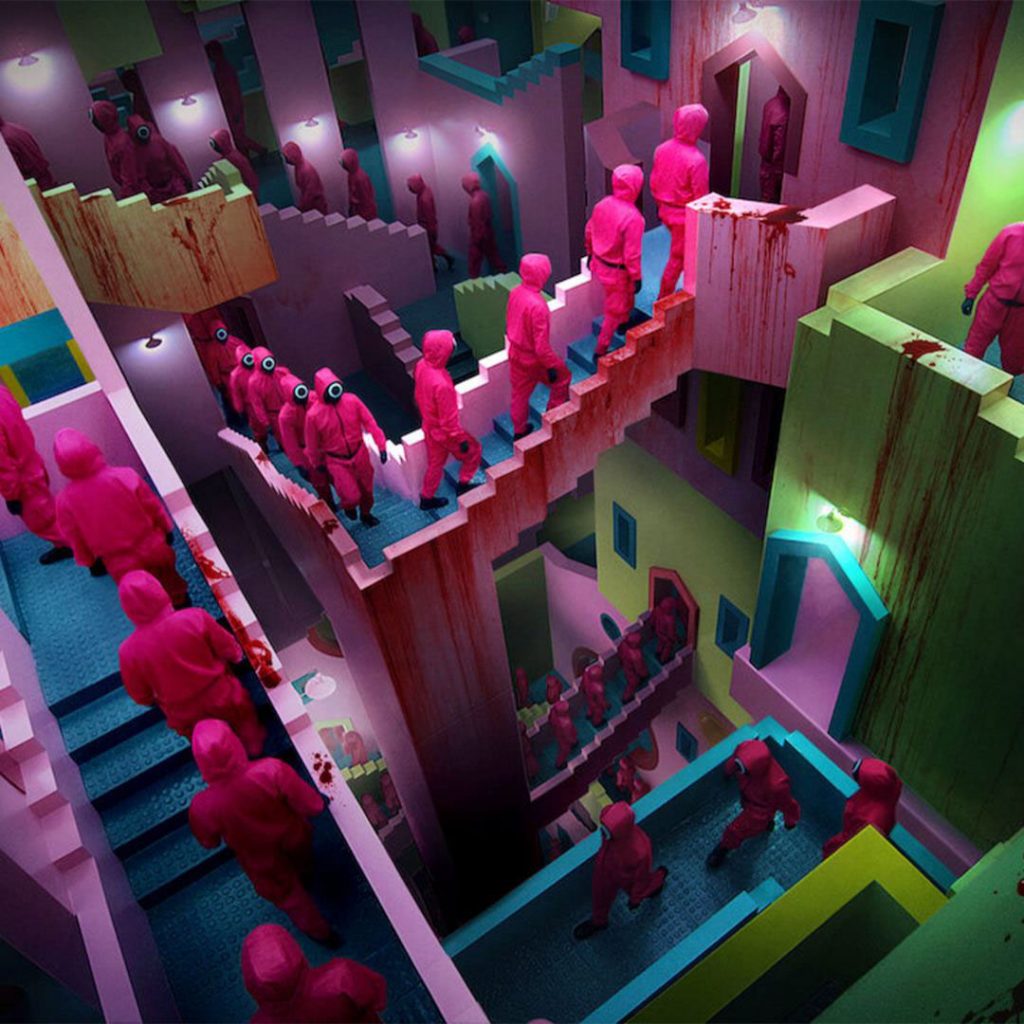 On a psychological level, Squid Game accurately describes what can be defined as the greatest source of stress for the contemporary human being, namely, the economic hell in which all of us, rich or poor live. An economic hell that has a second side, a kind of refuge of fictitious relief, a world of hefty gratification, which allows people to endure the increasingly vampiric system, while continually draining the life force. In this series, all the frailties to which we are exposed are covertly expressed, from substance abuse to genetic disorders, along with a range of variables that have a profound impact on our destiny. Furthermore, we are all immersed in a system that is also based on rather dystonic aspects, such as the logic of large numbers, or on the notion of mass consumption, consumerism and marketing, each points on a hierarchical pyramid, that alters the mind for the worse and creates capitialistic wellbeing. The opposite extreme, of the dispossessed, and the great poor of the earth, form the base of the pyramid, while between these two extremes, the middle class to which most people belong, live a turbulent existence, always oscillating between happiness and disaster.

This balance is of course precarious, and the middle class featured in Squid Game are exposed both to great opportunities and to the prospect of ruin, should they reject the official edicts of capitalism, from the buying of property to certain modes of employment to aforementioned crypto currencies. Economics makes us all prisoners through the demands of earning and draining our wages. In this context even a moments pleasure becomes narcotic, and yet we continue wasting money on unhealthy habits, those deadly traps we regard as our “satisfactions”.  This series deals with these brutal aspects, showing a loop of dopamine-like addictions; the negative cycle of consumerism that reduces us all. 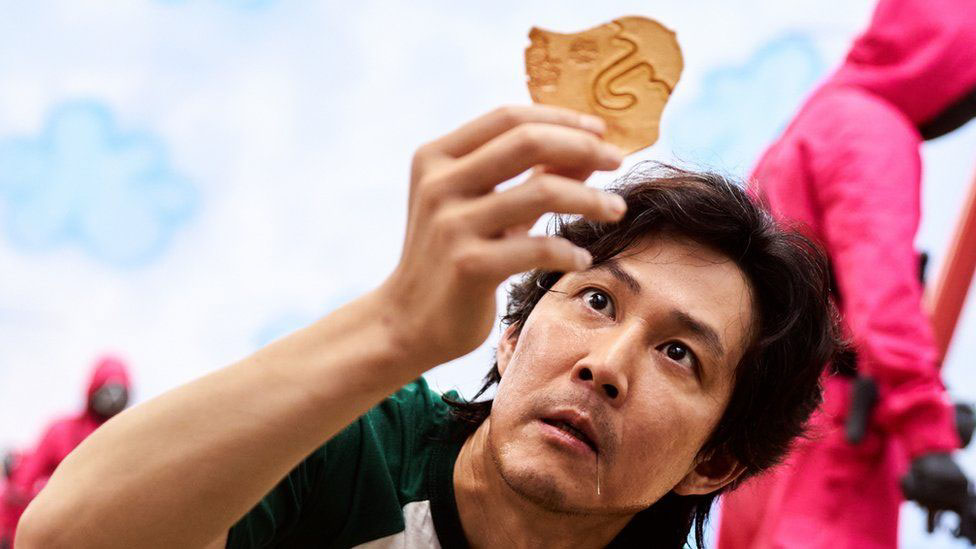 The protagonist Seong Gi-hun, number 456, played by Lee Jung-jae, in the scene of an episode during one of the deadly games.

Many commentators have argued that this series is harmful to young people. They clearly do not see the educative benefit, as young people can surely see that the deadly game is not the competition to which the competitors are subjected, but that of the society that allows it. Scenes of violence and murder show how with every single person killed there is a crude depiction of individual exasperation, as each participant’s life is a literal living death, and a far worse reality than the one they risk here. 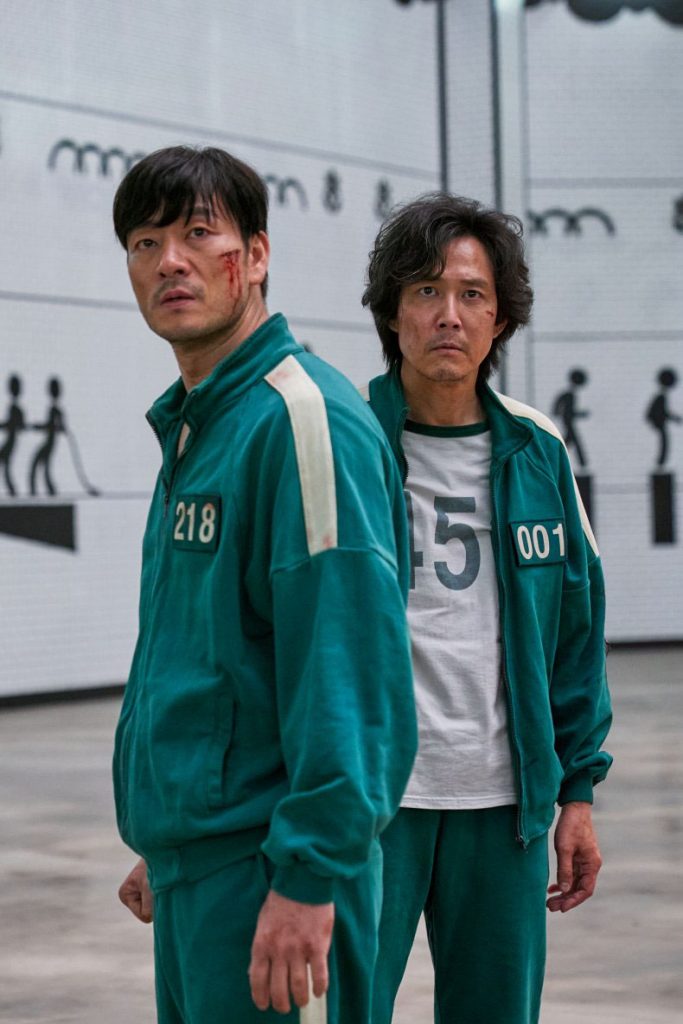 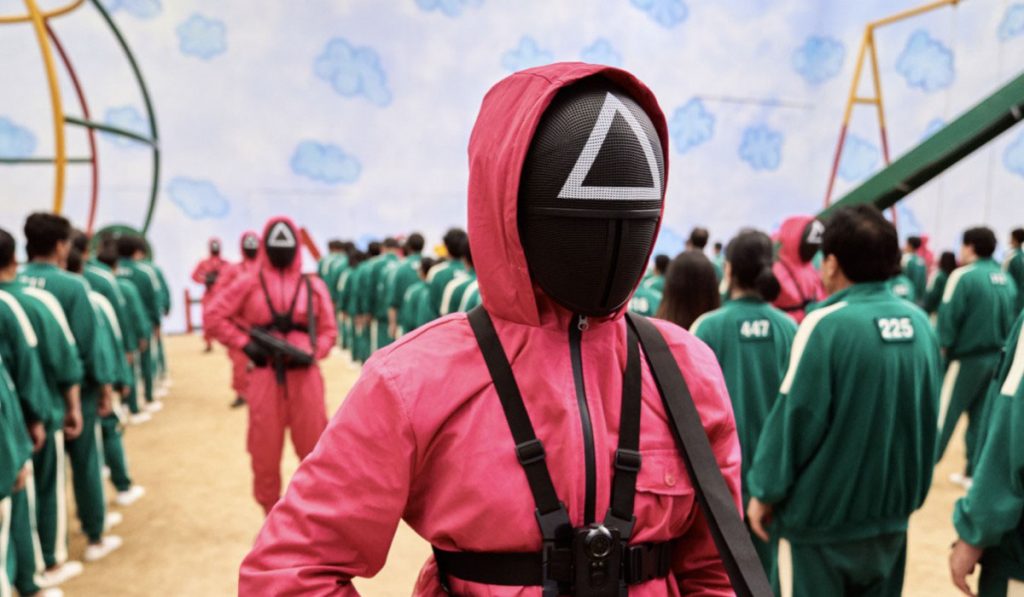 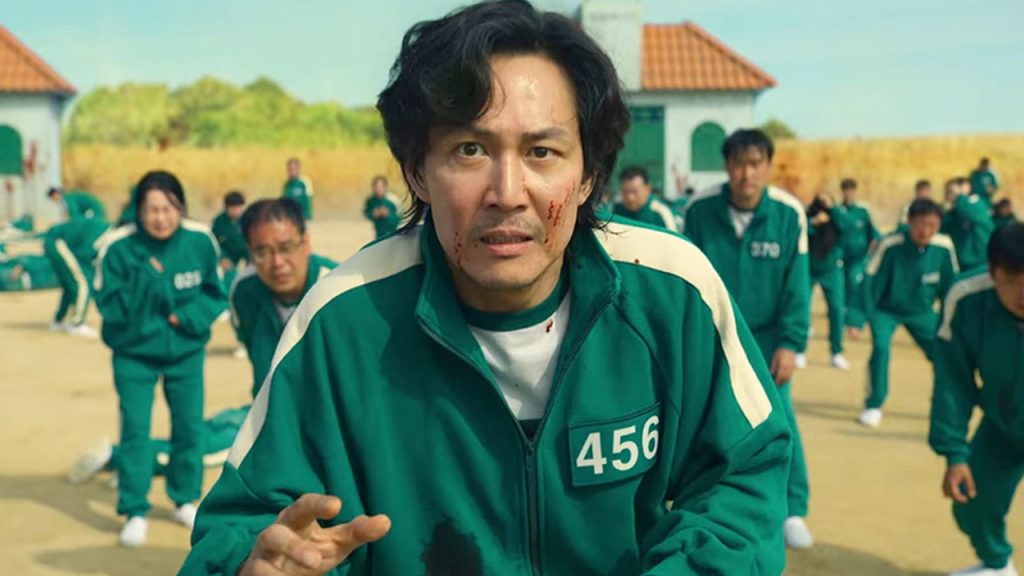 Is the Squid Game preferable to living outside it? Perhaps the only human solution could be a real awareness of what is happening around us.  This is not the Hunger Games. These are the games of spiritual devastation.  Knowledge provides the only true means of survival. Luck is just part of the game.

Pics from the web

View all posts by Elena →
This entry was posted on 27 November, 2021 in homepage and tagged David Erdos, Elena Caldera, Squid Game. Bookmark the permalink.