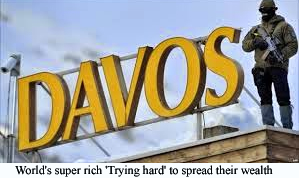 The 1%, who for the first time in history now own over half the global economy, are still experiencing unforeseeable problems spreading wealth to the world’s poor.Speaking in Davos at the World Economic Forum, otherwise known as the International Conference on Greed, New Interest, Tax & Oppression (INCOGNITO), an unnamed spokesman representing the shadowy 1% explained, ‘The poor must realise just how hard the 1% are trying to share their money. But its not as easy as it seems. We have paid ourselves billions trying to come up with the best way to spread our incredible wealth but unfortunately after years of constant meetings in our luxurious offices, onboard our personal jets and even our fabulous yachts we are still no nearer to a workable solution. This is due to a raft of unforeseeable problems. The poor have historically hard to locate as they are in a wheelie bin one night and sleeping under a bridge the next. Therefore having no proper postal address it makes it impossible to send them a cheque in the post. Undaunted by these complex logistical problems we even put a small ad in Tatler two years ago instructing the poor to send us their account numbers and sort codes but still zilch.”According to their spokespeople the world’s super rich they have been trying to share their incredible wealth with the poor since the invention of money. But as hard as they have tried something has always gone wrong and their plans have blown up in their faces with the wealth accidentally bouncing of the poor and coincidentally landing back in the bank account’s of the wealthy. Now some members of the poor are becoming suspicious about the real aims of the rich with some radicals even thinking that they are not trying to spread they wealth at all but relentlessly keeping it for themselves.The nameless and highly-paid spokesman for the similarly nameless and highly-paid 1% chuckled, “These conspiracy theories of greed are laughable. Ha, ha. It is merely a coincidence that we have all the money and they have none. Still it is important for us to quell these unsubstantiated rumours before we have to bomb someone. Therefore from today we are sending a new message to the poor. From now on we promise to double our efforts, our salaries and our bonuses, ensuring that the fabled ‘trickle down effect’ eventually begins. This will mean that instead of receiving the crumbs from the table the poor will, once and for all, be able to lick up the grease that trickles down the table legs.”

View all posts by Ethan →
This entry was posted on 19 February, 2015 in homepage and tagged Ethan Harrison, satire, spoof news. Bookmark the permalink.