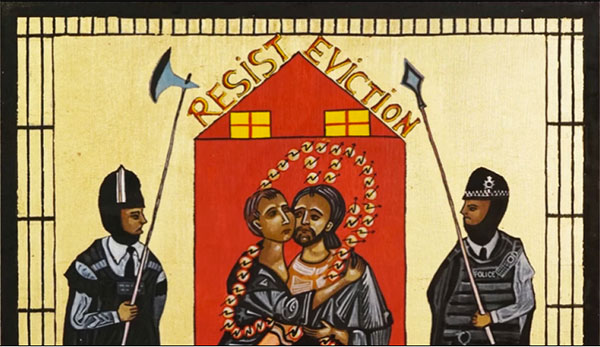 10 years ago the government criminalised squatting in residential property, taking away the ability to make use of empty property best designed for living.

This was done sneakily by adding it on to a bill already most of the way through parliament, and which was otherwise attacking legal aid and increasing punishments for the poor. Only the usual suspects objected.

Squatting has a long history in UK. Since the World Wars especially it has been a way for many people to house themselves affordably, but more importantly it was a part of a social movement over housing and space that used direct action (squatting, occupations, rent strikes etc.) the law and any other means to make housing fit for people rather than profit

By the end of the 1970s the movement seemed to have been successful, with people generally being able to house themselves through squatting, the increasing number of housing co-ops, council housing (including “hard to let” properties given to others when families refused them if they weren’t good enough, which was possible then), or could even afford to buy in those days. As well as housing, squatting had helped create spaces for artistic & political expression, parks, nurseries, food co-ops, social spaces with free entertainment and welcoming for women, queers, black people, etc. It wasn’t heaven, but things were going the right way and people were gaining the strength to fight for more.

When Thatcher came to power deliberately restored the domination of power and money, rather than human need, over housing and space. Starting with the sell-off (and underfunding) of council housing and the handing over of large areas of land to speculators and developers like London Docklands Development Corporation, they have got us back to a position where housing is primarily an investment and people come last.

In the last decades (whether under Tory or Labour rule) this approach has prevailed and private property & investment have been at the centre when shaping local policies on housing and urban space. It has translated into attacks on the alternative forms which people outside that logic and on low incomes find to house themselves. The criminalisation of travellers’ ways of living in the mid 90s or the recent restriction of boater’s mooring spaces in London are some examples. It has also been the perfect climate for models like guardianship companies to spring, by profiting both from owners who buy their “anti-squatting” service and from tenants who give up on rights out of need for slightly more affordable rents.

The ban on residential squatting was perhaps the biggest statement in such direction. It got supported by the speeding up of a trend already existing to make court & eviction processes cheaper and faster for the non criminalised squats, where free rein has been given increasingly to often violent cowboy security guards acting for bailiffs.

All of this hasn’t only affected squatters. Medium and low income renters from diverse backgrounds have over time been forced out of their communities to give way to gentrification processes in more and more neighbourhoods. Currently we are seeing massive increases in private rent in addition to the rising of all other costs of living that everyone is facing.

However, lots of people haven’t just been passive and miserable. Squatting in non-residential property is legal. Occupying residential property is legal if you’re there to protest rather than live there, or use it for social space etc. People have been making use of empty police stations, courts, offices, banks… Community centres, pubs, clubs, saunas … All sorts of interesting buildings! And have also held important protest occupations in housing estates, universities, etc. In the last decade, as well as in the 60s, otherwise empty buildings have become homes and also been used in diverse and creative ways, turning spaces into -often very joyful- expressions of defiance against a reality where money and power are to be in control of our existence.

Squatting still happens. Even if it does in a much smaller scale, it has a necessary role in the struggle and it is worth to rebuild our strength. People got together in the late 1960s to achieve that. Sure enough we face different challenges in different contexts, in relation to back then as well as in between our different situations and backgrounds. But housing precarity has an undeniable impact on the majority of people. Many of the renters who suffer it have also shown in recent years that they want to become stronger together (i.e. London Renters Union, Acorn, Housing Action for Southwark & Lambeth,…). Squatters have been side by side with tenants resisting their evictions, tenants have stood up in solidarity with squatters resisting theirs or when holding occupations.

The latest blow is the “Police, Crime, Sentencing & Courts Bill” that got passed this year, which further punishes travellers / people living in vehicles, plus a myriad other provisions that will restrict the way anyone behaves in the streets, including to show dissent. Loads of people opposed it in the lead up, through the huge amount of “Kill the Bill” initiatives and took it to the streets fiercely and fearless together.

Against the suffocation of our autonomous initiatives to fight squalor, which relies upon isolation between individuals, let’s remember that we are many and let’s act…

Reprinted from the website of the Advisory Service for Squatters, who offer legal & practical advice for squatters and other homeless people

Resources, handbook and links at Advisory Service for Squatters

Tweet
This entry was posted on 3 September, 2022 in homepage and tagged Advisory Service for Squatters. Bookmark the permalink.