What We Really Need to Know About Britain Alan Dearling conjures some words about this book

One senses that comedian-activist Mark Thomas and September Publishing realised that the Covid Time was The Right Time for this book. It’s a rant. A polemic. A Rage Against the Machine. It’s informative, challenging, frequently misleading and inaccurate (HMS Victory is in Plymouth, anyone?), thought-provoking, naughty, sometimes funny and humorous, and more than mildly irritating. I guess or suspect that many might say this about Mark Thomas. As is suggested in the blurb about him on the back-inside cover:

“Mark Thomas has been performing comedy for 35 years…He was a Guinness World Record holder for holding 20 protests in 24 hours…He has performed across the world including a squatted MP’s second home, on the roof of a multi-storey carpark, in the ring of a cattle market and outside a military base.”

Certainly, ‘agent provocateur’ seems an apt description. And such is this book. It is designed to annoy.

The Royals, The Windsors, come in for shit-loads of flak, as does anyone who is rich. This ‘History’ is about peasants (Us – the good guys) and Them (what he calls the ‘Rich Fuckers’ – mostly Slavers, apparently, with oodles of inherited wealth!). There’s an awful lot of info about the British Empire, its crimes, ‘stolen artefacts’, in some cases, stolen countries such as Gibraltar, the Falkland Islands and Chagos. Mark is not a fan of the British Museum and suggested to them that he should become one of its Trustees. His aim would be to hand back much of its nicked horde. And replace it with Rough music (a sort of permanent DiY Clap for Carers); Punk Rock and drill music; Marches – from the 1920s’ Hunger Marches, CND Ban the Bomb, the Miners’ Strike, the Iraq War demos; Fish and Chips – “Immigrant food…the first fish and chip shop was opened by a Jewish immigrant in 1860 in London”; Kindertransport: “…was the project that saw nearly 10,000 Jewish children evacuated from Nazi Germany come to live in the UK.” And Two Rooms for Ian Dury: “You can never have too many.”

It’s a book of short sections, ‘Mark Thomas-Bytes’, you could say, interspersed with quotes from the infamous and famous. For example:

“Who knows what hellish future lies ahead? Actually I do, I’ve seen the rehearsals.” Terry Wogan

This is a book that makes you smile, think, and get a bit hot and bothered. Both about the contents, the wrongs that we need to learn about, and also concerning the Thoughts of Mark Thomas. There is nothing about which Mark doesn’t have a view. He is always Right. He is Maddening in extremis.

As he suggests right at the outset:

“Never ever stop being shocked that Boris Johnson became Prime Minister. Do not be tempted to settle for acceptance. Acceptance is political methadone…We elected a man-child who has been sacked twice for lying. He can not even say publicly how many children he has spawned…He is a narcissist with a sideline in homophobia and racism, describing Muslim women as ‘letter-boxes’ and black people as having ‘watermelon smiles’…he has the moral principles of a hippo and the scruples of syphilis.” 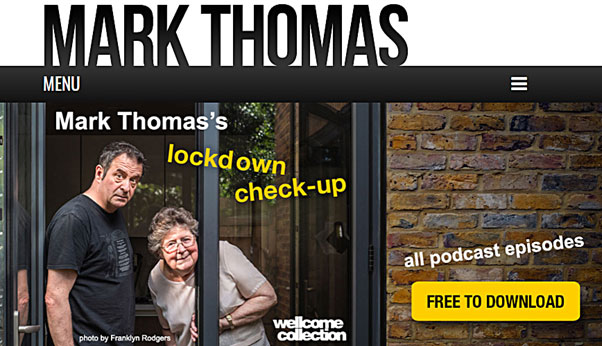 Tweet
This entry was posted on 8 May, 2021 in homepage and tagged Alan Dearling, Mark Thomas. Bookmark the permalink.

One Response to 50 Things About Us