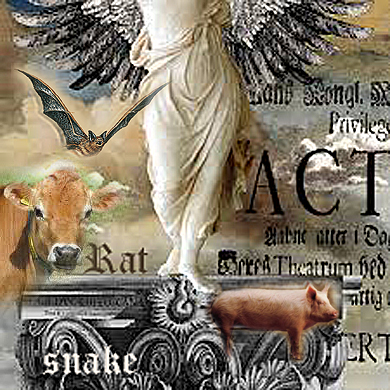 A “bitch” is a female dog;
Unless provoked, she is rarely nasty.
A “git” is a pregnant camel;
Traditionally, from the Arabic.
Squirrels and pigeons are not “vermin;”
Unlike the people who plague them.
Cattiness is a human trait.

Pigs are not “greedy;”
Nor are they the “swines” who cheat.
The cuckoo has nothing whatsoever to do,
With our sexual infidelities.
Sharks don’t deal in loans;
Or set scandalous interest rates.
Nor do rats betray, or tell on others.

Dogs are not “dirty;”
And badgers rarely hassle people.
If a vixen is “cunning,”
She is only using her intelligence,
To protect and care for her young;
A trait of all good mothers.
There is no “fishy business” here.

A turkey is not a failure,
And chickens are not cowards.
Faced with death, in hostile hands,
We would all tremble.
Mares are not especially “moody,”
Camels only sometimes “get the hump.”
If peacocks strut, they have plenty of imitators.

Bats are not mad,
Or even mildly eccentric.
Cows are far from “silly,” or “stupid!”
And asses are not “dumb;”
We are, for thinking them so.
The “monkey mind” is agile;
And very akin to our own.

“Bird brains” are not inconsiderable.
Their navigational abilities taught us to fly.
Nor are sheep mindless followers;
They have strong, visual memories,
Recognizing faces for up to two years.
Perhaps the fashion-obsessed,
Should take another look in the mirror.

If mules and oxen are “stubborn,”
It is because they oppose their enslavement.
Grouse rarely complain;
Though they have a lot to “grouse” about,
Persecuted as they are,
By the cruel and unsporting;
Who like making “pests” of themselves.

Vultures provide valuable service as scavengers.
They invented waste management, in truth.
A “slimey worm” works incredibly hard;
And deserves our recognition, not contempt.
Nor is the slug a “sluggard.”
Mice are far from “mousey;”
Though we’re sadly too ‘busy’ to notice.

Old foxes don’t deceive;
Nor do hens peck their husbands.
Gannets are not generally gluttonous;
That sort of “bull shit” is entirely man-made.
Giant lizards are not known for having violent tempers;
Unlike their hominid counterparts.
The so-called ‘higher’- so often turns out to be lower.

“Brutes” and “beastly” behaviour are far closer to home,
Than we like to imagine.
It is not the flounder who stumbles and falls.
With all our capacity for rapacious destruction,
For all our ancient boasting,
Homo sapiens sapiens is hardly the best example,
Of planetary wisdom.

The “devil” is not a horned goat,
A “Great Beast,” with cloven hooves,
Or a beguiling, “crafty” snake;
Evil has a familiar face.
It is no coincidence either that angels have wings;
That peace takes the form of a dove;
That Jesus was cast as a lamb.

Each one of us is an “animal!”
And it’s time we were proud of the fact.

One Response to A Monstrous Slander