Posted on 23 November, 2019 by Lawrence Freiesleben

“The function of the poet is to bring the shadow back into the light.” 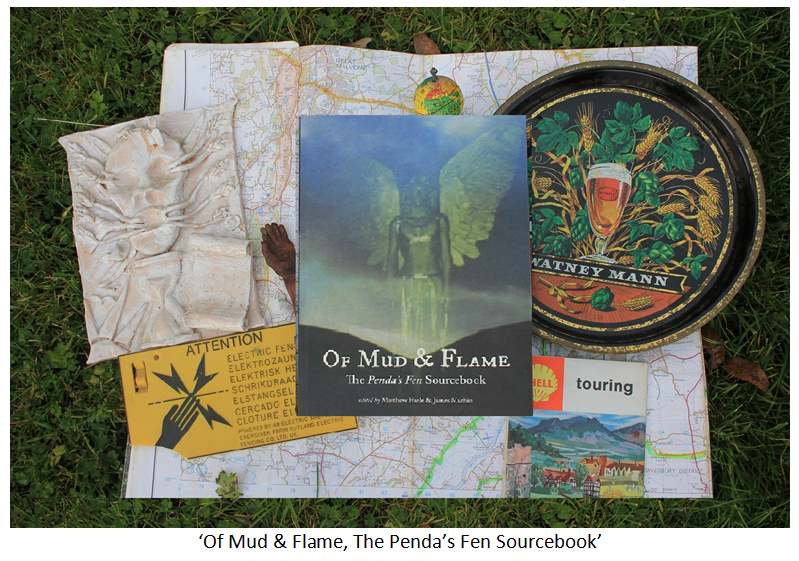 My mum used to say, that if you can’t say something nice, don’t say anything at all – not the ideal policy when faced with the torrent of raved-about books, novels, films and haloed prize-winners so obviously second-rate and forgettable that ‘honest’ reviewers would have to keep their mouths and hands sealed with duct tape. “A production line we’re stuffing with trash,” Arne, the writer in Penda’s Fen, might comment on much of this contemporary output.

What a pleasure then to discover that ‘Of Mud & Flame, The Penda’s Fen Sourcebook’ like all the best books and like Penda’s Fen itself[i], is about so much more than one might hope.

Illustrated with black and white screen captures (and in Carl Phelpstead’s, Penda’s Mercia, some fascinatingly inconsequential photos by Ben Phelpstead[ii]), this book of highly varied essays is a treasure trove. Exploring all manner of themes, amongst other things, the book reveals just how prescient the film was, and how valid it remains forty-five years later. Consider in the light of neo-liberalism and climate emergency these thoughts from author of Penda’s Fen, David Rudkin:

“I think capitalism will fail as a relationship of violational exploitation between man and the planet, though I don’t know how long this will take or what catastrophes its collapse will encompass. For all that it is a terribly convincing lie, it is comfortingly anti-paradoxical in its profession to have defined, colonised and expunged all contradictions: it demands that people part company with their shadows, whereas I think the function of the poet is to bring the shadow back into the light.”

In these days of slick, yet generally vacuous TV drama, high-production-value style over content, it was a relief that Rudkin himself in the foreword, contemplates that “Penda’s Fen, might look – particularly in some technical respects – rather creaky now.” I was worried, watching the film again, that I’d have to be respectfully defensive. As it turned out, it was far more powerful and complex than I remembered. Provided you’re aware of all the ideas and atmospheres behind, most of the ‘dream sequences’ required little suspension of disbelief, though it helps to have a propensity for old films and television. Weird and intense next to the blandness of most T.V. today, despite an occasionally theatrical over-emphasis and the limited budget, only a few moments were faintly risible. For me the greatest external distraction – as so often – is seeing the beauty and quietness of the countryside at the time of my own childhood: its leisurely, thoughtful pace.

As with the film, so the texture of the book is equally complex and wide-ranging, with fascinating by-ways featuring Elgar (John Harle), places and names (Beth Whalley), history (Tom White), and even the films of Carl Theodore Dreyer (Craig Wallace). Interviews and reminiscences provide interludes. Only a few of the essays would benefit from a specialist’s prior knowledge: many of the books and plays mentioned are less familiar to me than the film connexions. Some of these, such as Witchfinder General (1968) The Blood on Satan’s Claw (1971) or The Wicker Man (1973) are central to the loosely defined ‘Folk Horror’ genre which arises in Adam Scovell’s piece – with its powerful closing paragraph decrying the recent upsurge in popularity of “toxic notions of Englishness”.

I was particularly glad to encounter Raymond Williams in Raymond’s Fen, Joseph Brooker’s perhaps most dissenting essay – which rightfully disparages the elitism inherent in the idea of the main character in Penda’s Fen, Stephen Franklin, being chosen and blessed by a king. Brooker describes the “entire scenario” as “extraordinarily radical” and yet “at the same time unimaginatively conservative”. While I take his point, it’s also not difficult to see these closing sequences as Stephen’s own subjective consoling vision – a temporary respite or reward for his traumatic upheavals . . . which doesn’t mean I assume the supernatural aspects to be entirely psychological.

Dissent arises again in Carolyne Larrington’s Stephen and the Women, and its careful endnotes, as she asks whether Stephen’s final claim to be “both woman and man” stands up to critical scrutiny. What appears to worry Rudkin more, is the inevitably dated nature of his television play’s conception of Englishness – yet this too could be a useful question to struggle with in the quest to become individuated. Only the unpurged projection of Stephen’s Franklin’s original personality, could be as dated and reactionary as the U.K.’s current reversal towards racism and Brexit. Patriotism is still the last refuge of the scoundrel, though unquestioning rationalism – missing the wood for the trees – is not far behind . . . somehow, we can’t help following its burnt trail.

I enjoyed the idea of the BBC’s Pebble Mill studios in Birmingham – where producer David Rose, introduced Alan Clarke to David Rudkin for their collaboration on Penda’s Fen – as a hub of dissident voices in opposition to “the Death Star of the metropolitan centre,” as Roger Luckhurst, phrases it[iii].

Gary Budden describes Penda’s Fen as a “Gnostic anarcho-punk anti-pastoral work of English art that questions the very notion of Englishness”, and while I wouldn’t agree that it’s anti-pastoral, the most energising thing about Of Mud and Flame, is the variety and clash of the viewpoints and their digressive nature. Like a nation itself, it heaves with contradictions and dissonances. But unlike the England of 2019 – about which the writer Arne in Penda’s Fen might say: “We’re not people any more with eyes to see” – the book has access to a worthwhile common goal and a refusal to accept our encroaching blindness. So far, I feel I’ve only begun to travel its surface.

[iii] More on this background story emerges as an extra film on the dvd/blu-ray of Penda’s Fen available through the BFI at https://shop.bfi.org.uk/penda-s-fen-ltd-edition-blu-ray.html#.XdZ-2fn7QdU

View all posts by →
This entry was posted on 23 November, 2019 in homepage and tagged Lawrence Freiesleben. Bookmark the permalink.

One Response to A Penda’s Fen Treasure Trove