A Review of Simon Collings book. 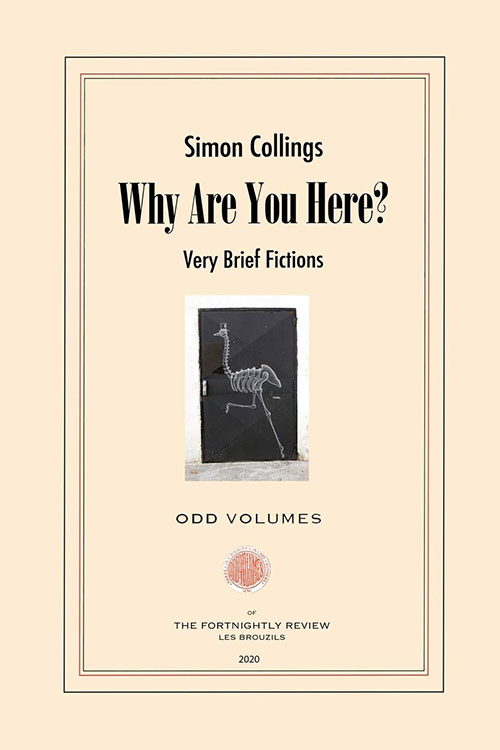 Why Are You Here? Very Brief Fictions – Simon Collings (Odd Volumes of The Fortnightly Review)

‘Given the nature of the ‘book’ any attempt to summarise it is impossible.’ Medusa

Before Covid, and certainly during, I have taken some comfort from literature that I scorned in my more self-assured youth: books filed under the Self-Help category. Why Are You Here? strikes me as a title that would sit nicely alongside The Power Of Now. It asks the ultimate question and provides the cover image of an ostrich skeleton to perhaps illustrate some kind of answer. The frontispiece quote from a Kafka letter states ‘Naturally things cannot in reality fit together the way the evidence does in my letter; life is more than a Chinese puzzle.’ With this in mind, I began to approach the prose poems within as exhibits or evidence in the puzzling case as to why I am here.

The opener, You Had A Suitcase blends specifics with uncertainty where the narrator tries to piece together memories of an unnamed other in a morphing location. There are plenty of objects to go along with the suitcase but nothing can be taken for granted. The narrator is wonderfully unreliable, too – giving common objects such as a bed and a mop comic potential. Best of all, among the concrete details and the memory lapses, there is a vegetable patch at the end of the room – a delightful, surreal twist. The piece concludes with ‘At dawn I returned to look for you. The station had been remodelled, but the information kiosk hadn’t moved, and the blind was still down.’ Here, the ordinary is juxtaposed with the strange and the word remodelled is perhaps key with further associations with ‘model’, suggesting the Hornby sets of yore. The planners and makers are shifting the context around and we are invited to make what sense of it we can, knowing, that this project is a mirage as the certainty we might seek can never be realised.

It is hard not to think about Covid when reading this collection – ‘The beetles infesting the bathroom were multiplying.’ The origin of this infestation cannot be identified but might be attributed to a mysterious electrical device located in the hall. The Kafka like transformation of the room cannot, despite the efforts of the occupants, be halted. Doors and windows are sealed. Close to midnight, Imogen said, ‘I never thought it would be like this’, and started to cry. A feeling that, perhaps, many of us can relate to right now.

After this somewhat sombre beginning, the collection shifts and swiftly moves into the wonderfully comic. Synchronicity pushes the logic of coincidence as far as it can go. Unlikely events and numbers click into place and then we are offered the first of the beautifully described and randomly numbered objects (the first one is number 43, which causes the narrator to reach for his shotgun). The numbering system reminds this reader of The Beatles and Revolution No.9 for some reason. These objects, peculiar and surreal, are exquisitely described. Object 135 has a description, that in tone, perhaps fits the genre of an auction catalogue – ‘It is unusual to find the leather case so well preserved.’ The contents of the case are graphically described – four balls nestling in velvet lined pockets, ‘each sphere marked with a delicate black line which divides the surface into hemispheres, each hemisphere inscribed with a line of indecipherable script..’ To go with these spheres, there is a ‘slender, tapering baton fashioned from wood of a yew, a silver ferule fitted to the narrower end…’ In the end, we are informed, ‘Along the bottom of the case are the seven indentations where the missing charm figures should be.’ Whatever this object may be, I would love to have one.

It doesn’t take long to start laughing out loud when reading this odd volume. On The Tourist Trail creates a Pythonesque scenario where a Chinese mini-TV series adapts a novel concerning, of all things, ‘an accident-prone professor.’ It’s hilarious, as is Illegible which is, perhaps, a stand out piece because it is so funny. Line after line is a gem, ‘As soon as the coast was clear we began writing up our notes. In the pitch dark this was harder than I expected..’ The dry humour is balanced with a strange logic and between this tension, the lines light up. In turns, funny, strangely familiar and disorientating. Something’s happening here, but you don’t know what it is, do you, Mr Jones?

There are some fine shaggy dog stories. Verne’s Nemesis tempts the reader to cross-reference the facts – they might be there, and then comes the swift suspicion that the whole thing is a brilliant wind up. The same process occurs in Theory, the academic tone seems credible, replete with a footnote. Fact and fiction concerning Wordsworth and Milton are blended to the point where, indeed, the world is turned upside down.

Orang-utan flips the whole viewer/voyeur notion on its head with hilarious results and the absurd experiences endured in every day life are further explored in Don’t Give Up. It is interesting to contrast these tales with Natural Remedy which describes what might have seemed like a surreal encounter before Covid. The same matter of fact exploration of the strange occurs in Marigolds, a bizarre scenario that seems no less peculiar than the less fictitious circumstances of Natural Remedy.

Destiny beautifully employs colour to describe ‘the scene with the blackbird’, contrasting the colour of the beak with a bouquet of fading tulips and ‘the echo between the colours’, observed by a woman who wonders: is destiny ‘waiting for the right moment to introduce itself?’ Question 7 which immediately follows presents a series of open-ended choices where one decision is, perhaps, as reasonable and inexplicable as another. In Family History, projections become reality, the blurring of the boundaries between intention and manifestation.

Rather like the quote above from Medusa, Why Are We Here? is ‘multi-dimensional’. A fun house where mirrors reveal much more than we bargained for and achingly funny and brilliant narrative hooks lead into inter-connected compartments where all is strange and at the same time, familiar. Where stairs in night clubs descend to the desert and extraordinary animals such as Alice the badger and Libby, a ‘despondent’ lobster become companions and an orang-utan who is implicated in a murder mystery. Sometimes, a musical refrain will drift in from one story to another.

The great charm of this collection is that the odd scenarios are often described by a steady, logical and endearingly hapless narrator caught up in increasingly bewildering situations. Imagine, for example, trying to blend in with a busy crowd when you’re stark naked.

Another gem, Hermit Wanted is written in the style of a job advert, interrupted with comments by the reader who concludes that the job ‘sounds perfect’, and, indeed, it does!

This is a glorious collection and goes some way, indeed, as to providing clues as to why we are here.

Tweet
Tweet
This entry was posted on 6 March, 2021 in homepage and tagged Jonathan Chant, Odd Volumes of The Fortnightly Review, Simon Collings, Why Are You Here? Very Brief Fictions. Bookmark the permalink.