Aleppo is defended by Assad, not attacked

WAR – what is it good for? The military and weapons industry, of course. That’s what they do. When you have trained to become a chef, architect or musician your natural desire is to have people who want feeding, housing or entertaining. Soldiers are no different. Without wars there is no place to properly test new weapons and the skills of those who are trained to kill people. War is where soldiers get promoted through the ranks. They like it, as do the makers of death-dealing weaponry. So when the military industrial complex has its hands on the controls of a nation we can be horrified, but not surprised, that reasons to make war are fabricated. We don’t want to believe that fellow human beings could behave like this simply to get rich and powerful, but they can, and have done through history. Hundreds of thousands may die and millions be displaced by their crimes against humanity. They don’t care.

The war in Syria was planned long before any shots were fired. It is as phony as the WMD lies that initiated war upon Iraq, and as unrelated to “bringing democracy” as the war that turned a stable Libya into a mess for its people, a training ground for terrorists and a launch point for thousands of refugees fleeing the chaos we brought to the region. The Syrian conflict is NOT a civil war, but a foreign invasion, supported and led by the US, Saudi Arabia, Israel, Qatar and other interested parties.

Most of the news we are fed about Aleppo is lies. Did you know that 70% of its residents supported the Syrian government, according to a rebel commander in 2012? 600,000 residents fled eastern Aleppo to the safety of government secured western Aleppo when the so-called rebels (mostly foreign fighters) attacked in July 2012. The estimated 200,000 trapped in the east today are prevented by the insurgents from fleeing to safety. It is these so-called rebels who turned once-peaceful eastern Aleppo into a war zone, which is why civilians are getting killed. TheWhite Helmets are not what you imagine, either. The so-called Rebels are good at PR, trained by their Western advisors.

We are barraged with talk of nasty “barrel bombs.” These explosives dropped from the air are, essentially, bombs not made by the likes of  Lockheed, Boeing and BAE Systems. All bombs tend to kill or injure those in a building being destroyed. Respectable branded bombs can cost anything from $100,000 (Hellfire) to $14 million (the MOAB) apiece (average cost of a US airstrike is $2.5 million ). To those at the receiving end, many of the branded products can be even more horrific than barrel bombs.

“Top U.S. arms makers are straining to meet surging demand” for their lethal ordnance as a result of the various conflicts supported or prompted by western foreign policy in Syria and the Middle East. Its boom time and they’re lovin’ it. The Syrian conflict could have been over in 2013 had the US and its coalition not actively fanned the flames of war with men and munitions. It is all done for the Syrian people, of course.  Today they are still fanning those flames, seeking to escalate and prolong the conflict.

The western military industrial complex doesn’t really give a damn whether wars are won or lost anymore. When the US lost in Vietnam and abandoned mission in Iraq its generals did not surrender their swords and America was not invaded. Syria is or was a big stepping stone on the road to bringing down Iran. It was all planned ahead and paid for with our taxes.

It was the US that scuppered the recent cease-fire in its desperation to keep the conflict going. They spin their propaganda, demonizing Assad to justify military intervention. The ploy is to protect the Syrian people from his tyranny (ring any bells?). The aim is to prevent him defeating the so-called rebels intent upon taking over Aleppo against the wishes of its residents. That could bring peace – a major setback for Islamic State and the military industrial complex, putting a brake on America’s grand demolition plan for the Middle East.

This highly recommended interview clearly explains the situation in Syria. 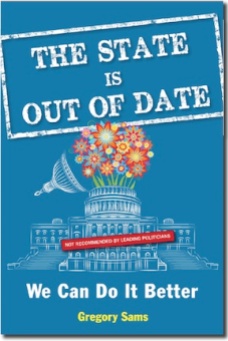 This book explores the alternative. It is possible for us to live in peace without slaughtering each other in its pursuit.

Like Loading...
This entry was posted on 6 October, 2016 in homepage and tagged Aleppo, Assad, Gregory Sams. Bookmark the permalink.