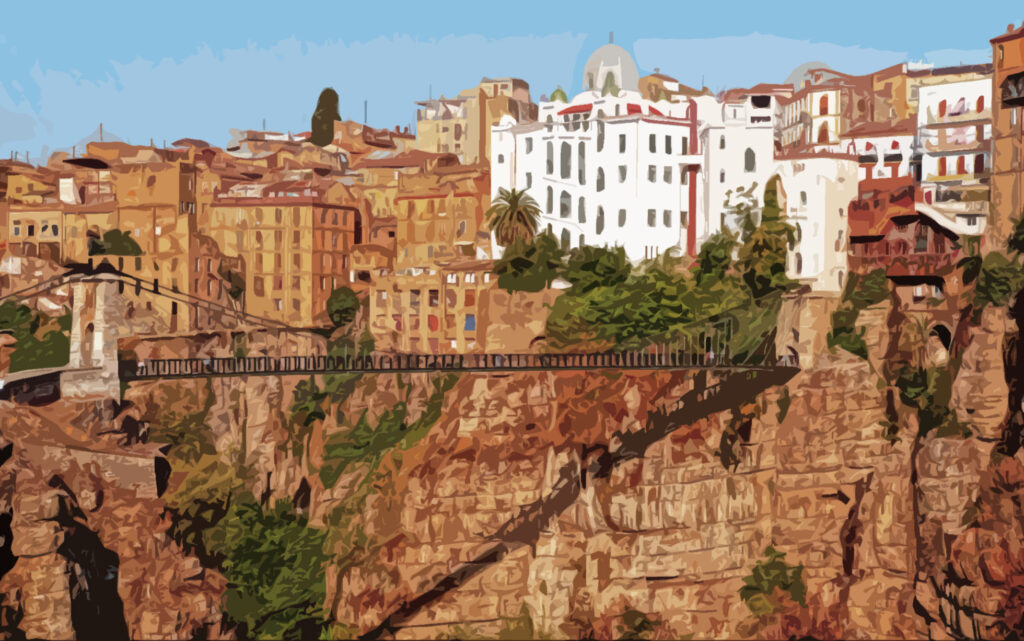 Troops pass through the city and get lost in the desert. Algiers is on fire; there are scorching winds and sandstorms. The desert is evidently mad! Everything is bright red and howling, but the philosophers have their boots on and are sorting something out. I write about the war from a cool bath, perhaps the only Frenchman who still uses eau de toilette in the evening. Sometimes the water changes colour; I’ve had rose water, rainbow water, piss water. The colour of the water reflects the changing fortunes of a war which will inevitably be turned into a musical when the rebels take the city; a psychedelic musical, with Berber drums, if the Sufis have their way. There is a heap of sand in my hair, and Ingrid Bergman still wants to kiss me, but she’s in the wrong movie, the wrong country, and often confuses Humphrey Bogart with Albert Camus. Not that I’m either. The Sufis want me to write about the war from a cosmic perspective; but I can only write from the perspective of cigarettes. I cough – is it the sand or the cigs? Who knows? – but the soldiers bring back a carton of unfiltered Camels from the desert. That’s about as cosmic as it gets for me.

The smokes are refreshing but my lungs are clogged with sand. I offer a Camel to the Sheikh, a sun of the desert, a sun around whose radiance the Sufis orbit. Right now they’re practicing a victory zikr around him, while he scouts the kitchen for an ashtray. He inhales the cigarette and all of France trembles; it rains on the Champs-Élysées. Suddenly, the Sheikh inflates like a shiny, red balloon, rises above the Bedouin tents and minarets, then hovers over colonial government buildings until he’s spotted by French anti-aircraft artillery. They take a few pot shots at him, but totally miss, despite his ursine belly; an easy target, you’d think. Fortunately, a little boy appears in woolly socks, pulls out a blow pipe and shoots a dart right into the heart of the floating Sheikh, who pops loudly, and drops as rainbow water all over the burning city. Meanwhile, back in France, the Seine bursts its banks and carries off the Eiffel Tower as a gift for Grace Kelly. De Gaulle can do nothing but ask for her advice. She totally hates Ingrid Bergman.

Now the esteemed Academy Award winning actresses are boxing for Euros in the desert. The winner will determine the outcome of the Algerian War. I’m trying to write a blow-by-blow account of the fight for Le Monde, but keep getting distracted by wandering legionnaires, who shimmer in and out like mystic camel trains carrying rubies, spice, and unfiltered cigarettes. Ingrid’s trainer thinks she can finish Grace in the twelfth, which is entirely possible, given the size of her hands, and Grace’s notorious glass jaw. To be honest, though, I’m no longer interested in the outcome; I’ve discovered a caché of eau de parfum in an ancient city, under centuries of sand, a treasure which will give General de Gaulle unlimited power, and win me the Legion of Honour, if I can unite the Sufis and French Foreign Legion in an unholy aromatic entente.

Tweet
Tweet
This entry was posted on 3 December, 2022 in homepage and tagged Stephen Nelson. Bookmark the permalink.