All That The Heart May Provide

A response to recital one in STRING FEST 2017, an ongoing series,

And the santoor, its soul chiming across the flesh and bones

Is the voice of the heart, as it’s leaving

The static realm for another,

Distant to all words can save.

The instrument binds the inner call

The music softens the heart, turning the blood to dreamt rivers

Stitching those in attendance into one cojoined seam.

A poetic response is I hope a fitting one to this, the first concert in a new series of recitals and performances arranged by Jay Visvadiva of Sama Arts and Anjan Saha and Dr Frances Shepherd of PRSSV, reknowned promoters of Indian music and its teaching, whose organisations both celebrate the master players  of Indian String instrumentation. By eschewing the larger concert halls and the preponderance of obvious commericialism, the String Fest 2017 project is about uniting and sharing the higher realms and practises of this music to new and established audiences. With regular appearances all over London, from The Nehru Centre in Mayfair, to the Dominion Centre in Southall, along with other venues like Rahmat Simab’s The Music Room in Preston Road, here is a chance to discover essential musical forces and experiences in settings intimate enough to lead to a profound sense of appreciation.

The recital although recorded was one undertaken without amplification, allowing the audience to come into contact with ‘a natural and organic sound’ as Jay Visvadiva described it,  a rare thing when one stops to consider the style and inappropriate bombast of modern concert going and providing a sense of both purety and privilige for the audience who were able to see such artistry close up and at first hand, in all senses of the world.

Around this precious wood, is a spell,

His hands stroke the strings as the other

The sound is seduced and encouraged

As if suddenly bursting forth from a well.

The Sarangi is a vertically held instrument, somewhere between a dulcimer and wide guitar neck or Chapman Stick which is bowed at its base. It produces  a personal orchestra of sound,a legitimate voice that speaks of other rooms and forgotten places, delivering and returning audiences to another time in which the heart’s unsaid questions are answered. On listening one is transported, as this is a particular indian air and I was struck on watching and listening how  Surgeet Singh holds this small rectangular cello like instrument like a baby whose soothing resonance he enables. Although based in London for the last 17 years Surgeet Singh has travelled and played all over the world as teacher and musician throughout his long and distinguished career. His work builds on that of his own master, Pandit Ram Narayan-ji, who was the first sarangi player to establish the instrument as solo vehicle for expression, away from its accepted place in the ensemble and  orchestra. These innovations started in the 1940’s, and while one can appreciate the unique texture and  aural colour that the sarangi supplies to group playing, its function and role seem to me to represent or capture a sense of spiritual beauty like no other.

As the bow slides across strings, a lover’s touch invokes wanting,

A sweet melancholy as we try to satisfy a whole life.

The sarangi sings in a wound which the master heals

With his playing; as he improvises across ragas,

We move from the world we know now

Into his, and into the world he was part of,

As music restores and romances

To more than he knows or desires,

We rarely transcend in the west. Recent events show that clearly, and to my way of thinking the aims of this festival among many others I’m sure, is to show how eastern music provides the sense of  spiritual necessity we are currently lacking. Solo recitals like this are unique opportunities. They reveal that these players allow their chosen vessels to become keys, unlocking the barriers of ignorance and incomprehension. They encourage us to move around and beyond our accepted experiences, to refocus on what is important to us not even in the general sense, but in the given moment; the place where we find the true means and methods of reformation.

The solo instrument is featured across the festival but each indian perfomance will feature Tabla, for rhythmic and even harmonic assistance. After the rehearsed Tabla player fell ill, Tarsim Singh ably replaced him on the day and his resourcefulness and sensitivity to the given sound was remarkable. One of the many benefits of Asian and Indian communities is that they are just that;they have galleries, libraries, orchestras of people and players to call on, who, separate to the western understudy or substitute, understand the work on a primal level. A western artist requires all manner of preparation, from the classical musician’s score, the actor’s text or avoidance of cliché, to the jazzer’s experience or repertoire of approaches. One of the pleasures witnessing these players is to show how quickly their sense of communion arrives.

As his fingers search through caressing

For the proper ramifications of light.

For this searching; in the cream coloured room

Of Dominion, there is a powerful search across white.

Music as milk, making the fresh from responses,

As the audience, fed like babies, are slowly reborn

On one night.  People receive through these sounds

Their own sense of fulfilment, nourished no doubt

In places like this and on occasions like this, those scared by life can reaffirm all that’s sacred. The act of listening and attendance is contribution enough for the effort made by musicians

Is to loosen the frequent need lost within.

Reintroduce those who pass by so that the deepest involvement can win.

Surgeet Singh’s private soul was conjured before us.

As his hands prayed , he persuaded

And taught each enraptured heart how to sing. 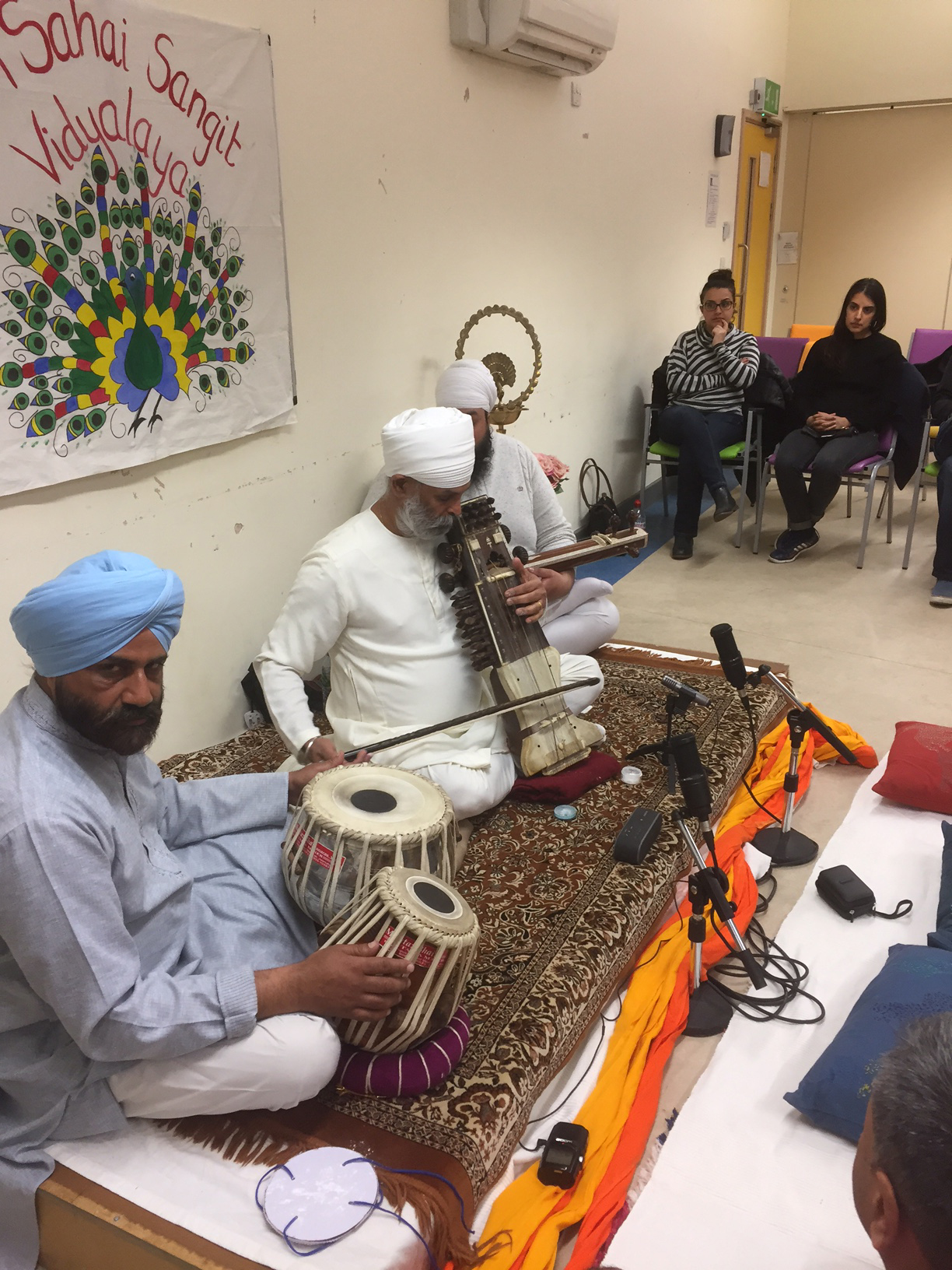 Playing his second instrument, the Dilruba, there is an earthier sound

To his strings. Not as spiritual, this; Something more from the rock

And foundation, as if the human heart through sarangi has been

Accompanied by the skin.  He plays ragas with force,

Sawing with skill across silence, grounding the room with dark flavours,

Recolouring cream with a tinge

As we move into another sound just as sacred,

But with one who speaks without yearning of the suffering song

Pain begins. The audience become snared by this particular power.

Tarsim Singh calls the time, as he is instructed while playing,

On which shape and pattern the raga’s affect manages.

This trio of Singh’s have sung their own magic; a spectacular invocation,

In a suburban room in Southall, the soul’s company is created.

Restore the fallen ones back to health.

Concerts of this sort are often food for the spirit.

It seems to me that this String Fest is one to wear with pride and  warm all.

Step away from your world to rediscover new choices.

There are other sounds to command us.

New voices, too. Hear their call.