Posted on 1 August, 2018 by Jan Herman
Sinclair Beiles (1930-2000)
.
Gerard Bellaart writes that after the South African poet Sinclair Beiles died, in 2000, “a wealthy collector who owns the largest holding of Sinclair’s manuscripts visited me” — this was in 2008 — “and assured me that he would sort out a proper gravesite. Seeing the grave now in the condition it is in makes my blood boil. I am grateful Gary is there.” Gary Cummiskey, who with Bellaart has done more than anyone to memorialize Beiles, writes: “Sinclair’s grave continues to be unmarked. There is no headstone. The one you see in the photo [below] belongs to another grave. When I was there last time I was told there was an in-cemetery service for about 500 rand a year, and they would ensure that the grave is kept neat and free of weeds. I will enquire if the service is still available. Then I will pay for the service and make sure that they are keeping their end of the bargain.” 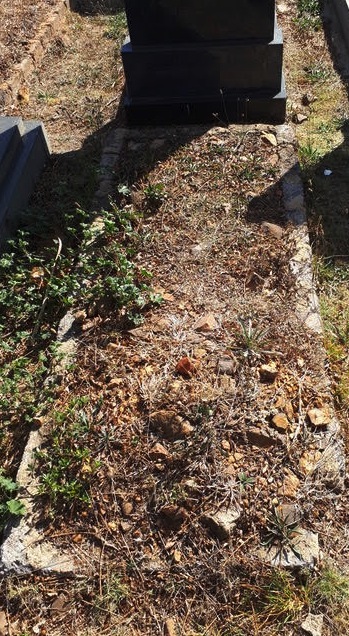 .
.
INFERNAL
For Sinclair Beiles
.
The tyranny of rhyme–
the shivering branch,
the perishing flower–
makes everything a crime.
Cops and finks who comb
their hair with signatures
let us know–don’t laugh–
that integrity and sincerity
are not the same.
This unmarked plot of earth
is primeval and infernal–but
we who are as temporary
as plants that fail to flourish
shall forever give it birth.–
.
JH

Beiles at his best was an incandescent poet.
How else to describe the author of these lines:
there is a way of committing suicide
called poetry
there is a way of taking a knife
and carving from the infinite nothingness of the sky
a solitary cell
in which one spends a lifetime pacing about
occasionally shouting messages
through the barred cell window
at different passers by.
there is a way of trying to create a universe
with all its constellations
from the view of people scurrying by
in the rain with their umbrellas up,
a way of ruling a nation of shadows.
there is a way of imagining
one possesses all the secrets of the soul
and this gift will provide one with freedom,
a way of imagining all the sights
not yet photographed by the travel agencies
there is a way of believing
one has special dreams …
.
.

Bellaart writes further: “As you know, I consider Sinclair the father of cut-up. He certainly considered himself one of the fathers. And that was not just Sinclair’s occasional spell of madness making the claim. His name is still absent from the Beat Hotel plaque“.

View all posts by Jan →
This entry was posted on 1 August, 2018 in homepage and tagged Jan Herman, Sinclair Beiles. Bookmark the permalink.

One Response to An Incandescent Poet in His Solitary Cell