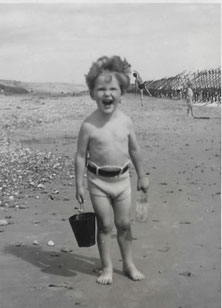 My sister has found an old photograph
Of me holding a bucket and spade
On a beach fringed by coastal defences.
I’m roaring with laughter. Unafraid.

The year is 1945, but I’m totally unaware
Of the war or of thoughts of invasion.
I know only paddling, the wind in my hair
And my mother with her odd contraption –

It’s a Box Brownie for which she asks you to smile,
For a creature within who is miserable –
She invents nonsense names for this goblin inside
Then asks you to dance for its approval.

I try glimpsing its presence through the lens;
I try to see into the dark of the box.
She smiles, I smile. She clicks then I run off.
I run away to play on the rocks.

My father is absent; my mother’s all mine,
A three-and-a-half year old boy.
A tiny body with a hand-knitted bathing suit.
As I look now I’m stunned by the joy.

In the distance there’s a man on the horizon
Leaping up as he stretches for a ball.
Icarus has been flying too close to the sun:
Fifty million bodies have taken a fall.

London’s every other block has bomb-damage;
My home looks like what’s left of Baghdad –
But to a child the city’s bombsites are playgrounds.
It’s play-power that this photo brings back.

View all posts by Heathcote →
This entry was posted on 20 October, 2016 in homepage and tagged 1945, box brownie, Heathcote Williams. Bookmark the permalink.

2 Responses to An Old Photograph, dated 1945