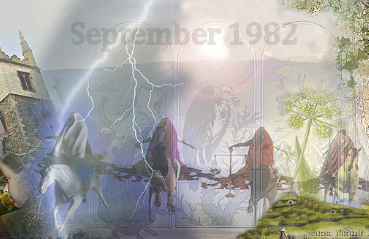 Junko was in the kitchen preparing dinner and what would be his father’s late and meager supper and Abu Keiko was in uniform. He was sipping a Pepsi. He was on a twelve-hour shift tonight. Joseph had come around for dinner and sat in the fourth and empty chair at the dinner table. There were four more stained white polycarbonate seats for guests, rarely used now, and kept down in the basement closet with the weapons and the old mortar. In the closet there too were three AK47s and a thousand rounds of ammunition in crusty boxes, their labels flaking like pastry. All that was left from his arsenal—there was a time before Leon was born when Abu Keiko sold an AK a month to feed his wife and young daughter. In the basement shelter too were couches and a day bed, covered in dust sheets, old whisky bottles from before Abu Keiko gave up drinking, and there were Christmas lights and candles.

At the table Leon sipped a glass of water and unfolded and refolded a damask napkin. Joseph always became quiet and measured and smiling when Abu Keiko held forth. They all knew the old man was getting his energy up for a long cold night out in the open, so they let him talk; hold forth. Joseph studied the table cloth, smiled at Abu Keiko occasionally, smiled at Leon and studied the table cloth again. Dinner was breakfast: hummus and olives and bread, augmented just a touch with sardines in oil and coriander.

“Most of these trouble makers are just children,” Abu Keiko said. “They use the children for the silly business.”

“Teenagers should get second chances. Men can only buy them. Leon,” he turned to his son, “if you only knew, before—people were happy! People smiling. Now no one laughs, no one smiles.”

“It is hard to smile when you’re bashing yourself in the head,” said Joseph.

“Hezbollah are for the people and I love them, but they are too frisky.”

Joseph was looking at Leon too. “I saw your son today,” he said. Leon looked up. Joseph was talking to his father but he was looking straight at him. “He was walking Place Sassine with a big Spinneys bag full of shopping and a long sad face.”

“You looked like an actor who had lost his movie.”

Leon felt a momentary high panic. “No I … that wasn’t me.”

“The government is a genie. Poof.” Abu Keiko made an exploding-hand shape. “A genie.” He had turned in his seat and was addressing them all via Junko in the kitchen. “Where are their whispers and pale faces now? And these people whose houses we guard—this Kuwaiti with his Sri Lankan maids—they rape them, you know that?”

Junko came in arms full of plates of food.

“Abu Keiko,” she said, “not at the table with your brother and your son.” She began to lay the plates, frowning.

“Yes, they hold their passports, they rape them, they pay them a pittance. One of these Kuwaitis has three dogs. One of these dogs costs one thousand dollars a month for food and doctors. Not people. Dogs.”

“Here in my heart is love,” he said warmly and touched his chest and beamed around the table.

“Junko,” said Joseph, “this is too generous.”

In the kitchen door Junko turned and stood at a strange angle, and met eyes with Leon. She looked hurt by the compliment, and said just, “No, it’s all we have.” She went back into the kitchen. Joseph and Abu Keiko began to tear the bread. Leon moved some food to his plate, but his stomach felt vague and uneasy, and he sipped more water. He felt an urge to check his phone for messages, or to send a message to Etienne, or Bashir, as if they were businessmen, partners. He felt better when he knew he would not.

“One thousand dollars,” reiterated Abu Keiko to his brother, who shook his head.

“A man needs a hammock in the annex with a view of the sea. This is what an old man needs.”

“Mmm.” Joseph looked up into midair and began to softly sing. “I swear on my soul, to Sri Lanka I will go. From Sri Lanka I won’t return, unless I kill or die.“

“A hammock in the annex with a view of the sea.”

“When will the election happen do we think,” Joseph said.

“Politics in this country is one long and very dangerous soap opera full of lies and repetitions and clichés. Every episode’s climax leads to no resolution. We are in season fifty-eight at least, and few of the original cast remain. Apart from those grizzled old men—like me—who are typecast and cannot get another job.”

Joseph snorted derisively—Leon could see him trying to steer Abu Keiko away from somewhere maudlin. “Who would employ an old liability like you?”

“Of course, indeed,” said Abu Keiko, pleased, and serenely scooped hummus with a cone of rolled bread. “Junko, ma belle.” She came out with a small bowl of salad and sat down and smiled at Leon. “Ma chère,” said Abu Keiko. “Delicious.”

“I’m ashamed to offer so little,” she said, and smiled at the two men eating.

“Not at all, not at all,” murmured Joseph. They ate in silence for a while. “And so what happened to you?” said Joseph. He gestured with a piece of bread at the bandage on Leon’s neck.

“We are forbidden to ask,” said Abu Keiko solemnly.

“Oh, then a love bite. This is why the shopping. It was some gift—she is a fiery one.”

The two men laughed and Junko laughed too and she ran her hand up Leon’s shirt and scratched his back the way she always did, and Leon finally relaxed a little and let her, and ate a couple of olives. Abu Keiko was leaned back in his chair and he contemplated the table for a very long time and then he leaned forward and looked very intently at Joseph then Leon then back at his brother again.

“In the Lebanon,” he whispered, “in the old days, there were many types of people. We came, after much bloodshed, to understand that only half of the people were normal people who could be relied upon to always tell the truth. The other half of the people, we discovered, were vampires. They looked like normal people. But they were vampires, and vampires never tell the truth. And but what made everything more difficult was that after a time, a terrible time, half of the normal people became insane because of the situation and began to uncontrollably lie. And what made it even worse then after this was that after a while, a terrible, terrible while, half even of these vampires too became insane. These vampires were lethal but they told the truth. It was terrible and complicated. You see, normal people don’t tell or believe in lies. But those who are vampires and the insane—everything they spoke and everything they believed in was a lie.”

There was a silence. Leon’s eyes felt wide and he was nauseous again. His mother’s hand had slipped from his shirt and she sipped her tea.

“But who could tell, in those bad old days, when you spoke to someone or when you heard that someone speak, if anything, anything they said was true?”

Leon had a sudden vivid memory of his father. In the memory he was in this same mode: playful, portentous and mock-profound. His father was slowly separating his thumb in two, just visible behind the screen of his fingers, hissing in pain though clenched teeth until he relented as if in defeat to his agonizing effort, and slowly returned his thumb and magically melded the joint again. All the while Leon and Keiko screaming, a silly trick made wonderful, with that hissing, with those clenched teeth.

A long, long silence fell and Joseph studied the table and gamely tried to figure it out.

“You couldn’t,” said Junko, with great mock-sadness, barely distinguishable from the real. “Not ever. It’s awful.”

“No,” Joseph said slowly, “You could ask him trick questions—”

“Could you? It would take time? Several questions?” said Abu Keiko brightly. “Suppose he was armed? Suppose he threatened to bite? Suppose you had only one question. Suppose your question to all those people of the Lebanon was, ‘Are you to be trusted?’ What would the answer be? Leon?”

Leon’s neck was throbbing and his throat was dry and he took another sip of brackish warm water.

“They would all say yes,” Leon said.

“My God,” said Abu Keiko and suddenly he rose from his chair. “See how much time has passed. I must be off to work.”

“Oh,” said Junko and Joseph together in great mock-disappointment and fell back in their chairs laughing.

“Perhaps with time and experience you can parse this complex situation. Tune in to next week’s episode. When all will be revealed. I promise. The government promises.”

“No, a cruel man. A wicked man,” said Junko, and she turned sharply, smiling, to Leon. Her face changed abruptly when she saw what he looked like.

“There are no real vampires,” he said. His stomach heaved again and he turned sideways away from her and threw up three olives and a great clot of transparent bile in a pool on the floor.

Tweet
Tweet
This entry was posted on 17 May, 2012 in homepage, Uncategorized and tagged anti-lebanon, Carl Shuker, Massacre of 1982, Middle East conflict. Bookmark the permalink.