Posted on 4 June, 2015 by HeathcoteRuthven I want to watch Eurovision, but don’t know where to go. I want to avoid staying in, drunkenly nodding along to crap europop, and intermittently lurking in chat rooms discussing the hidden political message of each entry. Maria-Elena Kyriakou, a professor of Greek literature and winner of the Voice of Greece music TV Show, represented the Hellenes this year, singing: “I’m begging you take me/ out of this firing hell/ come back and save me/ what happened wasn’t fair/ nothing left all that I have/ is one last breath/ only one last breath.” Googling around for gay bars, I find one called Fantastiko which I assume will be screening it. The description reads “small and cosy, with loud music and daring go-go boys from former Eastern bloc countries strutting their stuff on the makeshift stage.” I arrive to a depressing sight. The neon sign is smashed, reading only “-stiko”, and the insides are all dust and broken glass. There are few buildings around that don’t appear to be smashed, and despite the lack of any bars, small groups of men silently lurk on every street corner. I’m later told it was the brothel district.

Though I never got to see Eurovision itself, in my search I ran into Spyros, who, with Kantian consistency, can be found each and every night in a same corner of this little ouzerie in Metaxourgeio, sipping tsipuro and nibbling mezze. The previous night I’d met him there arguing furiously with two of my friends, sort of about non-market forms of exchange, sort of about nothing. He looked, and sometimes acted, a little like a Bukowski figure, in an old fashioned American drawl he yelled these very dramatic stories with bombastic and incomprehensible gestures – spinning his hands together, throwing them in the air, and smashing the table with his fists. In tonight’s more intimate setting, we drank until sunrise as he told me about his life. He’d only recently moved to Greece. Before that, after growing up in the ghetto of Toronto, he sold illegal cigarettes, ran hot dog stands and a cozy sounding speak-easy called ‘the Greek speak’. Eventually, quite by accident, he found himself running an art gallery for a decade: “I was in this community of musicians and artists my whole life. One day, a guy says ‘look, you want my studio? Tell me by tomorrow’, so I said, you know, ‘we got a gallery, we got paintings, let’s stick ‘em up.’ So I started painting, doing a little painting, and you know, I was selling them for about $300 a piece, so for a guy that doesn’t know how to paint, not doing too bad, but I got complacent, depressed, complacent…and I wasted those years a little bit.” Bored of Toronto, he came to Athens to properly train in his childhood dream and amateur pursuit – pottery, and gets by exporting a bit of olive oil now and then. I thoroughly liked him, and we spent two more long nights chatting away.

I was rushing around, late for a deadline, and so took my fey schoolteacher friend visiting from Bournemouth, to the University of Athens to do some work. The atmosphere there makes British universities seem grotesquely silent. As we entered an inconspicuous entrance, a huge spiral marble staircase greeted us, thick with smoke, as people stood shouting at each other, occasionally laughing, as if at a manic house party. On the first floor the expressos were 1 euro, the sandwiches 2, and the water free. The Athenian (or perhaps, Exarchian) style seems to consist entirely of either all-black or stylish dresses. Occasionally a combination of the two. Passing through smoking clusters of students on the stairs, a group of depressed looking Orthodox priests walked up the stairs, inevitably, also in all-black. Milling behind , we saw the students react to the priests with inquisitive suspicion. I’m not sure of the status of religion in the country. Several people I’ve spoken to have praised Syriza’s leader Alex Tsipras refusal to sign the religious parliamentary oath. The church are massive landowners who have a strong grip on popular opinion in rural areas, and a vexed relationship with Syriza. Since the election, in a rather damp and mysterious example of divine intervention, there has been a religious icon of Jesus Christ in the small village of Asprokampos in Corinthia ‘weeping’ an oily liquid from its eyes. 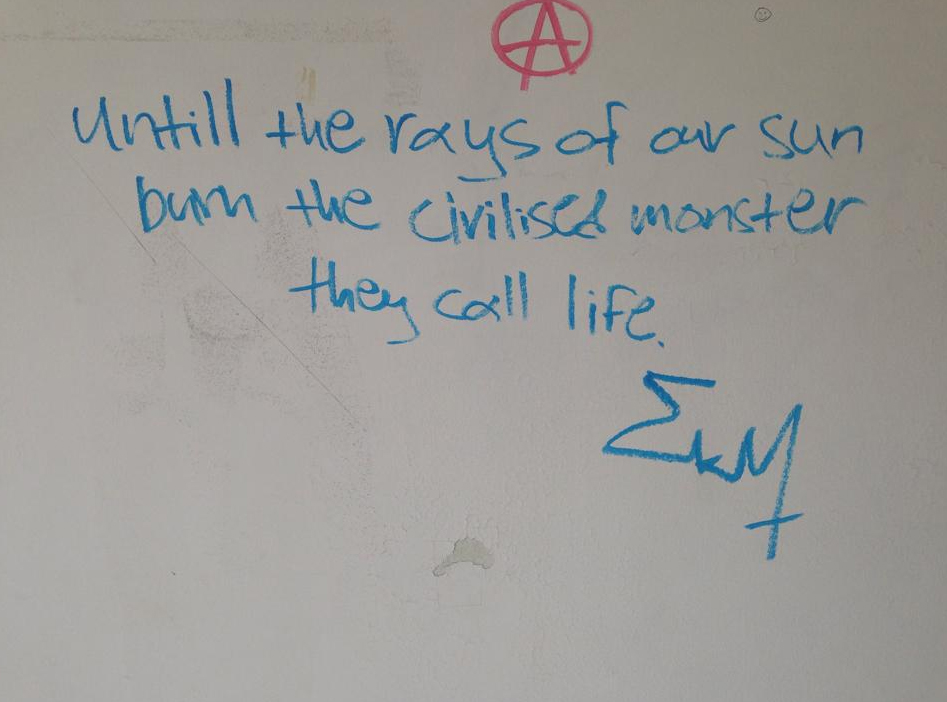 Athens Polytechnic is an international symbol of resistance, often seen as the Tiananmen Square of Greece. In November 1973, a year before the collapse of the 1967-74 military junta, students occupied the building and started their own anti-state radio broadcast. After a week or so, tanks rolled in and murdered 35 students, injuring 100s more. The legacy of the massacre is still visible. The twisted, rusty gate from then now functions as a war memorial. The police are not allowed on campus. Every wall of every building, inside and out, is covered in thick layers of graffiti, some angry, some ambiguous: ‘OUR FREEDOM IS THEIR NIGHTMARE’, ‘ACAB ACAB ACAB’, ‘FUCK ARCHITECTS’, ‘I WAS MADE TO LOVE MAGIC’, ‘UNTIL THE RAYS OF OUR SUN BURN THE CIVILISED MONSTER THEY CALL LIFE’, and so on. There were huge beautiful murals of people killed by police and fascists, such as the rapper Killah P murdered by Golden Dawn members two years ago. I was with my philosopher friend, K, who was involved in the UK’s 2013 Cops Off Campus movement that took direct inspiration from the Polytechnic uprising, and the experience of walking around the campus was very powerful for both of us. The national holiday meant the place was totally deserted, amplifying our sense of the past.

Later we met with Sissy Velissariou and Georgia Sagri, an academic and an artist. Georgia has brilliant capacity to disrupt everything, every talk, every protest. She told me she had a birthday present for me and ripped out a page from her notebook (“straight from the production line!”), handing me a beautiful drawing of a gaggle of severed heads on a plinth. We met in Alexandrino, which serves the best Negronis in the whole of Exarchia, and had a variety of very animated and interesting discussions. Sissy is an English Literature professor, member of Syriza, and Vice President of Institute for Nikos Poulantzas (a French-Greek Marxist theorist of the state, who died by his own hand in 1979). We’d been introduced by way of her friendship with K’s father. She emphasised how the crisis had hit the middle class, telling us about plush suburban homes she’d visited where engineers and architects were unable to afford spaghetti. It pessimistically reminded her of Poulantza’s essay describing how the destruction of the middle classes, who tend to veer to the right, lays the ground for fascism. They attack the immigrants, then the homosexuals…Anyone different. The severity of the crisis became obvious to her when people started throwing themselves out of windows. The sharp 35% increase in suicides since 2011 is totally unprecedented – “Greeks don’t deal with tragedy by killing themselves, they just don’t. It’s not like Japan or somewhere where they have a culture of it.” Family solidarity networks, which have previously ameliorated the worst symptoms of poverty, are breaking down. It is striking reminder of the importance of solidarity networks that, with two thirds youth unemployment and no dole to speak of, young people can actually eat at all.

After talking like this for a while, K and I spent 15 minutes waiting for Georgia’s little red Vespa to kickstart. Eventually the three of us snuggled onto the tiny seat and loudly revved around the city looking for a cash machine that hadn’t been destroyed by anarchists. Eventually one turned up, and we ate some mezze, chatting morbidly, in a small bar that never seemed to close.

View all posts by Heathcote →
This entry was posted on 4 June, 2015 in homepage and tagged Athens, austerity, Greek Crisis, Heathcote Ruthven. Bookmark the permalink.