Posted on 8 August, 2012 by AlanMorrison 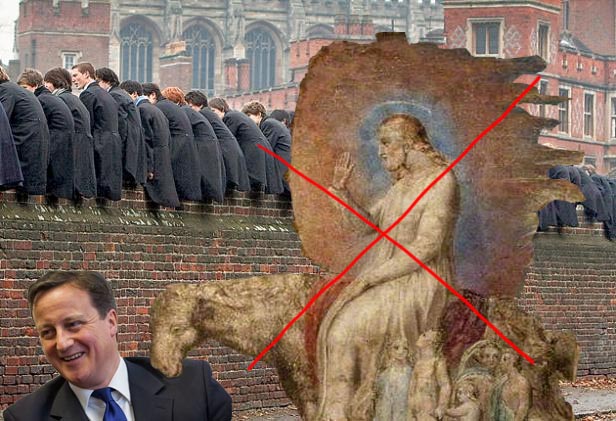 Our irony-proof prime minister stumbles on cluelessly with yet another symbolic cultural insult, this time to socialists and poetry lovers alike: the trans-satirical announcement that in future William Blake’s revolutionary poem ‘Jerusalem’ (from his epic sequence Milton), as adapted to music by Sir Hubert Parry (1916), might be used for the nation’s sports anthem. This all uncannily echoes those Union Jack-waving Thatcherite rallies of the Eighties to ‘I vow to thee my country’, an asinine lyric by Sir Cecil Spring-Rice set to an adaptation of the less memorable passage of socialist composer Gustav Holst’s majestic ‘Jupiter’ – a passage which once had the sobriquet of ‘Thaxted’, named after the Somerset parish in which Holst once lived – along with other socialist artists and intellectuals – at the time its legendary ‘Red Vicar’, Christian socialist Conrad Noel, was in residence at the local church where he famously hung a red flag alongside St George’s and Sinn Féin’s (Noel also founded the Trotskyite ‘Catholic Crusade’). But regards ‘Jerusalem’, possibly Cameron only knows the first deceptively bucolic verse in this great anti-industrial poem:

And did those feet in ancient time.
Walk upon Englands mountains green:
And was the holy Lamb of God,
On Englands pleasant pastures seen!

One suspects the following verses may well be surgically removed from any sporting adaptation in the future:

And did the Countenance Divine,
Shine forth upon our clouded hills?
And was Jerusalem builded here,
Among these dark Satanic Mills?

I will not cease from Mental Fight,
Nor shall my Sword sleep in my hand:
Till we have built Jerusalem,
In England’s green & pleasant Land.

Or maybe not: this is after all the same prime minister who cited The Jam’s ‘Eton Rifles’ as one of his favourite pop songs, a Paul Weller-penned diatribe against the private school elites, which includes such lyrics as:

Thought you were smart when you took them on
But you didn’t take a peep in their artillery room
All that rugby puts hairs on your chest
What chance have you got against a tie and a crest?

Hello-hurrah – I’d prefer the plague to the Eton Rifles

Did Cameron honestly think this was some sort of hagiographical drinking song in tribute to his alma mater? He reprised his lyric-blindness during the pre-election Tory conference, playing out with The Style Council’s ode to the unemployed and downtrodden of Thatcherite society, ‘Shout To The Top!’, which includes Weller-penned lines such as:

Hardly a song for those lording it over us at the top of society one would think; more a defiant cry against Thatcher’s brutalisation of British society, which could well be sung again today in the welfare-capped austerity of the ‘Big Society’. Not to mention the fact that the video of this song was filmed in front of a massive mural depicting the tribulations of The Miners’ Strike of the time, which The Style Council explicitly supported, as codified in a previous single, ‘Soul Deep’ (1984, under the moniker ‘Council Collective’), the proceeds from which went towards funds to maintain the miners while they continued their strike (but one doubts Cameron would ever use a song with lyrics such as ‘We can’t afford to let the government win / It means death to the trade unions’).

Perhaps Cameron’s metaphorical humility should be perversely saluted, since clearly implicit lyrical sentiments of all three of these socialist songs, doesn’t get in the way of a good rhythm for him… He’s willing to put the messages to one side in pursuit of a philistine bowdlerisation of their explicit political purposes. However, this writer believes there should be a law introduced to protect the political manipulation of any cultural sources implicitly in contradistinction to the ideologies politicians wish to hollow them out in order to promote. We might call this something like the Posthumous Protection of Implicit Politics in Poetry and Lyric Edict’– or ‘Pimple’ for short.

If Blake were here today, he’d most likely be protesting outside Downing Street at the ideological theft of his iconic rallying-cry for social revolution against the punishing tyranny of industrial capitalism. For what it’s worth, and in the rebellious, militant spirit of Blake himself, whom we are sure would approve, this writer offers Cameron a version of ‘Jerusalem’ with which it believes the prime minister would feel more ‘metaphorically comfortable’, and indeed, perceive as more fitting to the reality of his ‘Big Society’:

And do those hoofs in modern time
Scorch through the Big Society:
And is the Smoking Tory Torch
On England’s sulphur pastures mean!

And did Conservative Design
Cleanse forth all NEETS and ‘Wrag’-tagged twills?
And was the Welfare State wrecking-balled
To gentrify drawn-curtained sills?

I will not cease from Titled Right,
Nor shall my Torch sleep in its stand:
Till we have trashed the Welfare State
In England’s need-resenting land.