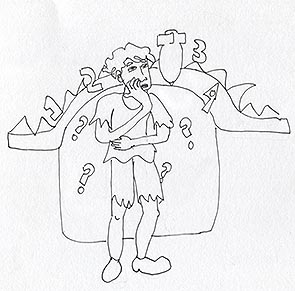 Children are rather hard on their clothes which soon wear out or are lost. This can be somewhat irritating to their mothers and Adolf Hitler was not known to consider them in his attempts to subdue this island; even devising infernal machines to send over and contribute to this effect

The sand quarry lies a half-mile or so from the boy’s house. It has been abandoned since the beginning of the war and the rusty buckets hang on high cables and creak eerily as they sway in the wintry wind. Rushes grow around the edges of a sizeable lake of water, and the sandy ground has been deeply scored by the hungry buckets, leaving valleys and hillocks to collect a green verdigree of war-time grasses and providing an ideal playground for local children. There are myths of drownings in the lake and mothers sternly forbid entry to its domains; a dictum which is often defied.

The boy is with two friends; they huddle together on the sandy edge of the lake roping together half-a-dozen scaffolding planks to make a raft which they intend to sail across the lake to a small rush covered island. The raft looks unsafe, the planks only loosely held together, but they push it into the water and two passengers jump aboard. The boy holds back, there seems little room left on the raft and even as he hesitates the lashings come loose and the planks begin to drift apart.

Adolescent voices bleat with fear as the two boys fall through and are plunged up to their armpits in water. They clamber woefully out, shivering and dripping onto the shore.
‘My mum’s going to murder me,’ says one boy, on the verge of tears.
‘So’s mine,’ whines the other.

Stiff-legged and dripping they slosh miserably off to face the music and the boy, unwilling to call it a day lingers for a while alone skimming stones across the surface of the water. He is preoccupied with this and does not at first hear the distant clatter which forewarns of something nasty coming his way. The sound increases and now cannot be ignored. The boy suffers a sudden jolt of fear and looks up into the sky, searching frantically around until he sees the source of the clatter. Still far off, but heading his way comes a torpedo shaped craft with short stubby wings and a pulse-jet engine projecting from the tail.

The boy is in a quandary; it is too far from home to run and there is no public shelter within reach. If the engine cuts out now he is done for. The ‘buzz-bomb’ rattles on, its engine making the familiar irregular stutter which has been much heard night and day of late, but since the deadly machine has been nicknamed ‘Doodle-bug’, or ‘Buzz bomb’, it is held somewhat in the same regard as a cartoon character, more of a nuisance than a menace, and only when under direct threat do those below feel afraid. At night their engines are easily distinguished among the snarling machines which criss-cross the darkness, attacking or defending the land beneath, and the legendary moment when the engine cuts out is spoken of with great solemnity.

During daylight hours and, should there be sufficient warning, a challenging Spitfire will ascend and flying alongside nudge the bomb with the tip of its wing, often succeeding in turning it into a path which will take it towards the coast and out over the sea. The boy has witnessed this feat many times and watched without fear the skilful manoeuvre, ready to dive into a shelter should things go wrong. But here at the sandpit he is far from safety and the flying bomb will pass directly over him unless the fuel runs out first, which at the moment is his greatest concern.

Counting is a useless magic against these weapons which, once the engine has stopped glide to earth in an unpredictable manner. Sometimes soaring against the wind and gliding on a long gentle path downwards they reach the ground many miles further on, whilst at other times they will dip sharply and plunge like an arrow down onto their random target, and the explosion is formidable, with power enough to obliterate half a street at a time. The boy’s heart is slamming against his ribs as if knocking to get out and he prays for the bomb to keep going; now very close its clatter fills the air and is suddenly silent.

He does not wait; it is useless to run; but he runs. Flinging himself wildly across the broken ground and sobbing with terror he runs until the silence ends with an ear deafening roar which seems strangely muffled, and a great wind lifts him from the ground like a leaf, sending him tumbling through the air and dropping him aeons later with mind numbing force face downwards onto the sandy soil.
He lies there just breathing for a while as clumps of earth and stones rain down about him. His clothes are wet and opening his eyes sees before him his two hands, fingers deeply clawed into the earth as they hold on for dear life to the only thing available. The backs of the hands are streaked with wet sand and mud, his arms too are similarly besmeared and moving his head he dislodges more of this soggy sludge.

Sitting up he looks back towards the lake. The raft has gone and the reeds are sheared off at the waterline. The surface is a seething cauldron of muddy froth over which hangs a cloud of oily smoke and fine debris. The centre of the lake still heaves and is sending out concentric waves to break against the shore. He raises his hand to his head; his woolly hat is missing, blown to kingdom come by the blast and now he knows he’s really in trouble.

‘Keep it on.’ His mother had ordered when finally the shapeless thing had emerged from her rapidly knitting fingers. ‘I don’t want you catching cold.’
He stands up and shakes himself down, the walk home will dry him off and the sand will then brush away easily. He doesn’t want to think about the buzz-bomb, his good fortune seems of too high a magnitude to get into perspective, but he is worried about the hat.
Leaving the quarry he meanders his way homeward, swinging his jacket around to rid it of sand, by the time he gets home he will be quite presentable and at least his boots are not wet. The Sceptred Isle is parsimonious with its coupons and his mother keeps a constant eagle eye on his clothes; he must answer for every tear or scuff, and woe betides him if his boots are wet. Reaching the house he gives himself one last check and knocks the door. His mother is preoccupied.

‘I’ve got the kettle on,’ she says, bustling back to the kitchen and paying him little attention. He hovers around outside the kitchen watching her as she prepares their tea. After a while he cannot contain himself.
‘Did you hear the buzz-bomb go off?’ he asks.
She is mashing potatoes and looks briefly up at him.
‘I heard it,’ she says, ‘and where were you?’
She is mashing again and he doesn’t answer; she seems not to have noticed, but he cannot stop.
‘It went off right near me,’ he boasts, and begins describing the exploding water and his short flight through the air.
She listens to his raving whilst putting two slices of Spam on a plate, followed by a couple of dollops of mashed potatoes.
‘What water?’ she says, catching him unawares. His babbling comes to an abrupt halt; he cannot escape this.
‘Down at the quarry,’ he whispers.

They sit down and begin the meal.
‘Avn’t I told you to keep away from there?’ her voice is sending him into instant disgrace.
He doesn’t answer and keeps his eyes down. There is an ominous silence, then…

‘And what have you done with your hat?’