Boris Johnson: The Beast of Brexit

On 15 April 2016, the London Review of Books blog’s editor Thomas Jones published a post about Heathcote Williams’s latest pamphlet, titled ‘Boris Johnson: The Blond Beast of Brexit – A Study in Depravity’. Williams has privately circulated his unsigned pamphlets for forty years, but public interest in his latest takedown was unprecedented. The blog was the most-read article on the LRB website for a week; several people came into the London Review Bookshop asking for a copy. The LRB has therefore agreed to distribute, on behalf of Williams, a limited print run of the pamphlet to satisfy public demand as debate about Brexit becomes ever more hysterical. A Study in Depravity costs £7.99 and is available now, exclusively, from the London Review Bookshop in Bloomsbury. Ask for it by name.

Heathcote Williams is an English author, poet, playwright and actor. He has been self-publishing political pamphlets for the last forty years.

Pamphleteering in England goes back nearly 300 years, represented most famously by such 18th-century polemecists as Henry Fielding and Daniel Defoe, and in America by the British-born Thomas Paine. Even the poet John Milton was a pamphleteer. The tradition continues. Ken Livingstone, the former socialist mayor of London, was on his way to the University of Cambridge to give a talk on current British politics when he was handed an unsigned pamphlet about Boris Johnson, who defeated him in his bid for re-election in 2008. The damning title of the pamphlet? “The Beast of Brexit: A Study in Depravity.” 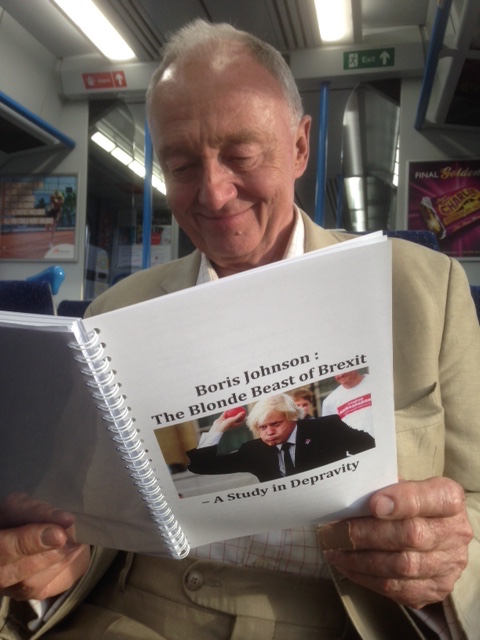 Ken Livingstone, the former socialist mayor of London, grins with enjoyment while reading ‘The Beast of Brexit: A Study in Depravity.’

In a blogpost at the London Review of Books, Thomas Jones wrote that the author of the pamphlet “assembles a blistering charge sheet against his target: climate change denial, dishonesty, hypocrisy, incompetence, racism, violence, ‘remorseless self-promotion,’ ‘a ruthless and often cruel ambition together with an elitism and a ferocious temper when challenged.’ He doesn’t say anything that hasn’t already been said, but I doubt anyone’s said so much of it in such a concentrated form before.”It turns out that the pamphlet was written by the poet-playwright Heathcote Williams, “drawing on biographies of [Johnson] by Sonia Purnell and Andrew Gimson,” as well as “a great many newspaper articles, Johnson’s own journalism in publications from the Eton Chronicleto the Daily Telegraph … and a few of his countless TV appearances.” 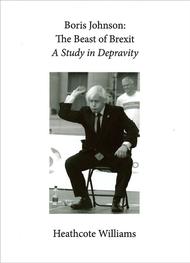 At the LRB Bookshop, London

The blogpost became the most-read article on the LRB website for a week. After people came into the London Review Bookshop asking for a copy, LRB decided to distribute a limited print run of the republished pamphlet to satisfy public demand prompted by the Brexit referendum coming up on June 23. The referendum will decide whether the U.K. will remain in the European Union or whether it will “exit” — thus the term Brexit. Williams, who describes the Brexit debate as “ever more hysterical,” has privately circulated his unsigned pamphlets for 40 years, but public interest in his latest takedown is said to be unprecedented.The depravity under examination “isn’t sexual,” Jones wrote, “though Williams doesn’t scant on documenting Johnson’s extramarital affairs … along with a few of his sexist and homophobic utterances” and so forth. The depravity is Johnson’s politics. “The reason Williams has picked on Johnson now is that he is ‘widely judged to be the heaviest hitter’ in the campaign for Britain to leave the European Union (the others are ‘unimpressive also-rans’).”

Furthermore, “Williams is unabashedly in favour of the EU”:

He praises it for being ‘environmentally literate’, ‘anti-colonial’, ‘unaggressive’ and ‘unwarlike’. The British campaign to leave the EU, by contrast, is ‘led by a cadre of Conservatives who protest their love of country with a self-satisfied zeal … while they fight with a low cunning to conserve a depraved British body-politic based upon an unconscionable disparity between untold wealth and unspeakable poverty and upon the idle values of transient celebrity.’

Truly in the best of 18th-century pamphleteering tradition.

Speaking of Politics: ‘A Study in Depravity’