Breath of a Salesman 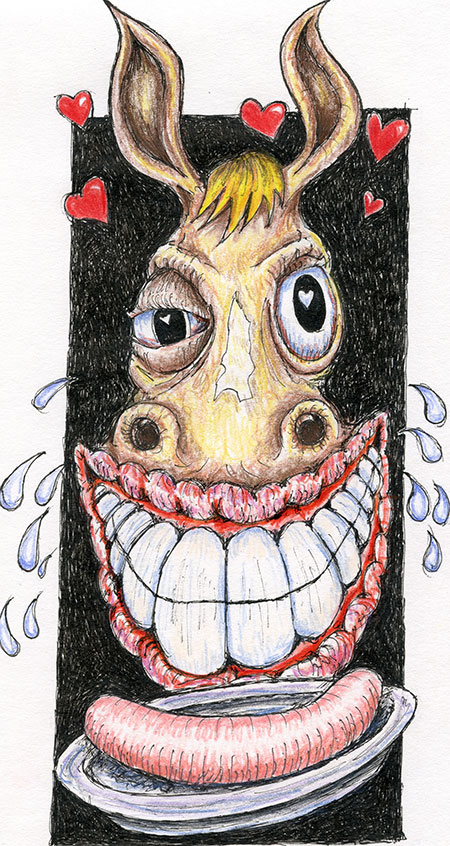 Never look a gift-horse… There I was, Saturday lunchtime, watching the news, when there’s a knock at the door. And there’s this handsome young black guy, all suited and booted, with a clipboard. Straight away, he launches into a sales pitch, and he being young and handsome, I let him. He’s selling a mail order ready-meal service, you know, like those ones they advertise on TV, only this is proper middle-class, and these meals are all made with the finest organic ingredients, like I give a shit, and they’re only £29.99 for six dinners, better than the cheaper supermarkets, he says, and all he needs is my credit card details and he can set me up with an account right there.

“I can’t afford it,” I say, “I’m a writer.” “Oh, right. So, you live on your own then?” The bloody cheek, I think, why does everyone presume I’m single? Then I notice he’s looking over my shoulder into the flat and realise the little fucker is still trying to make a sale. “I’m single,” I say, with a dismissive little shrug that’s meant to suggest I’m OK with being single, that it’s a lifestyle choice – my choice – and I’m doing just fine, thank you very much.

He moves into the living room, shoots only a cursory glance at my print of Picasso’s masterpiece Guernica – that’s just ignorant, far as I’m concerned – then stands over me as I slide down on the brown leather sofa and start to roll a cigarette. “So how do you want to do this?”

“I just want to get fucked by another guy.” Oh, thank God, he’s bi-curious – explains it all – here we go again – waste of fucking time. “I’m not into fucking,” I say. “You’re not into fucking?” Well, yeah, I’m into fucking – I’m just not into fucking, if you know what I mean.” He doesn’t. He says “Just a blowjob then?” “Sure.” I light my cigarette and try not to lick my lips. “Mind if I take a shower first?” he asks. “I’ve been sweating all day.” I must be dreaming. “You can join me if you like.” “Nah, I’ll just finish my fag,” I say and point him in the right direction. While he’s in the shower I carefully conceal a kitchen knife near the bathroom door – just in case, you understand – and pause to wonder if this is really happening or if I’m still in the arms of that morphine I took last week.

But it isn’t the morphine, because minutes later I’m standing in the bathroom, pants round my ankles with my dick in his mouth, and he’s deep-throating it, drooling like a blood hound, with breathe that could skin a rhino, but it doesn’t matter because I’m pushing his head down and – Ow! – he fucking bites me – but I don’t care because I’m not gonna last much longer and – Ow! – he keeps biting me – but I can’t stop and I gasp and he gulps – his uvula moving up and down – and he swallows the fucking lot (I’m 49, there wasn’t a lot, but this is my article) and I shudder and get that shaky leg thing.

As he dresses, I have to ask: what the hell just happened? “What do you mean?” he says, buttoning his shirt sleeves. “You took a real risk there.” “So did you.” “Yeah, but I could’ve been straight; I might have smacked you one. How did you know I was queer? How did you know I’d be interested?” He smiles. “There’s lots of gays round here. When you said you lived on your own, I took a chance.” “Even so, I could’ve been offended; you might’ve lost your job.” He shrugs. “I took a chance.” Spoken like a man who hates his job. 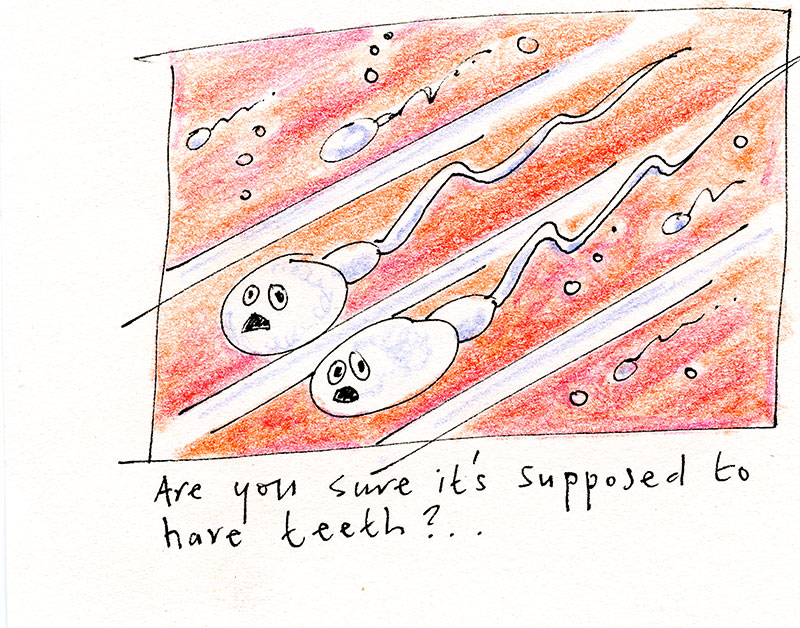 Mark Fisher was dragged up a working-class Catholic. A need to “look” in early life led to Mark studying art at Manchester Polytechnic. He spent the next thirty years studying life via all the joys and horrors of working in social care. An exaggerated sensitivity to “being and emotionality” means he wants you to look and think. Mark can be reached at [email protected]

Tweet
This entry was posted on 22 November, 2017 in homepage and tagged Leon Horton, Mark Fisher. Bookmark the permalink.