Brexit Forces Minimum Wage Back To Piece Of Bread And Cheese 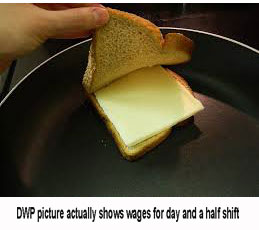 The government has announced post Brexit financial conditions will force the minimum wage back to one piece of bread and cheese per day, in line with Victorian pay rates. Ministers said that the cuts, which will be known as the ‘new meal deal’, were unavoidable but suggested that there was a silver lining around the cloud as share holders and owners of the top FTSE companies were overjoyed to hear the news.
Timothy Cockstop a London cab driver who voted to leave the EU ranted, “That’s what we voted for ain’t it – to get rid of facking foreigners. And at least it’ll be propa British cheese. Not that facking gooey Euro shite! An’ it’ll be facking propa English bread: white and sliced, Not a pouncing French stick or a sodding aux d’facking choco la dee’pouncing dah. Anyway, I’m sorted for dosh ain’t I. Peeling all the foreigners who get in the cab. Yus my son. This job’d be nightmare without facking foreigners.”
Mohammed Khan, 44 from Tilsbury, a Tesco’s ‘intern’ noted that one piece of bread and a piece of cheese actually represented a 200% pay rise as he was currently working for the successful multinational company for free in order to satisfy his work and pensions training contract. Tescos’ representatives are thought to be lobbying the government to make interns like Mr Khan exempt from the new minimum wage as they feel it will be irresponsible to give employees ‘unrealistic aspirations.’
Maurice De Gobblebollocks, Conservative minister in charge of muting wages, guffawed, “At last those in the top FTSE companies such as my father, and indeed myself, will be unhindered by cumbersome EU regulations and able to return our pay scales to a tried and trusted Victorian level. As long as we remember to keep the pieces of bread small enough and slice the cheese extremely thin, then I’m sure the UK can, once again, compete on level playing field with our new trading partners in China.”
.
In the news

Brexit ‘will stunt national living wage growth by 10p an hour’ ….. 10p drop inminimum will be a luxury to anyone left with a job if all the companies move into the single market …

Are you on minimum wage? Experts say Brexit will cost you £195 next year

1 day ago – Brexit could knock almost £800 off the annual wage of the country’s … down average pay growth, with a direct effect on how the minimum wage is set. … should confirm next year’s rate in theAutumn Statement next month, but …

View all posts by Ethan →
This entry was posted on 13 October, 2016 in homepage and tagged current affairs, Ethan Harrison, politics, satire, Social commentary. Bookmark the permalink.