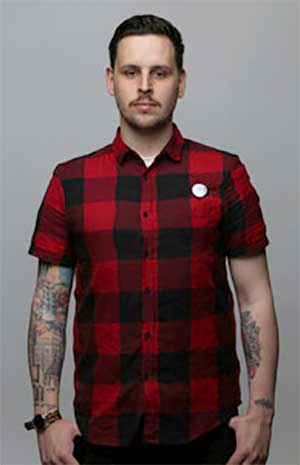 ‘I lay out my / unrest like white lines on the slope, so that / something out of broken sleep will land / there.
– J H Prynne, ‘Smaller Than The Radius Of The Planet’

Broken Sleep Books is a new poetry press producing poetry pamphlets and books in beautifully minimal cover designs, as well as e-books of the same publications. They have 14 titles scheduled for 2018, and a second season for 2019 is partially planned. Their radical submission criteria and list of authors, as well as the fact I know both editors and have a pamphlet published by them, intrigued me, so I decided to interview Aaron Kent, one of the editors.

Rupert Loydell: So, Aaron Kent and Charlie Baylis start up a new poetry press, and you’re straight in at the deep end, with two seasons of books already planned. How did that all happen?

Aaron Kent: We originally only planned two titles a year, 2018 would be Chris Kerr and Sarah Cave, then 2019 would be sally burnette and one more. The plan was to produce limited runs of works housed inside of old cassette cases and VHS cases, but this became problematic. I wanted more people to be able to access the work, it cost a lot of time and money, and it meant I had to reject a load of submissions I liked. So I examined other options and went with print-on-demand which allowed us to accept more writers and release more books. The plan is to release at most 14 books a year (13 books and one anthology) with a gap between seasons (between 3-6 months) but if I keep getting work I love I’ll probably expand that. I don’t want to do more than 2 a month though.

RL: You and Charlie seem like two very different characters. How do you manage to co-edit and share the business side of things?

AK: I agree, and I think that is why we work so well. Charlie’s focus is on editing work – and Chris Kerr, for example, and Charlie have similar styles so I think that really helped. When I started running Broken Sleep I asked Charlie to help as an editor, and it has been really useful. We’re really good friends and chat over WhatsApp a lot, so we have always been in communication. I run the business side, the typesetting, releases, and do some editing, and Charlie purely focuses on editing works that suit his style well.

RL: You seem to have fallen foul of the immediate rush by authors that happens to every small press that starts up, and almost immediately had to announce on the website ‘we are currently closed for submissions’. How does that feel?

AK: I’m really happy with that – we had some wonderful submissions (And some strange ones) but to be able to shut the doors and focus on the work we have taken on is a big relief. I didn’t want submissions to be rolling on for ages, which would mean it’s always hanging over our heads, we’ll only open for submissions one month a year from now on, then focus on what we accept. Besides, a lot of our work is from poets who I have gone to directly, not much is from submissions.

RL: ‘ Broken Sleep Books are dedicated to works that transcend the page, and are more than just poets writing poetry. We believe the greatest pieces of writing exist outside of expectation, and are written with more than the act of writing in mind.’ What does this mean? How can writing transcend the page? Is it some kind of magical resonance, or more to do with performance?

AK: There’s an interview with J H Prynne in which he describes going to see a writer (Snodgrass) with Cid Corman because Corman encouraged him to go. Prynne asks if they are going because Snodgrass is interesting and Corman tells him they are going because Snodgrass is not interesting, he is a boring writer making boring headway with potentially interesting material and he is reducing the wonderful language to ashes in his facile and imitative, uninteresting hands. To me that sums it up.

RL: In addition to submission guidelines that state that you ‘have no interest in misogynists, racist, sexists, the alt-right, or dickheads in general’, you also state that you ‘wish to encourage more working-class writers, non-binary, and BAME writers to submit’. An admirable declaration, but how will be evidenced in the work you publish rather than the poets’ lives?

AK: As a working-class writer myself, I found poetry closes a lot of doors to the working-class, non-binary, BAME, LGBT, disabled, etc. Submission fees are a big bane of mine – that I have to save to afford one competition and have to choose carefully, whereas others can submit multiple poems to multiple competitions. I’d like to make Broken Sleep a place where individuals can submit without fear that the gates are shut in front of them. We have seen very few submissions from BAME writers in particular, and I don’t want it to be tokenistic with regards to me asking just to have a BAME writer on the list, but I would like to see more diverse submissions.

RL: When I first met you were writing and performing slam poetry (and I might add doing very well at it). How have you moved from the more popular or immediate kind of poetry to the complexities of Claudia Rankine and J.H. Prynne, whose quote on your website (and reproduced above) you have adapted as a slogan for the press: ‘Lay out your unrest’.

AK: When I think back to my slam poetry days I cringe a little. I was reading very few poets and works of poetry, and I wasn’t good. I don’t think I was good at least. When I started reading more poetry and throwing myself down rabbit holes I found that slam poetry interested me less and the complexities of the written language interested me more.

RL: If I may be more personal, before becoming a writer you served as a submariner in the Royal Navy. I may be naive, but to me that doesn’t sit with the left wing attitudes attached to your press. Are you able to speak about your personal journey into writing?

AK: I had to get away from my situation at the time, I was in a very abusive and difficult situation and I had to find an escape. It was the recession, I wasn’t very politically motivated or aware, and the military offered me good money and the prospect of travel. While in the military I became more aware of the hegemony of violence, xenophobia, and aggression that was rampant within. I left, got educated, became politically aware, and now I’m an anti-trident ex-submariner.

RML: Is Broken Sleep for the duration? Many small presses start in an explosion of enthusiasm and naivety before imploding under the weight of author’s expectations, financial problems and critical indifference. What is Broken Sleep Books’ relationship with mainstream presses and journals going to be?

AK: I believe so. I don’t rely on it financially, so if it makes a loss then I can still run it. I’m doing it for the writing, and to publish poets whose work I admire, not to make cash, so there should be no reason to shut. Though I will make sure we have a couple months off a year.

RML: Good luck with everything, and thank you for your time.

View all posts by Rupert →
This entry was posted on 15 September, 2018 in homepage and tagged Broken Sleep Books, Rupert Luydell. Bookmark the permalink.