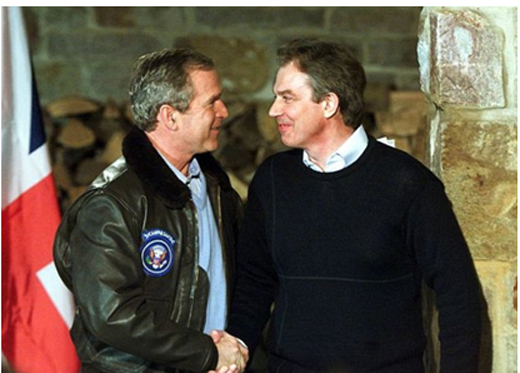 There’s a photograph of George Bush and Tony Blair
Staring ecstatically into each other’s eyes
Caught up in a heady, if not deadly, infatuation
Doubtless blinded by the usual lovers’ lies.

Are they whispering sweet nothings to each other?
‘You must come and stay at Chequers!’
‘And you, you must come to Camp David!’.
Like two besotted home wreckers.

‘So good to find that you’re on the same wavelength –
So glad we both agree about Saddam’.
‘Yes, I mean, George, you can tell can’t you, from how he looks
That he’s really and truly a jolly bad man?’

‘Well, we thought he was okay for a bit, Tony, but not for long.’
‘No, not your kind of guy. George, no, absolutely not…’
‘You know, between you and me he’s got more oil than the Saudis
So if we go ahead, Tony, we get our hands on the lot.’

‘How are your twin daughters, George, Jenna and Barbara?’
‘Fine, fine, how are your sons, Tony?’
‘Oh, we’re hoping to send Euan to Yale or to Harvard…’
‘No problem just leave it with me.’

‘You know you’re quite a guy, Tony. Two million out on the streets
And the House of Commons in uproar,
And I’ll never forget how you brushed it off: “a little local difficulty.”
That’s how we came together, didn’t we? We climaxed in war.’

Their turbo-charged bombers went in then the bodies came out
And during their courtship they both prayed to the Almighty
To help them bond, just like the Colgate toothpaste they both used
As they’d reveal at a joint Press Conference, giggling flightily.

Were they destined to meet? Was it written in the stars?
Had they perhaps met in another lifetime?
What a romance! What a meeting of minds! you can tell
From their picture they’re both on Cloud Nine.

But like all good things it had to come to an end –
Their memorably world-shattering passion.
For their wedding breakfast they’d broken a million eggs;
Their honeymoon had suicide bombs and assassins. 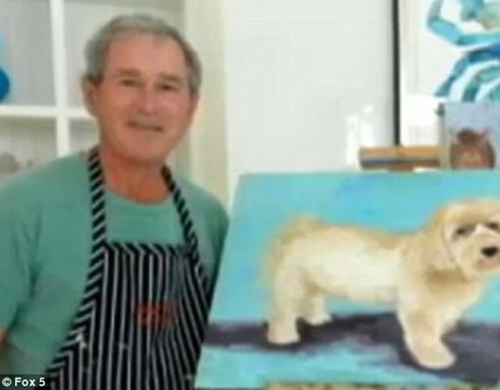 The loving couple are now living separate lives:
George is in Texas painting dogs
And wistful portraits of his friend Tony, now looking
As mad as the proverbial box of frogs. 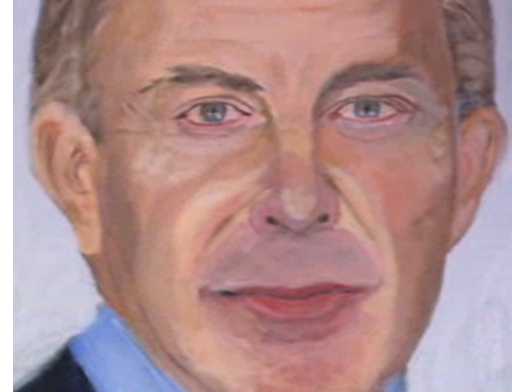 But they still have something in common,
Something left over from happier times,
Though their travel arrangements are sorely limited:
They share being wanted for war crimes.

And they’ve both come together to prevent their letters
From being exposed to public view;
They still have enough clout in government circles
To suppress, ‘I love you,’ and ‘I love you too.’

George now likes to slash at weeds on his Texas ranch
And Tony likes to make money –
The legendary Anglo-American lovers who make no secret
Of having had mass murder as their hobby.

Tony says he’d do it all again and there’s their photograph
Steaming with sexual attraction,
‘Let’s go to war,’ says one, ‘Let’s go to bed’ says the other.
Caught in flagrante on the eve of destruction.