Calling Forth the Great Revolution 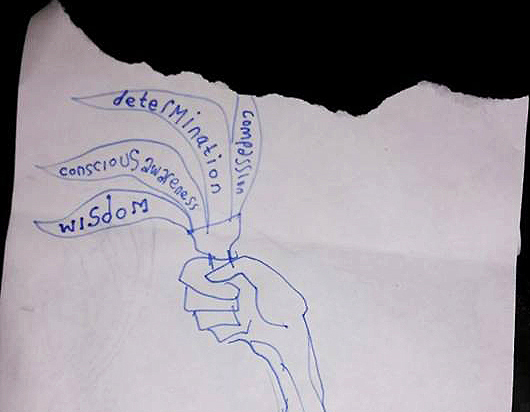 There is no other way of changing a society than through the process of change in the individuals who make up that society. Nor is it possible to change people from outside. However, it is possible to inspire an awakening, or reawakening of the individual or individuals, through sharing awakened energy.

This is the essential significance the word ‘guru’ or teacher. But rare indeed is the guru who both preaches and practices true awareness raising. Holistic awareness. For these are true revolutionary qualities.

But revolution does not usually feature in the consciousness raising messages of gurus. Maybe this is because most stop at the first station and then float up to the ether beyond. That station stop goes under the heading ‘spiritual emancipation’. However, spiritual emancipation is not synonymous with

holistic change, the only force capable of catalysing true revolution.

However, spiritual emancipation is a very attractive idea to many Westerners, especially the ones essentially seeking to escape from something bugging them about their own lives; their own unresolved predicaments; their various hang-ups. Maybe because it appears to offer some form of liberation – and even salvation – from these.

Perhaps because it’s a way of escaping into a world of peaceful quietude, where ‘inaction’ is said to be the only action worth taking. A state which can supposedly liberate the troubled soul and allow the individual to ‘find himself/herself’ anew, within the all encompassingness of ‘the now’.

This is all well and good, as far as it goes. But it does not go far. In fact, I’m going to suggest something some might find rather shocking: it may be one of the main reasons that the real revolution has still failed to materialize.

Failed to take place in spite of thousands of years of such practices being performed by tens of thousands of individuals. Many believing that they had succeeded in attaining ‘enlightenment’. And many millions more adorating their supposedly enlightened masters.

In spite of all this supposed ‘rising awareness’, real, deep revolution on any significant scale, has never yet occurred on planet Earth.

What is real revolution?

Real/authentic revolution involves a major root and branch shift in the make up and direction of society as a whole. One in which the physical, mental and spiritual needs of mankind have the possibility of being realized by the majority, not just by a minority.

It is not a social revolution, but is a human revolution; since it incorporates these three elements (physical, mental, spiritual) essential to all individuals in order that they can live-out their birthrights. To have equal opportunities to grow into their full potentiality.

For a very long time, mankind has suffered a system of top down control, in which a minority hold power and influence over the majority. Stealing the resources that would enable a more equal distribution of wealth amongst all mankind.

A redistribution that would instantly end starvation. Would end the starvation of body, mind and spirit which has kept mankind from flowering and reduced huge numbers to living the lives of slaves.

Marxist, Maoist, Bolshevik or French revolutions, for example, have amply demonstrated the weakness that stands behind purely social/cultural revolution. Here, the repressed rise-up and overthrow their repressors. After a brief period of celebration, they then impose their own particular doctrine or dogma on those whom they had earlier led to ‘liberation’.

So the cycle is repeated once again, with a ‘working class’ struggling to supply their new masters with the bourgeoise life style which they themselves had previously condemned for its repressive dogma, wealth hoarding and denial of human rights.

So long as this cycle keeps repeating, self evidently, there can be no ‘real revolution’.

So what could break the cycle?

Two things: a total, or near total, collapse of the current worn-out neo liberal, capitalist, communist, socialist … or any other ‘ist’ regimes that have been held up as ‘progressive’, when in reality they are regressive. And/or, an openness and desire by the general populace, for wise and enlightened leadership. Rather than an acceptance of leadership by puppet dictators under the control of banks and corporations.

The first solution is not, of course, a revolution in itself, but could bring about a situation in which new approaches, based upon sharing and caring, would have the opportunity to establish themselves. Since the chaos that a near total break down of the status quo would bring, would also represent an opportunity for something quite different to sprout up from its ashes.

However, for this to happen, a second element will need to be active in the wings, ready to be immediately manifest on the main stage. That element consists of the catalyzation of an egalitarian but as yet unrealized dream: the holistic development of a spiritually, mentally and physically enlightened process of growth. Enlightened growth as the centre piece of daily life – and not as an accoutrement, something tacked-on to the impoverished daily grind of financial dependency, as it is today.

The true revolution is only possible once the external crudely physical and material regime which we all live under today, has succumbed to collapse; hastened on by warriors of truth. And simultaneously, the egalitarian urge for spiritual, mental and physical growth, is primed and ready to fill the vacuum created by this collapse.

It is only when these two elements come together, as if destiny had played its synchronistic hand, that the long longed for ‘new beginning’ can happen. That some strong seeds of a potential golden age can be planted into fertile soil. That which can redeem the status of human kind to something akin to humanness – and then to Godliness.

Are we approaching such a time?

Listen carefully: only if we take actions now. Actions fired by a deep intent to bring about a powerful sea-change in the way life is lived. That is the imperative. To set in motion a metamorphosis of daily levels of consciousness, and taking the actions that will put that new awareness into practical affect. Both.

Such a revolution spares no detail in its insistence upon uniting all the core needs of human kind:

material needs, medical needs, culinary needs, cultural needs, spiritual needs, artistic needs and the ecological needs of the planet upon which we live. Seeing all as completely interrelated and inseparable. Each one, in turn, a key to a collective flowering of planet Earth.

Not one of our genuine needs can be subordinated to the status of ‘lesser’ in the chain of interconnectivity that will grow into the first truly stable foundation, upon which the evolution of mankind’s higher aspirations and abilities can be built.

However, if the collapse happens – and no such preparedness to fill the vacuum is ready to come forward – then the chance is lost, maybe for a further 36,000 years.

And those able and relatively aware aspirants, who perfected their ‘asanas’, but failed to come forward to prepare the new ground, seeking instead false liberation through spiritual and sensual escapism, will surely suffer a rude awakening. Taking out such cosseted insurance policies will prove to be no guarantee that one will be saved from the agonies of a dying civilization, let alone headed for some higher dimensional salvation.

More likely, a protracted return and cleaning up the planet, a task ignored through preoccupation with more selfish concerns during this life time, will be the karmic retribution for those of us who were able, yet failed to take responsibility for the greater whole.

Our tragically trashed and uncared for planet and peoples are all too often ignored, even by those more than capable of acting responsibly – by putting their shoulders to the wheel of positive change. But instead, too many have shown a narcissistic leaning towards personal salvation which has all too frequently tainted their outlook on life and robbed the world of critically needed healers.

If the vacuum ‘after the fall’ is not quickly filled by eager and gifted individuals able and willing to take the helm, then we’re in for another kind of order to become established. A New World Order. ‘Order out of chaos’. The final capstone of the pyramid of top down total control; with its obsession for full spectrum dominance.

Yes my friends, unless we seize the opportunity to take charge of events in the critical window of opportunity now opening, we will have capitulated to the long planned for Satanic and fascistic complete take over of our planet Earth.

That, we cannot allow. Which is why the Great Revolution beckons, an ever brighter glint in the eye. An ever deeper sense of surety; of intent; of conviction. A growing fire of courage to face this unique challenge – and to come out as victors.

Nothing else is good enough … and yes, the time is fast approaching. That window of potential is already ajar. However, there is nobody else to open it further other than us.

It will not be those who get all exited about ‘the new age’, but lack any commitment or skills needed to make it happen. Not those who meditate their way to Nirvana and leave everyone else to stew in their own juice.

Not those who preach the sermon of change, but never leave the pulpit. Nor those who only move when their astrological sign tells them its OK to do so.

Not even those silky skinned,  perfect smiling toothpaste tube models of ‘perfect health’, who travel the World as part of the quasi spiritual circus that earns its bread and butter by getting up on a platform and selling the secret of ‘perfect happiness’.

No, none of these will be found breaking the new ground demanded by the coming time. Instead, they will no doubt be searching desperately for safe havens; someone, some place, to offer them shelter from the storm.

So who will come forward?

Ah yes, that is indeed the question. Am I to take the risk of proffering an answer? Well, since I’ve always been a risk taker, I guess I’ll have a go: those who came back to this planet specifically to take on this role, and who have not got lost along the way.

Accompanying them will be those who recognize and support genuine qualities of leadership. Who recognize leadership as being based on wisdom, conscious awareness, determination, compassion and the capacity to commit until a job is completed.

The first ever truly authentic revolution will not move through 360 degrees in just a few weeks, months or years. For those participating in it, it will appear timeless. And indeed, it will strike the chord of timelessness. But it will simultaneously be of this time and will be built of very real assets: vision, pragmatism, manual dexterity, knowledge and skill.

That is why it starts here and it starts now. Preparing the ground is the first action necessary in order to plant productive seeds. Fertility has to be rebuilt before such seeds can germinate. There is no other truth than this. Everyone reading this article knows this, deep in their hearts.

Those who act upon this knowledge, have the great privilege of being co-helsmen in fomenting the very first, truly authentic, pan planetary revolution. Ultimately leading to the emancipation of all mankind, and the final falling away of that which refuses participation.

Participation is this, the greatest collective quest to ever face mankind.

Julian Rose is a writer, pioneer ecological farmer, international activist and actor. His acclaimed book “In Defense of  Life” is available for purchase on www.julianrose.info Visit the site and find out more about Julian’s life and work.

View all posts by Julian →
This entry was posted on 7 July, 2016 in homepage and tagged Claire Palmer, Julian Rose, new revolution. Bookmark the permalink.