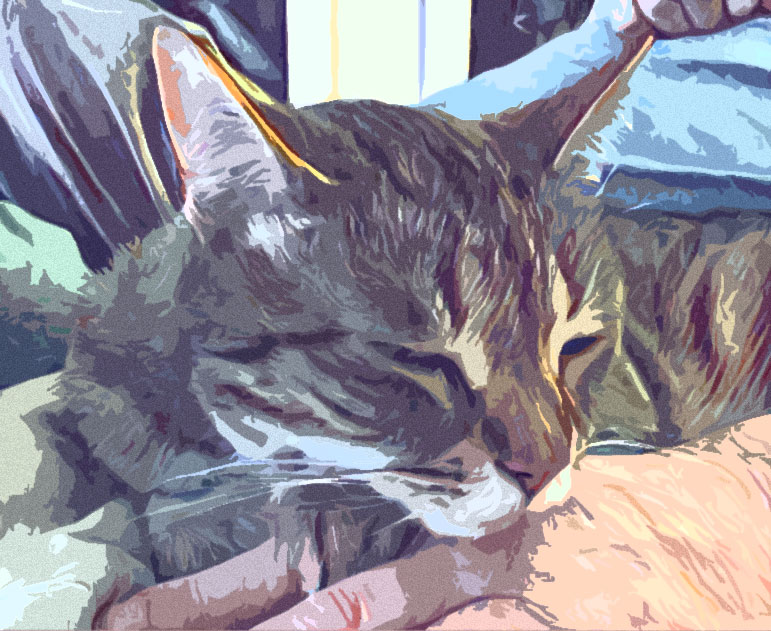 The earth goes rolling slowly towards her rest,
one monumental wave out of the cosmic sea,
bearing on its back the glory of its flotsam,
welcoming in its depths the wrecks, the jetsam;
it bears the small things, too, the Himalayas
and the fjords, detritus of back gardens and high-rise
offices; and cats, of course, the Persian, the Manx,
the Munchkin; wicked cats too, the meanest,
mangiest cat anchorites. Brother loved a cat,
one spiteful, big, self-ostracising cat, brother
adopted him, and he adopted brother. Cat
would hiss and spit against the world, with a
screechy sideways hop, his shabby coat
standing erect on his off-black high-arching
back, should you presume – while brother
struggled years with his own demons, grew skilled
in subterfuge but fought against himself
and won. Worn by long suffering, he learned
kindliness, grew skilled in ministering, was loved
for his hands-on healing. The cat (whom he named
Calvin) snuggled in to him and he hugged the cat
close against his breast. Calvin, he said, reminded him
of life’s bazaars, of spitfires, pantries, crab-apples,
wasps. When they laid my brother in his wooden box,
dressed in his pearl-pure chasuble and stole, they placed
a silver-fine small crucifix against his breast
and at his side, in a Nordic urn, they left the ashes
of his cat Calvin. In the cemetery in Pleasant Hill
we heard a purring sound as the casket-lowering device
laid them gently down together into eternity.

Tweet
Tweet
This entry was posted on 3 December, 2022 in homepage and tagged John F Deane. Bookmark the permalink.