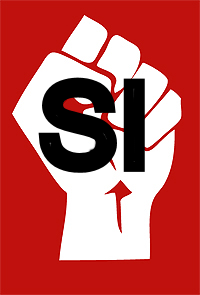 On Thursday the 5th Oct at Housman’s book shop Charles Radcliffe gave the first Chris Grey Memorial Lecture. He talked about the Situationist International (SI).
He said that most of the time he might have been accused of being SI he was on the run. This I can attest to. We had the Pirate Press and we had been putting out dollar bills. You would have been senseless to accept one, (wrong paper, colour, size etc but lest anyone think that we were counterfeiters we printed ‘IS THIS WORTH THE SLAUGHTER IN VIET NAM’ on the back. So they did us for forgery; worse, conspiracy to forge; carrying no maximum sentence. They did not charge me or Chris, the other partners. I think the lease was in Terry’s name and Charlie said that the printing press was in his name.  Charlie reckoned he was looking at two years and did a runner before they could charge him. Meanwhile Terry, who never seemed comfortable when he was not locked up or brewing some outrageous scheme to get locked up was doing his thing. He had founded the Eskimo Navy which harassed the Nuclear Submarine base in Holly Lock, organized the first mass invasion of a military air base at Wethersfield and, amongst many other actions arranged the occupation of the Greek embassy which destabilized the neo-Nazi Greek royal family. After a bit Terry had so charmed the Judiciary with his astounding grasp of Legal Process that they gave him bail. Charlie came out of the woodwork, where Chris had been keeping him safe and the only detail left unresolved was the trial at the Old Bailey.
Whilst on the run, Charlie had been expelled from the SI. “What was the procedure for expulsion?” asked a perceptive member of the audience. Charlie not having the heart to tell the questioner the truth finally squeezed out that maybe Guy Debord called you a cunt. So they started to ask him how you became a member. “Party card, blood oath or what?” This had Charlie stumped. He was again forced to mutter the unvarnished truth. “Chris knew how to talk French and a lot about Marx.” Charley does not talk about Situationism. “You can’t have an …ism without an …ology and there is certainly no Situationology,” he offered with a grim smile.

The SI, he observed, never took action and was scarcely worthy to be described as a revolutionary group; all they did was expel each other. (I never saw a trace of them at the barricades in Paris in ’68.) Guy Debord emerged as a demented genius. His obsession with expulsions left the SI with one member who he could not expel as there would have been nothing left to expel him from. Then there was the case of a prominent French intellectual who was received into the fold simply in order to expel him.

Despite the brilliance of post war French intellectual life, (De Beauvoir published The Second Sex in ’49), by the Sixties France was an intellectual backwater, pathetic at rock music, and without a counterculture. At the same time in London we were printing the dollar bills on the same press as printed the critical Issue 10.5 of IT which gave the hard left control of the paper. Debord saw the English SI as a stepping stone to the States. His expulsion of the English and American SI was no more aberrant than Hitler’s invasion of Russia or the obsession of the World’s Great Powers to seek military humiliation at the hands of the Afghans.

Charlie did not discuss the, still not fully developed, psychological aspects of the SI. He referred to this theoretical current as the personal, the spiritual, aspects of revolution. He pointed out that Chris’ two major works, “On Leaving the Twentieth Century” and the “Acid Diaries” straddled the territory.  That seemed to me to be a worthwhile thing to have said; clever enough to explain how a man who freely admits he is not an expert Marxist, and who would be content to be known as a retired blockade runner, was accepted into the councils of the Situationist International.

It was all so normal before it became History. It was all so normal whilst it was going on. Yet sanding on the pavement outside Housman’s having a smoke with Charlie it was as if we were aliens or had been marked in some indelible way by the march to a different drum. I can understand why people want to know what it was like then because then we were only interested in now.