CLOSE TO KABBALAH: A Phtotopoem walk in search of Rabbi Falk 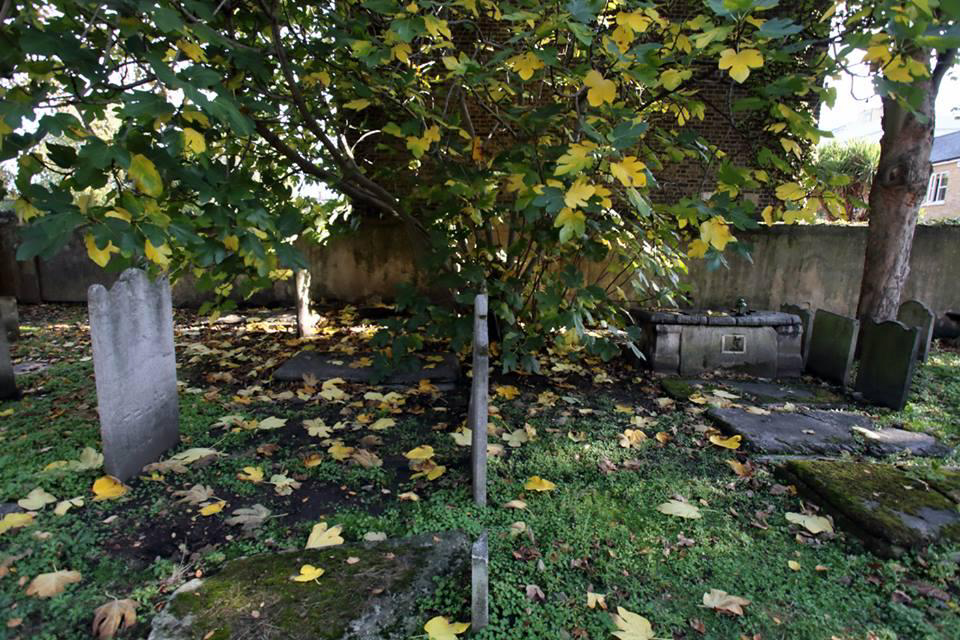 And so the week starts with death, a Monday morning tramp to the sacred,
In praise of Rabbi Falk, the Kabbalist, a cabal of Max Reeves,myself and Max’s friend,
Anthony; all here to examine the land Dr Dee’s lost successor, a consort to no court
But purveyor of something beyond history. Baal Shem Rabbi Falk, the spell king,
And retainer of flame in spent candles, former Swedenborg Neighbour,
Falk once had a broken wheel follow him. Now we follow on in his rest amidst his
And other ruined tombs, their stones squandered, split by time, or by Golems, 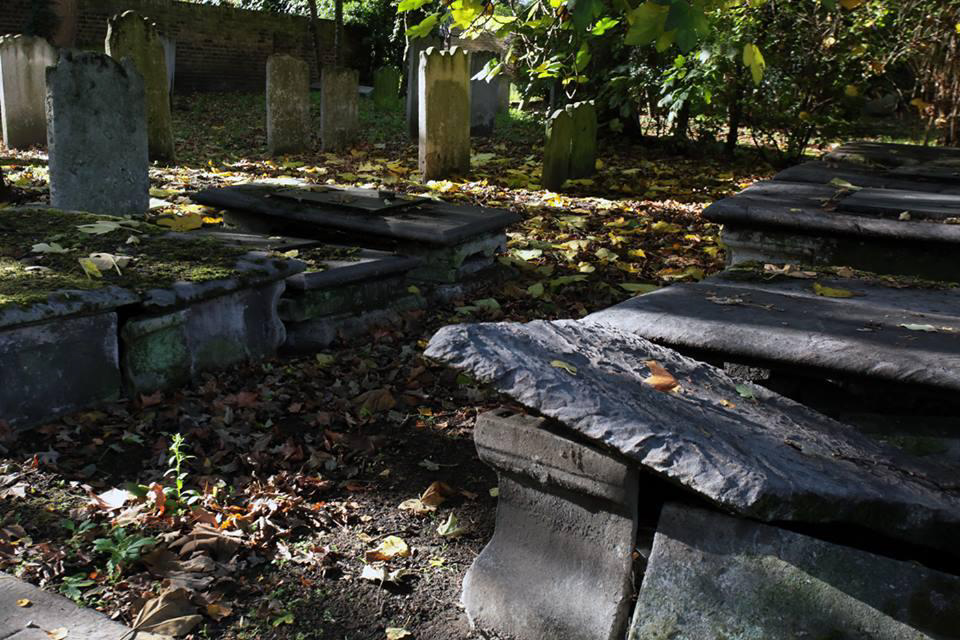 Who, wearied of their work, became djinns. On a sunlit day, sharp with cold,
The divisions of death become central, with these hidden Jewish cemetaries
Their own Torahs, the vanished bones as words written in Hebrew, weeds and dream
In Talmud. The scented earth grips the shoe, like a Rabbi’s hand in advisement,
Keen to make his point, lost eyes glaring with his knowledge and tears through thought flood.
Stones are tears for the jews, the alchemic change grief imposes, placed on a grave
In the present, a requiem is revived. Falk’s Kabbalah cries on entombed,

By a weeping age stone encrusted, his legacy awaits congress with fresh kisses of earth
And mud tongues. The small box at the head of where Rabbi Sack’s claims fresh glory,
Shows how a small man can still command history. His magic totem in death becomes
The prize we’d prise open; Max with his camera, and I with this poetry. Since 1782 Falk has lain,
And now his tomb is organic, as much of a tree as that by it, as much of the ground as our stare.
The splits in stone show escape, as a Golem might after conjure, or if not escape then
Encasement in these semitic fields sown from care.

These places are the palaces to the kings who never fully prescribed their own kingdoms.
A Priest’s role is guidance and an ushering towards God. Sacks’ internment shows this, 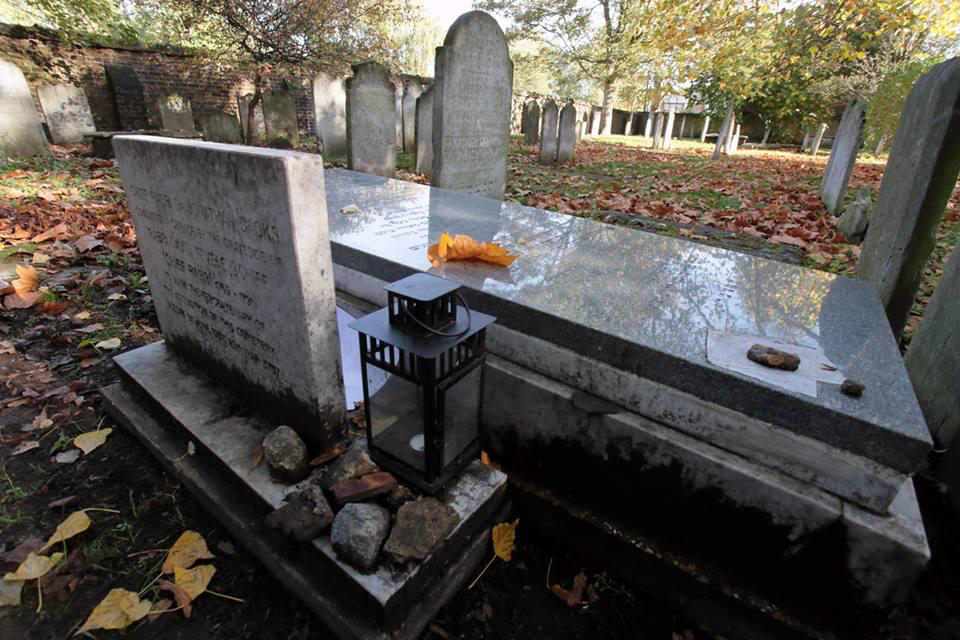 Praised as he is and attended, and as we watched, an old Rabbi offered blessing
And truth where we trod. We attended this graves, much like a hospital visit,
Stepping with care around patients, whose stone Golem gaze fused with mud.
On Falk’s stone, a lost plaque with a face of moss achieves picture. Dog like,
It guards him, a cartoon in death for past life. 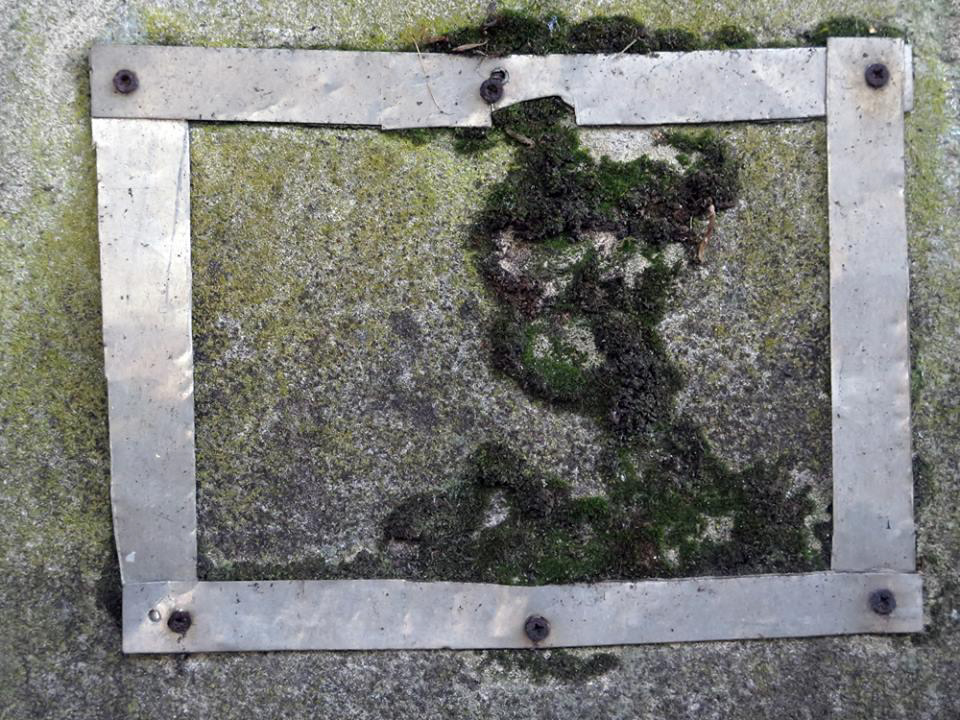 We are all images. This is what a photograph shows us; the bright content of a moment
That in passing on, makes all ghost. Whether in reflection or breath, we are only exposed
As light finds us, and too soon returned to the darkness that this time team of Rabbis
Truly understand and hold close. If death brings despair then a graveyard gallery brightens,
Framed as they are across seasons, these plots for ascension become portraits of life,
Not of loss. The proof of magic subsumed, but magic all the same, leasing lesson;
And location too for the progress and pattern of belief beyond cost. 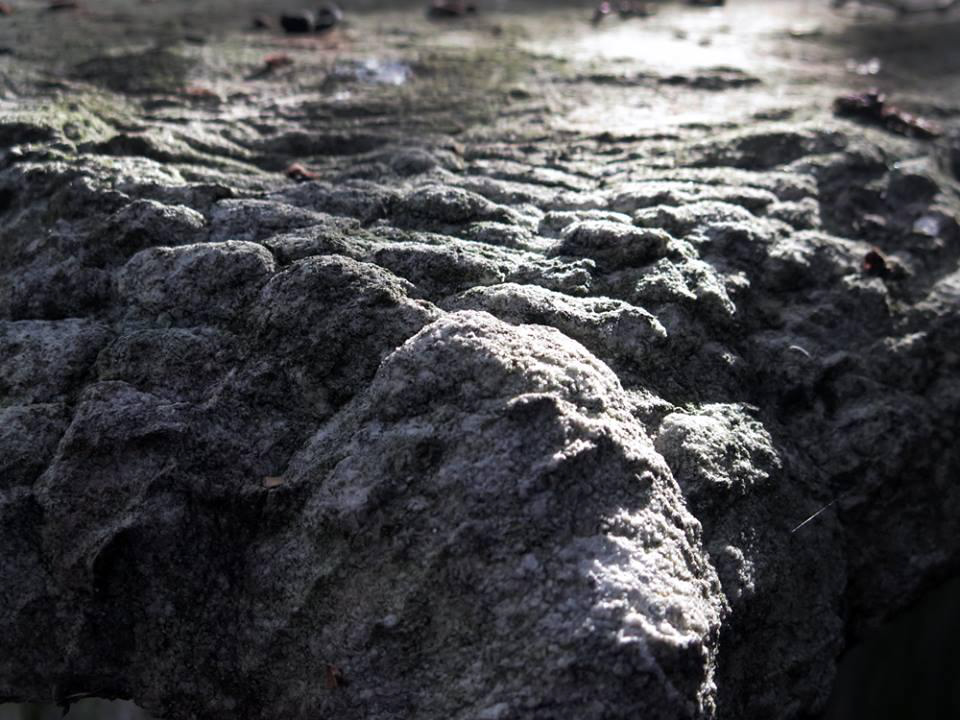 Here is where light plays on tears, which their stone like form captures, Here is stone as man, and here; paper, the parchment of old, now unfurled. 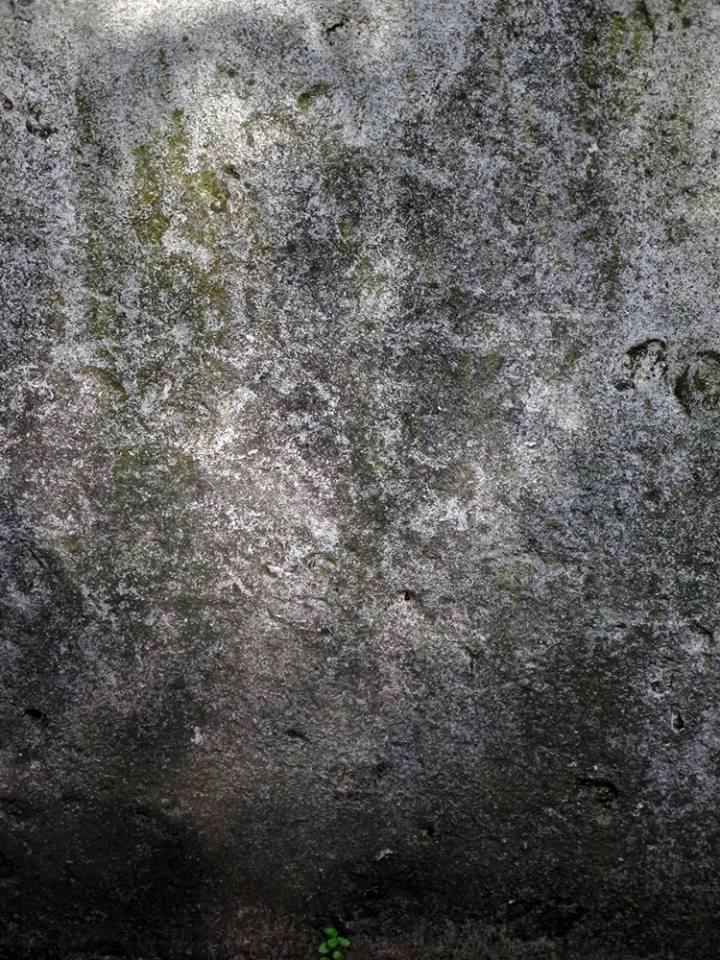 Grief on a leaf, as if kissing the head of the sundered, who in surrender
Ably represents our lost world. In severing ties with our faith or what faith is for,
Our estrangement between the proper enchantments of worship and the former
Mysteries time once held, are evidenced in the way we create each day a new ruin
That these former deified souls once walled over; before they became stone themselves.
Observance was key to a once world of wonder; something more than
Obedience; better than unquestioning faith; reasoned views that took in the natural world 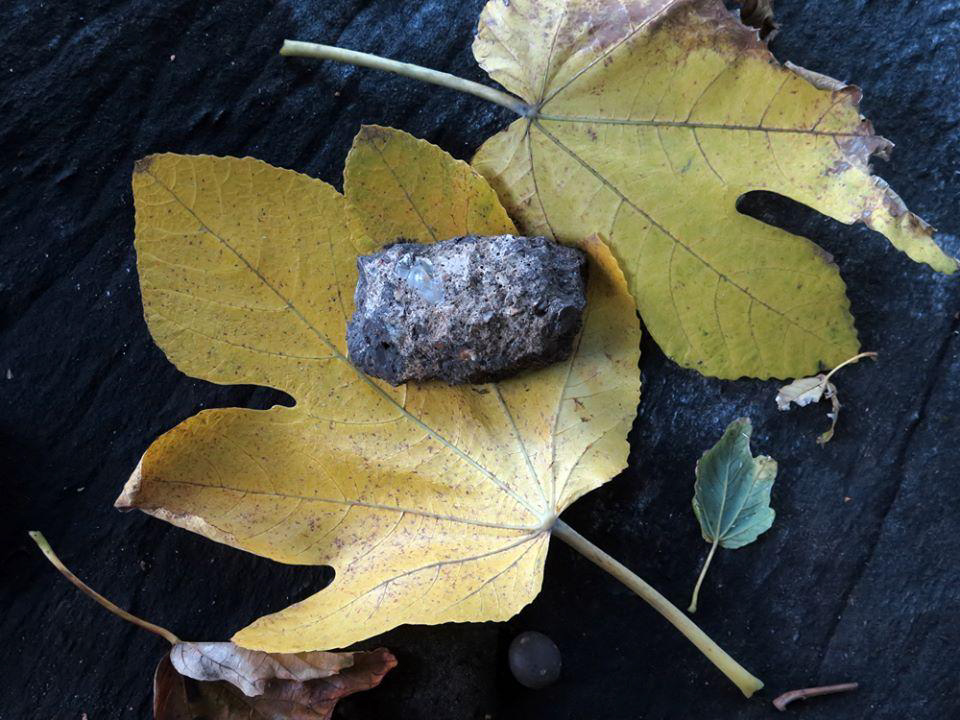 And then that far other. And now their broken homes reveal passage
To the unknown air is still news. Here, the rank and file find fresh form,
Their tilt and fall feels like talking, as if the spirits commune with each other,
Dovening no doubt, in this light. Various generations of men, each with a Jerusalem
On their conscience, but blessedly unconnected with the current violence

Of practise and the wounded thought in the fight. Sunlight kisses them,
As their kissed their books and Tefillin, as they wound the threads round them,
Our fascination too is applied to the limits of life as it was, as presumed by the now 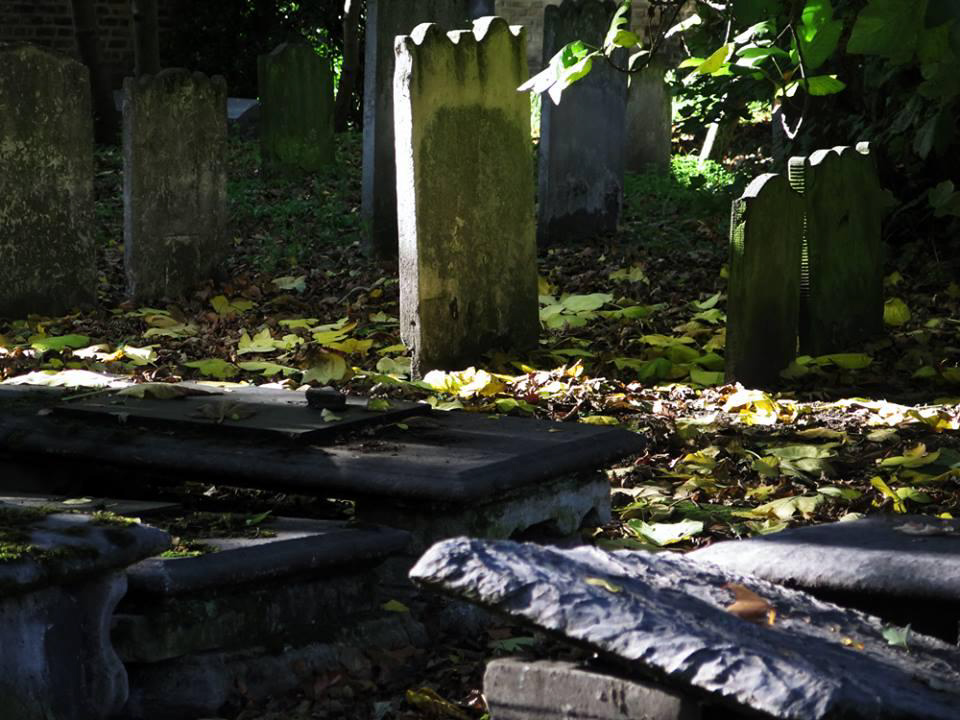 Before showing that Falk’s own occult vision, wrapped in its Kabbalah cloud 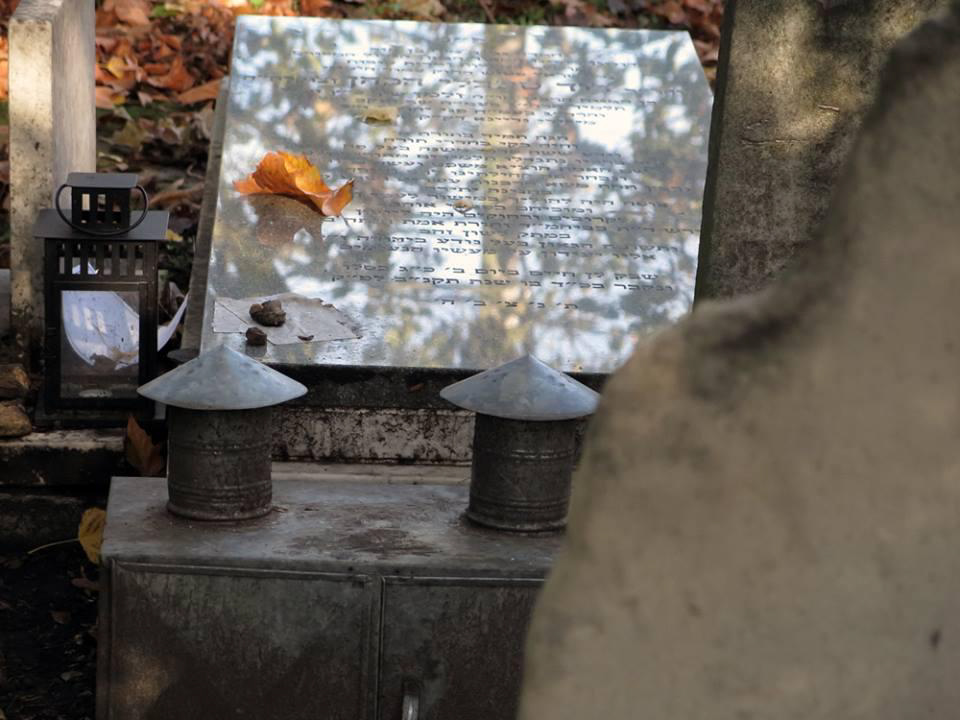 Duly thrived. Here are prayers kissed by light with an attendant stone congregation,
Here are lanterns and stone seas leading away to kept shores, 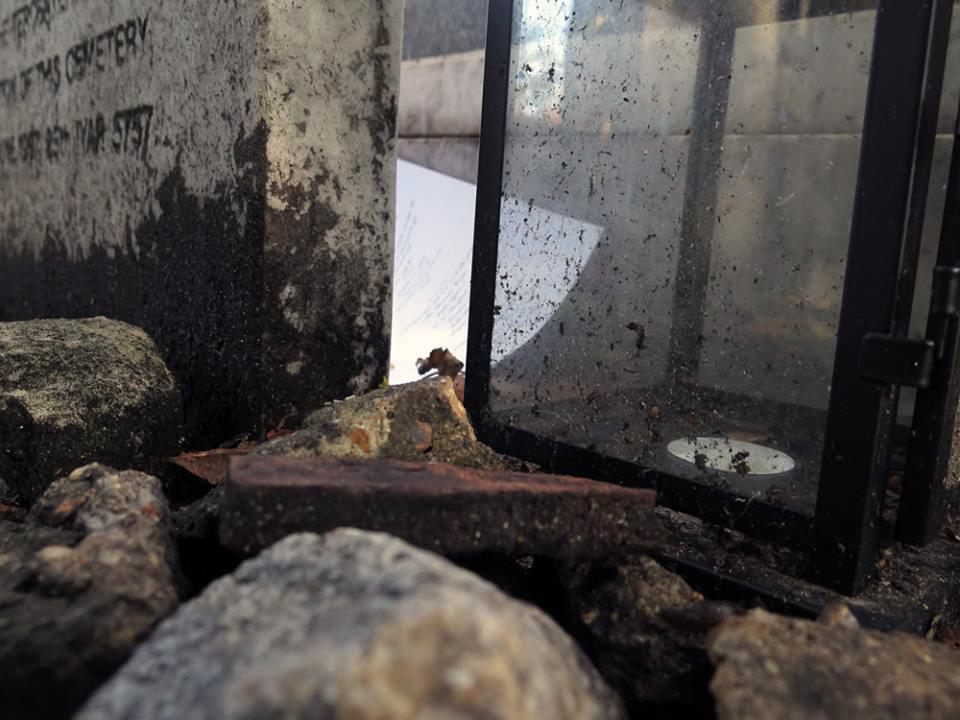 A ghostly scream in the stone, a portal or mouth bidding entrance,
Or the expulsion of exit as the spirit of Falk still implores.
Reeves’ a non jew, produces an active engagement, a direct conversation
With these organs and bursts of the past. His camera catches all,
From stare and stones to stained pavement, the lens now a gateway
In which Golems and ghosts can be cast. It is thrilling to see that Cemetaries
Remain living, ransacked by time they still clatter with all of the life they contain. 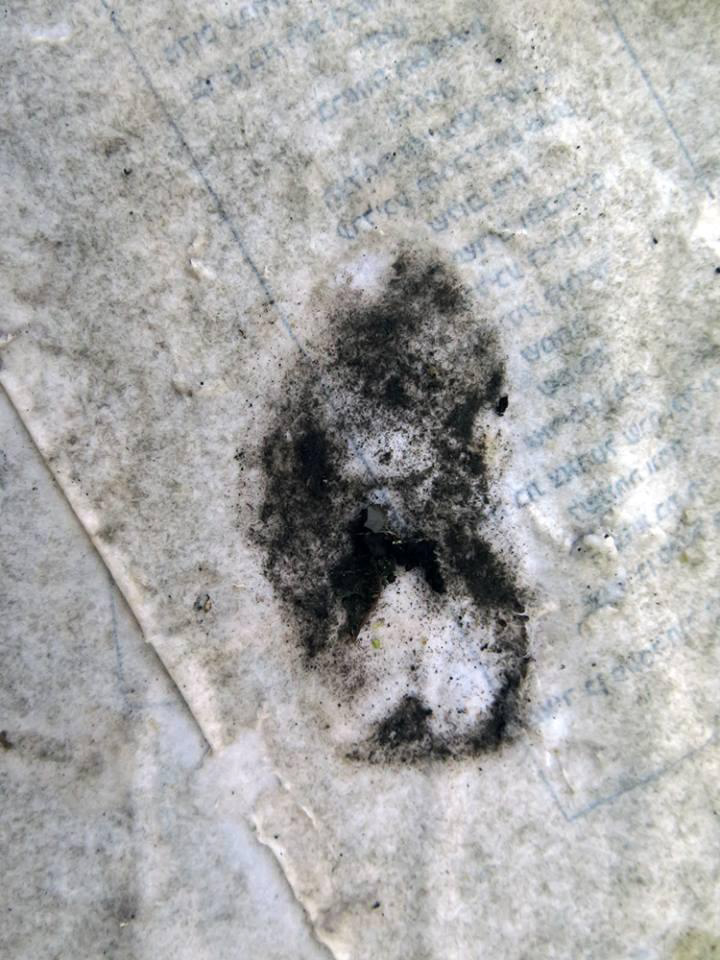 Shamans of air, Alchemists of intention. Benign Necromancers, Rabbis and Priests,
Binding age. Time becomes its own book as our memories turn tropes and pages,
Visiting such sights joins us to those we have no proper experience of.
No connection apart from the need to learn from them, they whose past
Conjurations merge with our own to know God. A man and wife lean and learn. Or perhaps son and father. Touched by light,
Falks has joined them, he who was once only ascribed to the dark. 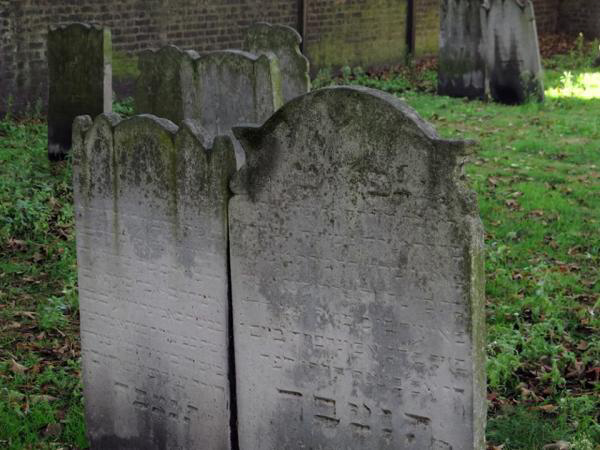 And yet peace finds this place. In Stepney Green, life’s full colour,
Evidenced by the witness of the peopled stones and tree bark. 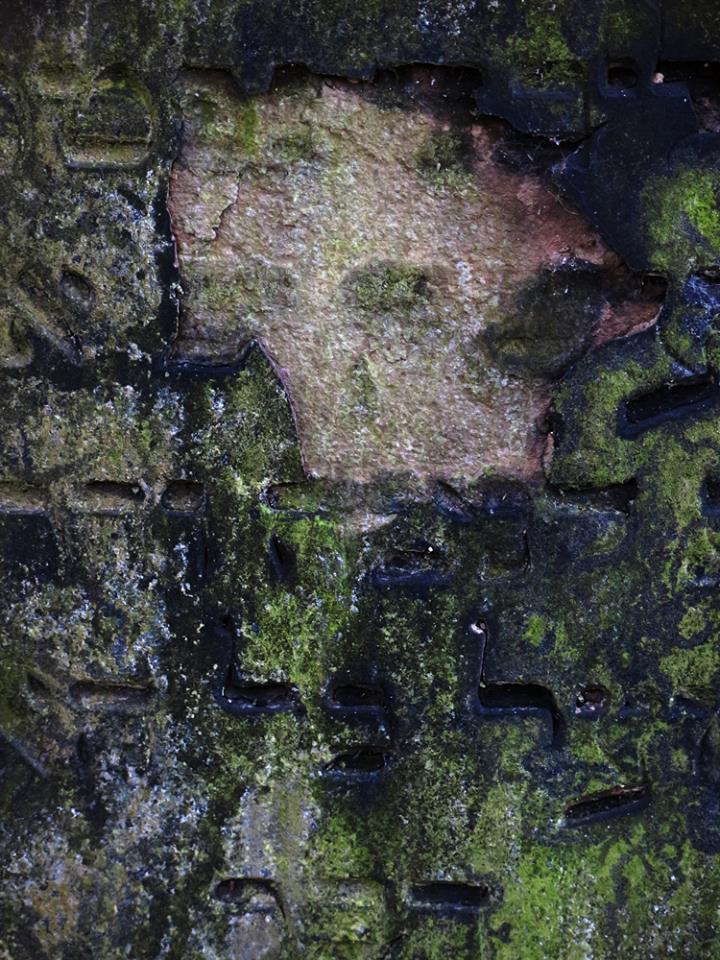 Arrows eat into word, the Hebrew script crenellating across tree and headstone,
Making each mineral. Alderney Road as one place where the Golems of folklore
Take root and witness, and make everything here, animal. Human. Weed. Stone. 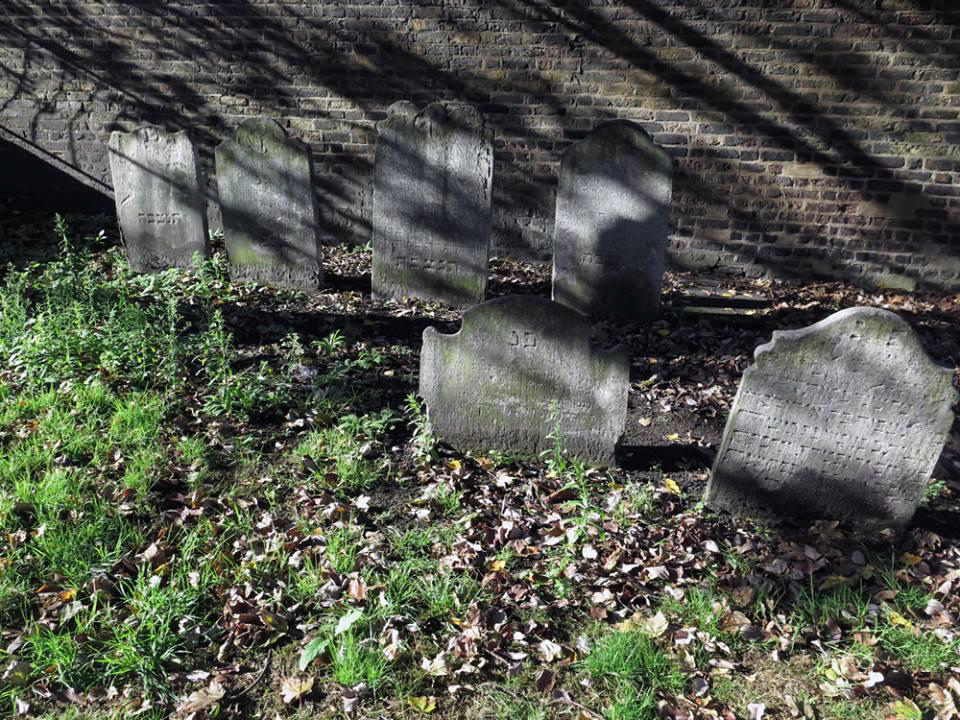 Shadow and light, movement, focus; the influence of a leader whose transmogrification
Resounds, within the breeze and the breath held by the ever tapering branches And the light that shines from old London to the one we have now, with a kiss. 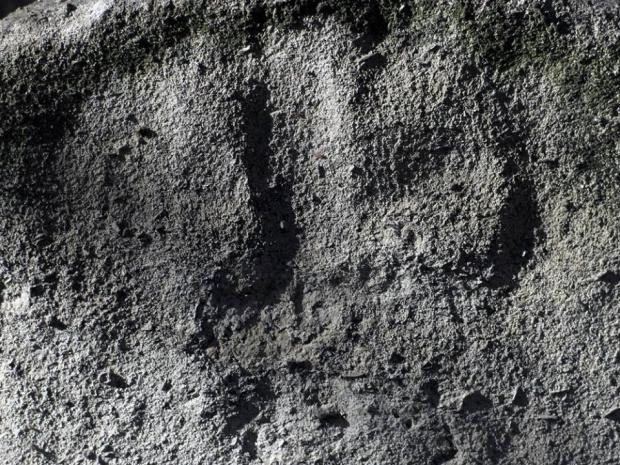 Hands in the brick work and means to return from the ‘other’
Reveal how the border between the mystic and real seals all realms. 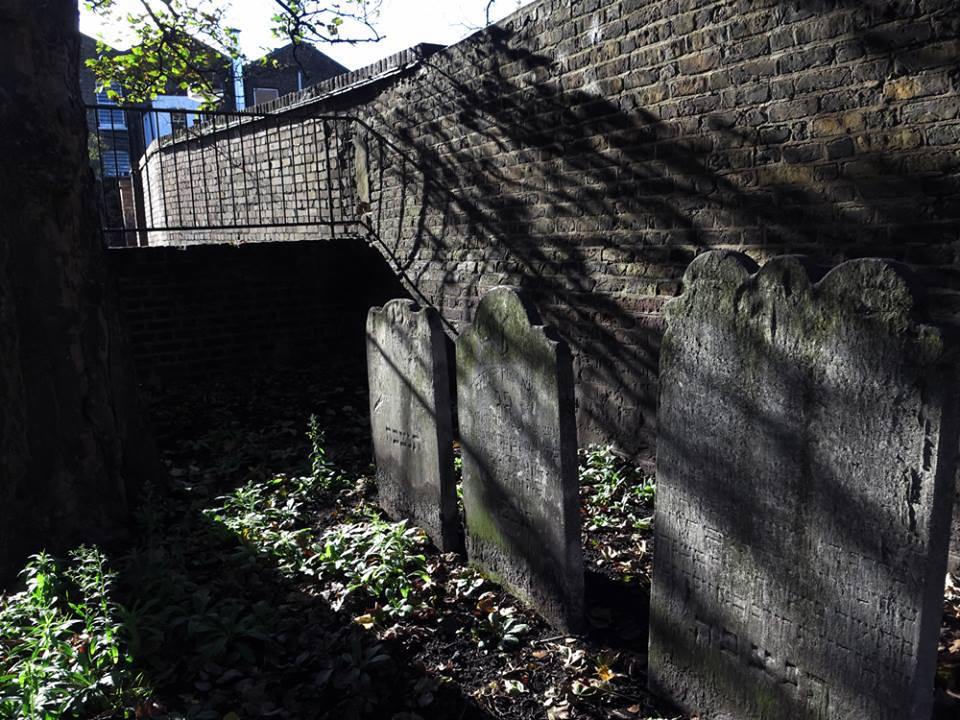 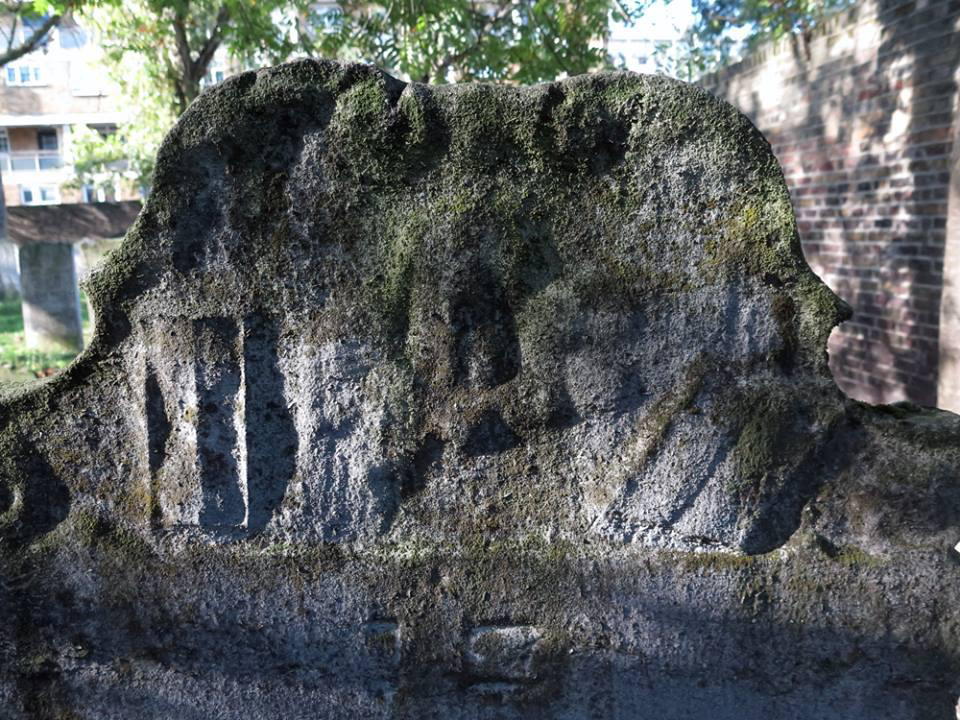 Faces too, stare at us, as eye and hand combine to show favour,
As if we in witnessing were their subject, and this scrutiny through the stone overwhelms.
The separate ages both here, a result of Falk and his magic; the Kabbalah’s call
Through time’s passage banishing the self centred fears of the lone.
In Alderney Road then the star, the rose, the sacred rose of endeavour,

Forged by Rabbi Falk in bright effort that gathered itself from the cloud.
The Graveyard gallery found in a forgotten seam in lost London.
Street pockets of death from old tunics, forged from priestly robes On old thrones. A configuration of stones, like a badge, 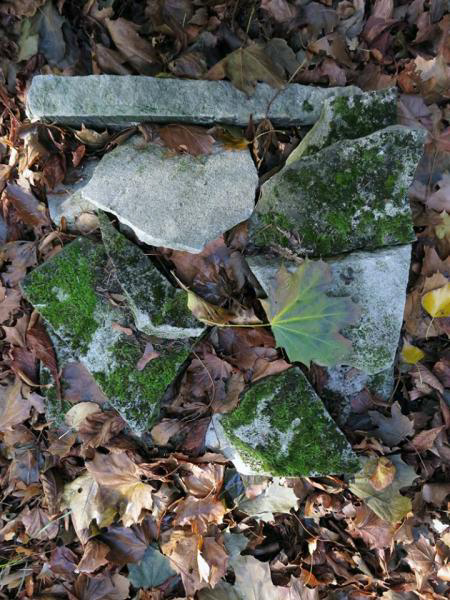 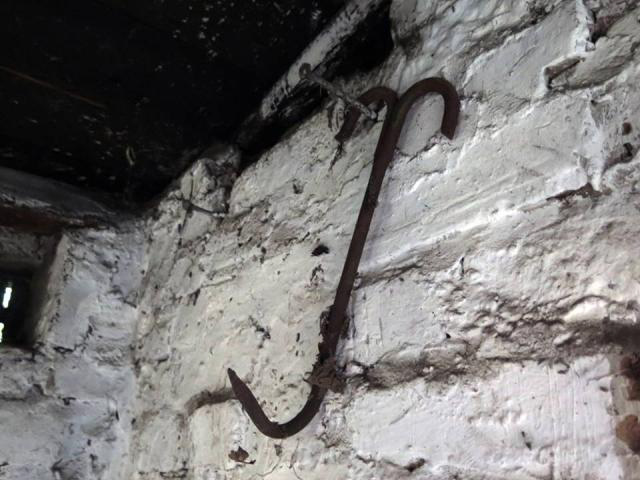 And a dissection hook, as an emblem of that particular time speaks of horrors
And previously heard messages; these at least can be felt as we walk this tight tomb space,
Taking in the lost markings, while searching perhaps for truth’s face.
Which is not a person, o f course. The truth is in the wind and its flavour.
It is in the break of light and the fervour with what we would understand all that was.
It is part of the fight and the flame, the care and concern, the old quarter
That makes us whole when considering the price we have paid, that vast loss.
We gave up our ghosts. Now these shattered stones reveal flourish.
They did not entomb the transcended by simply became chrysalis
For the vanquished spirit to rise and to walk a jewish dream through spent suburbs, 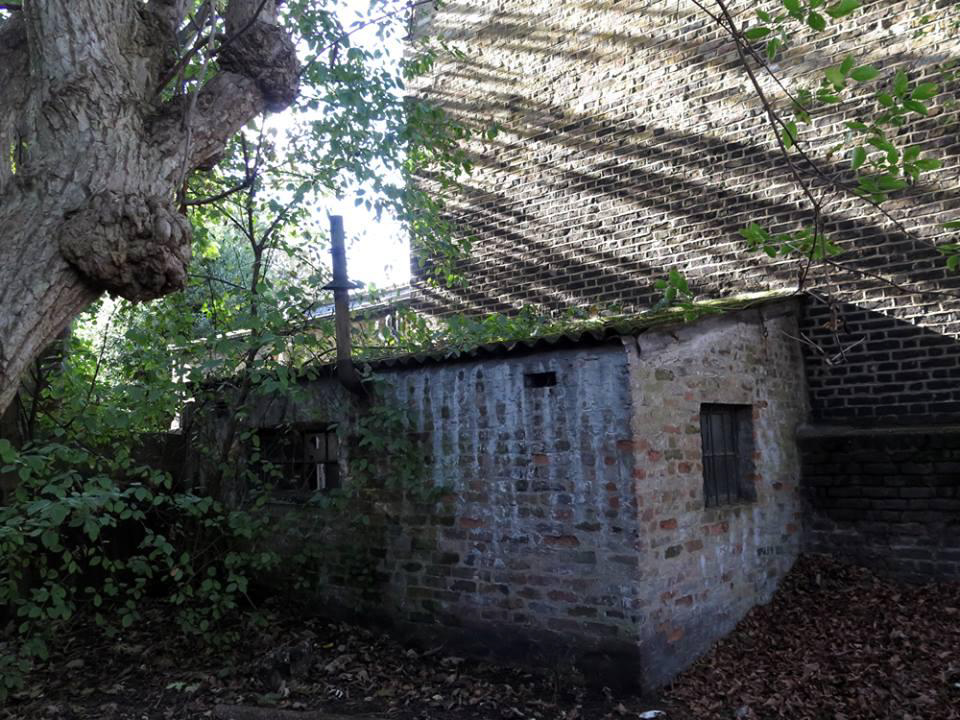 Speaking of a time when ascendance was part of a day made for bliss.
All the while in the wrack and the ghosted house by death’s garden,
A sense of visitation endorses the mirrored time we have echoed
And the sacred rhyme rising from Rabbi Falks giving silence the voice it has sought
All along. If we could listen to that, we would become the new Golems,
Freshly gifted with purpose and the miracle made from time’s song.

To the Cemetary we came to find the Kabbalah King resting.
Just three in number, there in an infinite spread, we belong. 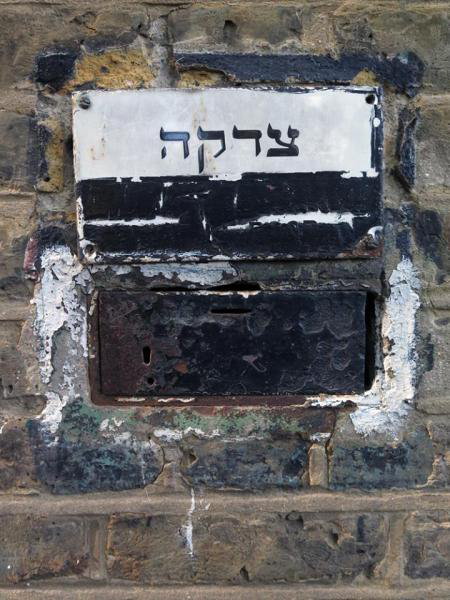 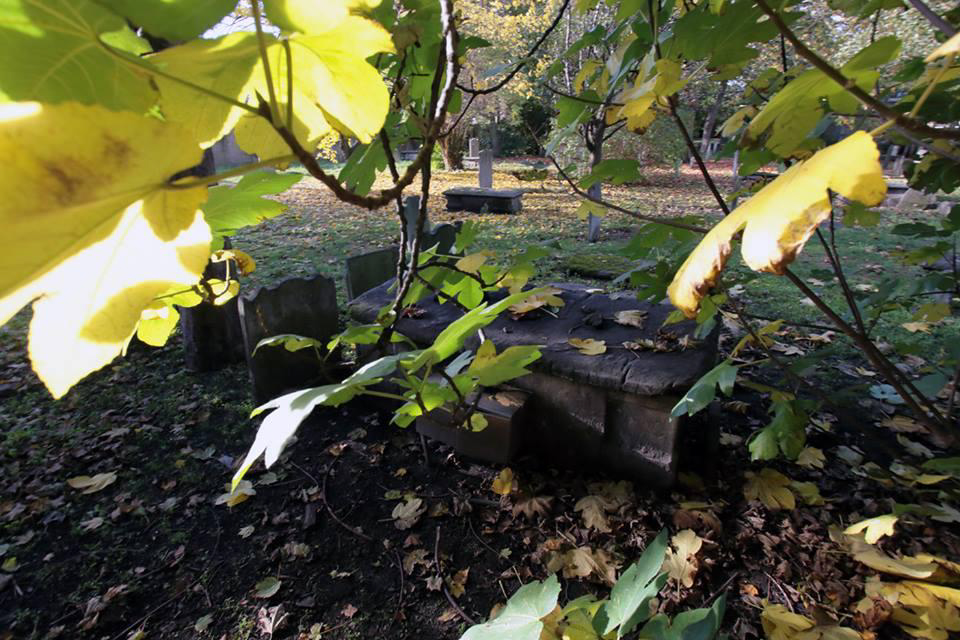 View all posts by David →
This entry was posted on 10 November, 2018 in homepage. Bookmark the permalink.