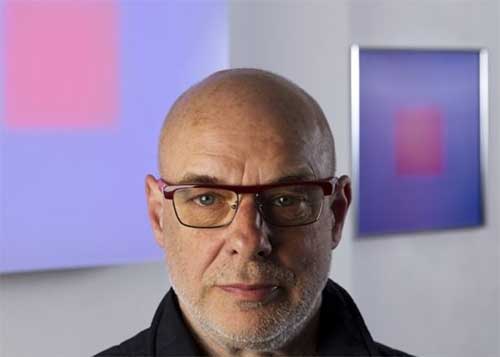 Brian Eno is talking to 700 people in the British Library foyer about complexity from simplicity. It’s a strange launch event for his new box set, an hour lecture embedded within a playback that is literally just that, music being played through a good sound system for those who are attending, plus a bar and pop-up enoshop selling everything by Eno except the new box set.

Eno is jocular, friendly and seemingly unrehearsed as he speaks, although this doesn’t mean he’s inarticulate or hesitant. He takes us back to his early solo music and explains how various loops interacting produce years and years of music that never repeats itself. He shows us a single pendulum and then a double pendulum, noting how the latter is unpredictable and interesting, despite its simplicity of form. He talks about how music has always been visual to him, and shows on the display screen behind him one of the early photos of him at art school which is in the book Brian Eno. Visual Music, claiming it shows his first visual music event. He says there was a moment when art and music came back together for him, and which has informed his creativity since. He gets members of the audience to switch on several boomboxs around the foyer and listen to the music being made, saying we will never hear it again.

So far so good but then, for me, Eno blows it. He says he wants music to be accessible (I think he used the word ‘nice’ but a friend disagrees), and that it is an artist’s fault if no one likes it or understands it, citing the improvising guitarist Derek Bailey as a personal problem for him despite many years of listening. Now, I understand this, it’s taken me at least 20 years to start to be able to understand Bailey’s wayward guitar playing, but that seems like my inability not Bailey’s problem; and besides, no one is making Eno or me listen to the music. Accessible music to me will lead to lowest common denominator pop or new-age muzak, the latter being something Eno has been blamed for anyway, though he has resisted the association. His Nerve Net Sampler CD back in1992 had a sticker on with this brief conversation printed on it:

DETAILS: Do you accept partial blame for new-age music?

BRIAN ENO: Yes. But I don’t accept any blame whatsoever for
new-age philosophy. 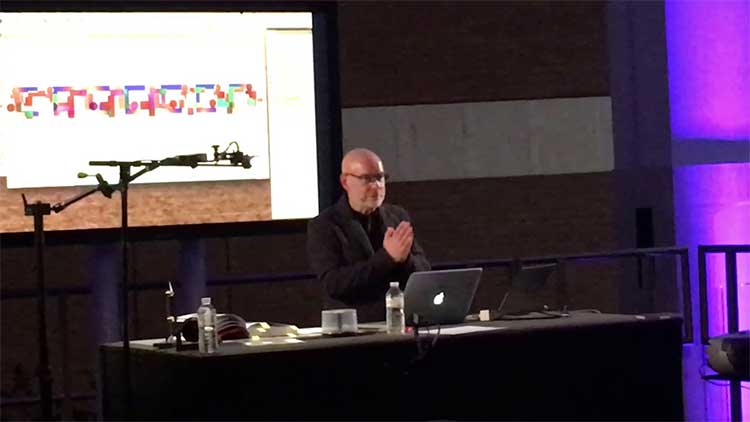 This is fair enough, but wanting everything nice and immediately accessible doesn’t seem a positive step forward, especially in the light of the often strangely plastic tones Eno uses in his music the moment, or the fact that his video art and music are often incredibly slow-changing, indeed sometimes almost static, and require the viewer/listener to spend time engaging with the work.

Anyway, contradictions apart, what have we got in the box? Six CDs of recordings made between 1985 and 2017, along with a new Eno essay, beautifully packaged and presented, as is the 9 LP box set and – no-doubt – the superduper deluxe limited edition box which comes with an ‘individually numbered Plexiglass cover book’.

Despite claims by both the artist and record company, much of this music has been available before, usually in limited edition CDs  that could be bought at the exhibitions concerned, direct from enoshop online, or at places like the Hayward Gallery in London, which is where most of my copies came from. And a fair amount of the rest has been easy to find online for many years.

The first CD contains four unheard of tracks, however, three from 2017 and one from 1985. Interestingly enough, there’s little sense of  the years between them here, they all sound very similar in tone and the space around the music – which is reminiscent of Bloom (at least on my settings), although ‘Five Light Paintings’ has a slightly unnerving and ominous textural layer happening very far back in the mix.

Next up are two CDs combining three previously released albums, Lightness – Music for the Marble Place, I Dormienti and Kite Music. They all contain long slow drifting tracks of ambient music, whilst 77 Million Paintings is an hour long CD of music associated with the computer programme of the same name, which layers a large but finite number of images into a potentially infinite number of new images. The music here is slower and more stately, more complex, but sometimes more fluid and dronelike. ‘I Dormienti’ is probably the most complex sounding and also the CD I’ve previously listened to the least. For me, it’s too busy and cluttered.

Making Space, which is the title of the fifth CD is also new to me, despite being previously available in 2010 (I must have missed that one!). Nine tracks, the first of which – ‘Needle Click’ – starts with an echoing rhythm and then layers synths over the top. It’s reminiscent of Tangerine Dream (that’s not a criticism), but the mood quickly changes with tracks two and three, both focussed on wandering piano but the latter distinguished with scratchy tones that circle around like an annoying wasp. The tracks here don’t sit together all that well as an ‘album’ and feel mostly like short notes or demos that could be extended or built upon, but it certainly stands out on first play through the box. This CD offers a varied and intriguing collection of work.

Music for Future Installations is the final disc, and contains four lengthy, drifting tracks which have not yet been used for installations, but possibly might be. One of the interesting things about this endless permutation is the contradiction involved in isolating and freezing, choosing and editing a sample from these processes. Eno seems to want to be in charge of his music as much as not-in-charge, wants to control and also not control, to be a systems designer but also a composer.

Music for Installations is a beautiful set of work, but I can also see why sometimes critics long for Eno to sing again (yes, I know he did on The Ship album recently), or even join Roxy Music and break up Ferry & co.’s pop blandness there with some suitable squelchy synthesizer and sound effects. It’s not going to happen though. Eno is as quiet and enigmatic as ever, evidenced by the way he quietly said goodnight at the British Library and disappeared within seconds, leaving only another hour of playback for any remaining enthusiasts. Most of the audience however, myself included, headed for the tube. 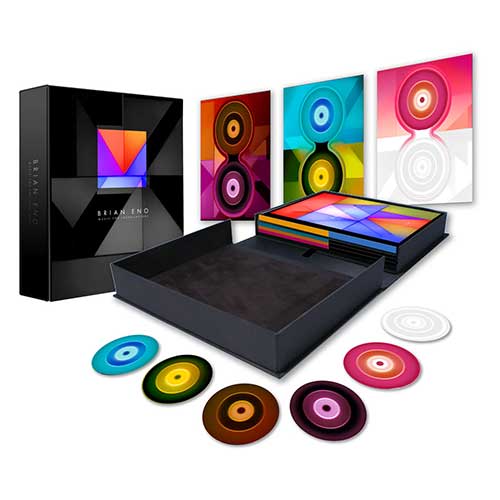 View all posts by Rupert →
This entry was posted on 11 April, 2018 in homepage and tagged Brian Eno, Complexity from Simplicity, Music for Installations, Rupert Loydell. Bookmark the permalink.