The Jurassic Coast Heritage Site at Charmouth is,

According to the UK Fossil Collecting Network,

“One of the most famous and most popular Jurassic locations

In the world, yielding plenty of fossils for the thousands

That come collecting every year”.

It’s certainly true that when you visit the site,

And endeavour to walk across the visible length of its shore line,

Seemingly conspire to block your path at every step,

Almost as if they’re afraid you’ll find something unique;

Given the easy availability of ammonite fossils (and little else),

Their concerns are justified:

The not-so-simple ammonite is a ubiquitous thing.

Was a fossilised ammonite, sutured and polished,

Dazzling to behold, as it whizzed through the Mediterranean air.

The word itself derives from Ammon,  originally an Ethiopian or Libyan divinity,

Whose worship spread across Egypt, the northern coast of Africa,

And even parts of Greece.

His Egyptian name was Ammun, and he was known as Amon to the Hebrews,

He was represented as a ram, or as a man with the head of a ram,

Or a man with the horns of a ram. 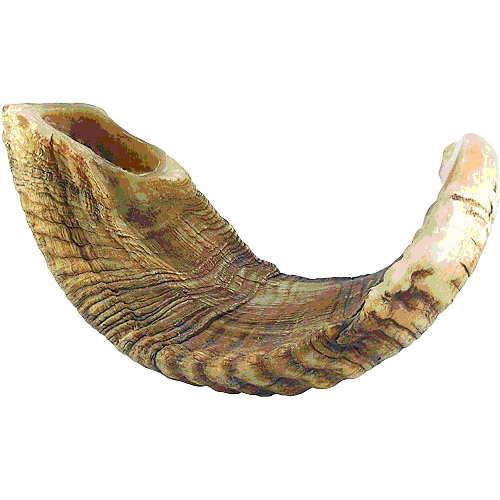 The curved, segmented shape of a ram’s horn resembles the

Ribbed, spiral-formed shell of an ammonite, which once comprised

In the large open-ended living chamber, or head chamber.

As it grew, so the remaining chambers developed,

Linked by a small tube; and these subsequent chambers contained gasses,

Thereby enabling the ammonite to regulate its buoyancy in the water.

From the aperture of the head chamber, tentacles emerged,

To catch molluscs, fish, and even other cephalopods,

Which happened to be in the wrong place at the wrong time,

The ammonite’s powerful jaws –  located between the eyes,

And at the base of the tentacles – were strong enough

To crack, crunch and gnash whatever came their way. 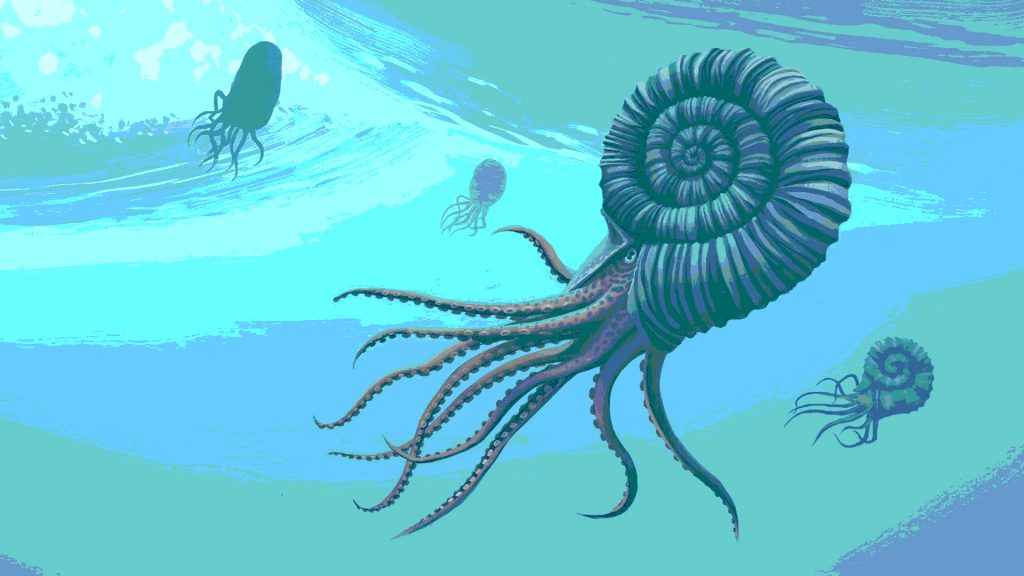 Females (macroconch) were up to four hundred times larger

Than males (microconch) – an indication, perhaps,

That Nature was indeed of a matriarchal disposition –

And the largest fossil ever discovered (and validated),

Measures six and a half feet in diameter:

Not the kind of thing you’re likely to stumble across

On the beach at Charmouth.

After fitfully surviving for four hundred and ten million years,

From the Devonian Period, and into the Permian and the Triassic,

Ammonites were finally wiped out, along with the dinosaurs,

And three-quarters of all plant and animal species on Earth,

By the Cretaceous-Paleogene Extinction Event (K-Pg),

These days, all that remain are remains,

And strewn across all parts of the planet.

However, these prolific sea creatures of aeons ago,

That moved together, in schools, through waters

Than anything which now inhabits our oceans,

Have become not just collectors’ items, catalogued via age, species and size,

By amateur and professional paleontologists alike,

But costly bling and mumbo-jumbo accessories,

To suspend disbelief, in a desperate quest for some sort of meaning,

Above and beyond the stark reality that fossilised cephalopods

Are no more nor less than what they actually are:

Long-dead remnants and reminders of a prehysterical pre-history.

In what is now North America, the Blackfoot called ammonites insikim,

Or buffalo stones, since they looked like sleeping buffalo.

In medieval Europe, they were called snakestones (and in England,

Serpentstones), because they resembled sleeping snakes.

Indeed, according to legend, they were actually petrified snakes,

Turned to stone by Saint Hilda of Whitby, and Whitby’s shield

Is decorated with three ammonites, each one topped by a snake’s head.

In the Western Isles of Scotland, they’re known as crampstones,

And they were once used to cure cramp in cows, while in Germany,

They’re called dragon stones, and were placed in milk pails, to revive cows. Strangest of all, perhaps, is the Northern Indian belief that ammonites

Are a direct link to Lord Vishnu, the divinity of absolute completeness.

Found in the valley of the Gandaki River in Nepal,

They’re called Saligrams, and one of Vishnu’s avatars, or incarnations,

Indicating the eight-fold path of deliverance.

Fossilised stone ammonites are kept in temples, monasteries and households.

Saligrams are also used in marriages, funerals and house-warmings,

As natural symbols of Vishnu.

Dating back to the second century BCE.

These days, depending on the gullibility of the customer,

Ammonites are far from priceless: in fact they can be purchased

For as little as a few pounds each, but rarely by would-be paleontologists.

Most, it seems, are bought as pieces of jewellery, in ammolite form, 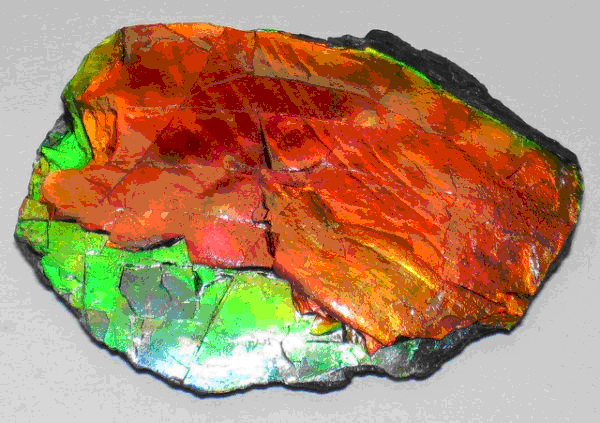 Although first used for commercial jewellery in the nineteen sixties,

It wasn’t until nineteen eighty-one that ammolite was recognised

As an organic gemstone by the Coloured Stones Commission

Of the World Jewellery Confederation (CIBJO).

Since then, its popularity, along with its price, has soared.

It’s not difficult to understand why, since, aesthetically,

In terms of both its iridescence and chromatic shift.

However, since the Korite Ammolite mine in Alberta, Canada,

Supplies ninety per cent of the world’s gem-quality stones,

And, as such, operates along the lines of a Mafia cartel,

The cost of individual pieces is staggeringly high.

Ranging from two hundred and fifty dollars for a small pendant,

To seven thousand dollars for a set of earrings,

It’s not the kind of thing casual buyers are likely to purchase,

As they browse in the shops and museums at Lyme Regis.

The fact that every piece is, essentially, nothing more

Than the fossilised remains of an extinct mollusc,

Would appear to be beside the point, especially for those

With deep pockets and shallow perceptions.

There’s a certain phrase from Proverbs 21:20, in the King James Bible –

“A fool and his money are soon parted.”

Not that foolishness is the prerogative of the preening consumer.

The website, Crystals and their Healing Properties, states that –

According to Feng Shui masters –  “ammonite is the seven colour

Prosperity stone; it stimulates the lifeforce – the qi – through the body;

Health, wealth, vitality and happiness; when worn, ammolite will impart

charisma and sensuous beauty to the wearer; it’s an earth healing stone,

And helpful for overall well-being and longevity, depression, labour pains,

And cellular memory; it stabilises the pulse and overcomes degenerative

disorders, and it supports the cranium and inner ear, lungs and limbs”.

Defies all rational explanation; almost as if they randomly paired

Ammonite and ammolite with a list of common desires and medical benefits,

And then declared them valid.

According to H.L.Mencken, the American journalist and satirist,

“The most common of all follies is to believe passionately

In the palpably not true. It is the chief occupation of mankind”.

Why anyone with a smidgeon of sense would believe

Such pseudo-mystical, unverifiable flimflam is a mystery.

The fact is, quite simply, an ammonite fossil is what it is.

However, by way of profound contemplation, it’s also something other:

A kind of portal, which allows us to travel through Time and Space.

With an overall survival-span of four hundred and ten million years,

The ammonite represents a significant strand in the web of life on Earth,

And it speaks to us of a kind of grandeur, with which

We’re inextricably connected; in truth, all is connected, and inter-connected,

And if we choose to forget our ties to the whole of Creation,

To the planet, to the stars, to the Cosmos itself,

Collected by the bucket-full at Charmouth.

A sea creature, with the power to help us see.

View all posts by Dafydd →
This entry was posted on 13 October, 2018 in homepage and tagged Dafydd ap Pedr. Bookmark the permalink.