Jukebox by Saira Viola,
hits number 1 on UK and US Amazon 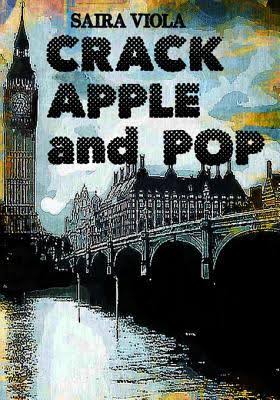 Excerpt : Crack Apple and Pop
There was nothing like the feel and taste of “real” money in your hands. A tight wad of filthy lucre in your pocket felt beautifully corrupt. When you’d done without it for so long, it was infinitely better than a line of coke and twice as sweet as virgin pussy.”
Crack Apple and Pop Novel:  © Saira Viola

There are many, many would-be writers, of whom a select few have actual talent. Of those few, an even smaller percentage have an awareness of how important marketing is, as well as the desirability of having an identifiable persona. Saira Viola is one such writer. Doing a brief search, I found that she has a distinct online presence, with previously published novels and a substantial following in online readers’ and writers’ groups. She also seems to have cultivated a mystique which is reflected in her name (I assume it’s a pseudonym;  although she may  have been lucky enough to be born with such an ideal handle).

Saira Viola’s fiction inhabits the ground covered by contemporary social satire. This is a popular market. The obvious reason for her being still at the margins in spite of her various talents is the very thing that gives her her unique literary identity – her radical prose style, which can be challenging to read. It’s a form that employs many poetic devices, such as internal rhymes, assonance, alliteration, and is derived largely from contemporary lyrical forms, with a feel that is reminiscent sometimes of rap and song lyrics, and at others brings to mind early beat literature and its gonzo derivatives. She calls the style ‘sonic scatterscript’. Although initially it can be challenging, once you get into the spirited swing of it, it becomes fluid and a pleasure to read.

The manuscript that has been submitted for review is Crack Apple and Pop, a dark satire on the culture of greed, which has a gripping plot at its heart. It tells the story of a young Afro-Caribbean man living in London, whose hopes of a career in boxing are ruined by injury, and who is forced by circumstances into a life of crime. Built around that story is a web of satirical subplots and character portraiture that seeks to take apart contemporary values and society.

The protagonist is Tony, a young black guy living in London. The novel opens in media res, with the first of the key pivotal events that change the course of Tony’s life. The victim of a vicious racist attack by a gang of skinheads, he is beaten senseless and left for dead. He deals with this traumatic event pro-actively by taking up boxing, a move which leads to a promising career in the professional ring. However, a bad fight leaves him blinded in one eye. His career destroyed, he takes up a role as a drug dealer, and begins a new career, rising through the crime empire of gangland boss Don March.

This journey gradually brings Tony into the fringes of high society, glamour and celebrity, a world of crooks and heavies, babes and City boys. A complex plot sees him entangled with Indian organised crime, personified in Poncho Khan, Bollywood impresario and jet-set crime lord. Thus Tony comes into contact with the bewitching Dimple Sethi, beautiful Bollywood starlet. The story, which is a combination of satire, high drama and crime thriller, comes to a gripping climax with Dimple helping Tony out of the web he’s entangled in and disposing of Poncho. Meanwhile, Tony takes refuge in Mexico. The novel ends in ambiguity, with various questions left tantalisingly hanging.

View all posts by Saira →
This entry was posted on 19 May, 2016 in homepage and tagged Crack Apple and Pop, Jukebox, Saira Viola. Bookmark the permalink.