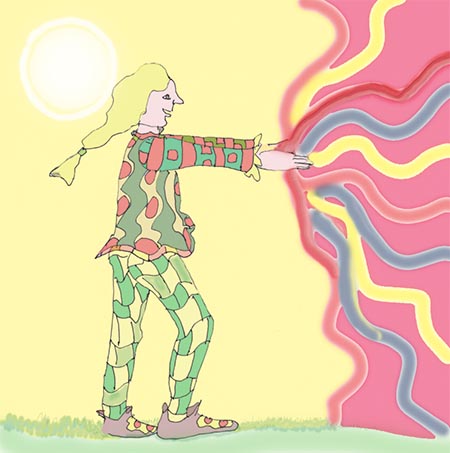 At what point, Daedalus, does a toxin
get created from scratch, a cure for cancer
or ebola lost in the push for a noxious
virus, bombs in the desert financed
by those who declare that the end  must
always justify the means and only mugs
count the bodies, count the devilish cost?
Was the technical sweetness a drug?
You should have noticed the bird-less trees,
the un-splashing fish rivers, the cold bees.
Or were you in love with the spark, an incident
in prehistory’s gloom, a sudden cry of pain
when two stones were accidentally
struck together and so made a flame.
Did it burn for a while, that first hot brand,
then sink into ash with the skill quite lost
for millennia of winds until, at random,
it occurred again, fire – and the later dust
from the witch on the pyre, the pilot
in the burning cage. Tell me, was it worth it?

Enough to untangle my own labyrinth.
I am not accountable
for tinkering fingers

since invention is not concerned with the gods
neither do a craftsman’s plans share frontiers
with any heaven or hell.

discovery is addictive; a dopamine kick.
If I offered you a pot and wooden spoon
you would cook

soup and so feed your belly –
but I can hear tunes in the bark of a tree,
notice a tool

sharp and precise
in the bones of a flatfish stripped by gulls,
thin to its spine on the sand.

You say my devices lead us to death. I say
if it wasn’t for me you would not possess
this, this, this …

Tweet
This entry was posted on 10 September, 2015 in homepage and tagged Daedalus, invention, Mandy Pannett, nick victor, without devices. Bookmark the permalink.