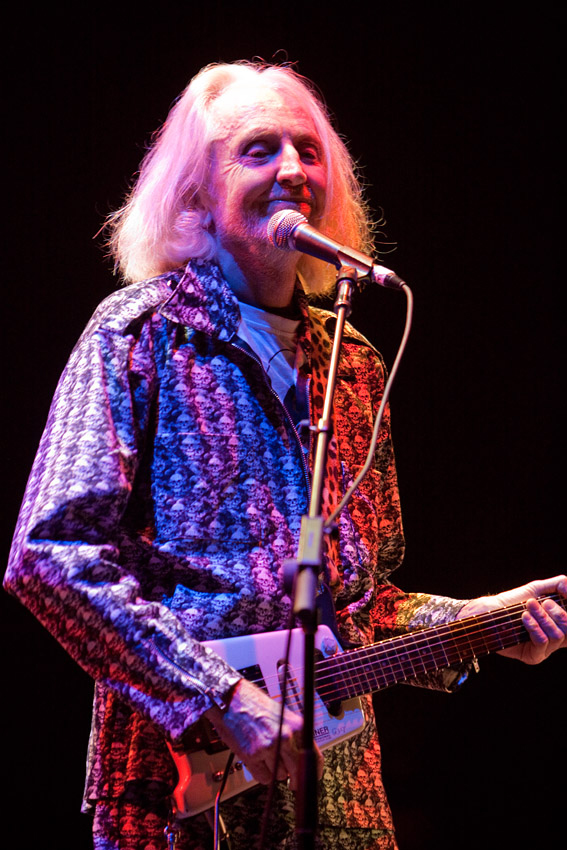 Daevid Allen was born in Australia in 1938, but his springboard to musical legend came after he moved to the UK in 1961. He was a founder member of Soft Machine in 1966, but became best known after starting madcap psychedelic rockers Gong. The band are best known for their Radio Gnome Trilogy, made up of the albums Flying Teapots, Angel’s Egg and You. Although he left Gong in 1975, he resuscitated the band in 1991 and played with them until their last album ‘I See You’ in 2014.

I first encountered Daevid Allen in 1999 when, through a series of happy accidents, I joined Gong at short notice for a European Tour filling in for Didier Malherbe, playing saxes and flutes. I had heard little of Gong’s music and was barely aware of Daevid though I knew some of Gong member Steve Hillage’s music, particularly his album ‘Fish Rising’ which I thought was great. Joining Gong was a turning point in my musical life. For 10 years I toured the world and recorded with Daevid and the band, playing saxes, flutes and some keyboards and I co-wrote much of the ‘Zero to Infinity’ album. I recently read of Daevid Allen’s music being ‘like Sun Ra meets Vivian Stanshall meets DIY punk meets a really big fucking bong’ and I think that just about sums it up!

When I met Daevid, I was immediately taken with his openness, his love of music and words and his sense of wonder and almost childlike curiosity about the world. He was continuously excited by all things artistic and creative. He took great delight in words– whether poetry, lyrics, puns, or just the fun of language and games with word play. I spent endless hours with Daevid and Mike Howlett on tour buses around the world joking and playing with words and rhymes.

With Gong, Daevid was very happy to be an equal part of a group and although he was the soul of the band, wrote the majority of the music, did most of the singing and fronted the band, he was very generous with sharing out songs and instrumental solos and encouraged everyone to write music for the group. He also shared out songwriting credits in a far more generous manner than most in his position would.

Daevid was a talented guitarist and a great improviser. There was a wonderful freedom of spirit in his playing which I enjoyed very much – much more than all the technically accomplished rock guitarists who have everything worked out and pre-prepared. I once heard his soloing style described as like an airplane taking off and you never knew how it would land and I think that was right. Anything could happen and his solos were unpredictable. When one is truly improvising, things don’t always work out- but that is the risk you take. Daevid was wholeheartedly improvising and some magical music and guitar playing resulted. His glissando guitar technique which he said was inspired by Syd Barrett was wonderful and at times awe inspiring – washes of sound, harmony and textures floating in space. He also said that Syd Barrett was the original inspiration for singing with the strong London accent – a characterful style of singing that he, Robert Wyatt, Richard Sinclair (of Caravan) – and later David Bowie – all adopted, at least for a while.

Daevid not only started off the bands Gong and Soft Machine (both which I have enjoyed playing with for many years) , he also recorded many solo albums, and formed University of Errors, Brainville, Magick Brothers and various other groups. He was a catalyst for an enormous amount of much music making and musicians and poets worldwide were drawn to him for his creativity and his huge enthusiasm for life. 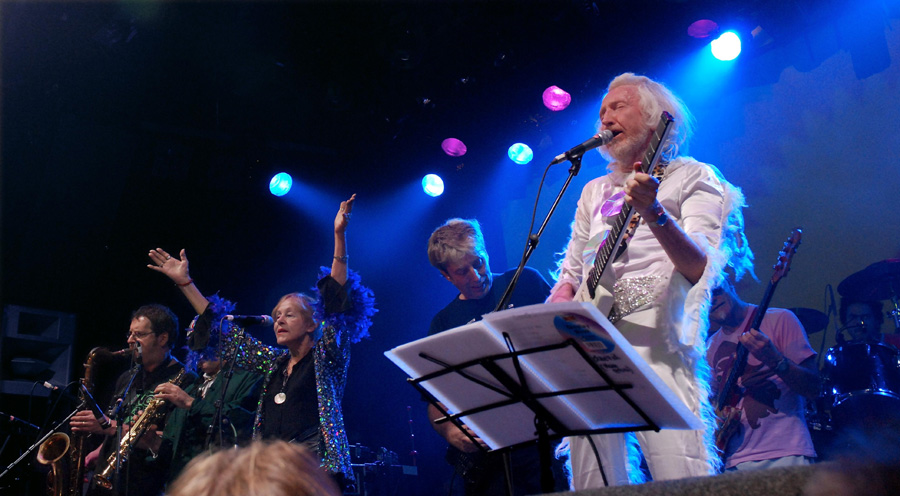 He loved jazz, free form improvisation, songs, experimental music, folk music, nursery rhymes, noise music, chanting and all sorts of fringe musics. He used to wind people (including myself!) up by saying he ‘hated the Beatles’. He also said he ‘hated Prog’. He embraced punk and new wave music and there was often a youthful and fiery energy to his music, from his band Planet Gong right up to the end. On the very last Gong album – ‘I See You’ there are almost punk like thrashes that sound like a band of seventeen year olds – not a 76 year old man – and certainly not a music icon from the 1970s.

Daevid was kind, fun, inspiring, encouraging, endlessly creative, and an original thinker. A big fan of the Goon Show, his crazy humour was loved by millions though he also saw it as having a revolutionary edge to it too. I think it was in the subversiveness. The Flying Teapot trilogy, Radio Gnome and the Pot Headed Pixies were all wonderful inventions – charmingly bonkers.  He was not one to toe the line and could often be contrary – sometimes infuriatingly so. One funny anecdote I remember was that he went to a legalise cannabis event in Hyde Park in around 2001 as a special guest as he was such a leader of the counter-cultrure movement. You would not believe how many people I have heard say that they had their first trip listening to Gong’s music. Anyway Daevid went to this event at Hyde Park and in front of a big crowd, stood up and said ‘Ban cannabis! It’s terrible for you!’ And the throng of people in their stoned haze just cheered – ‘Yay! Great!’ Hilarious and very Daevid.

Of course being the age he was Daevid was right there when it was all happening in the 1960s. He lent Jimi Hendrix his first amp when he came to London, and enjoyed playing chess with him. He played alongside all the rock greats when they were starting out. He was in Paris during the riots in 1968 and the Stonehenge and Glastonbury festivals in the early 1970s. Gong were one of Richard Branson’s very first bands on Virgin records. I loved to hear his stories about those times.

I always felt that Daevid was ‘the real thing’ not someone trying to be a rock star or a poseur. He was living the alternative lifestyle full of music, poetry and life before such a thing was even invented. An artistic beatnik, an intellectual hippie, a comic surrealist and a poetic musician.

A true original and an inspiration to so many.

All over the world I have encountered so much love for Daevid and his music. He has now had his last cuppa tea and left us on his flying teapot to another place. Farewell and bon voyage. I feel honoured to have known him. And thank you for the music you daft old bugger.