‘Dancing Out In Space’ 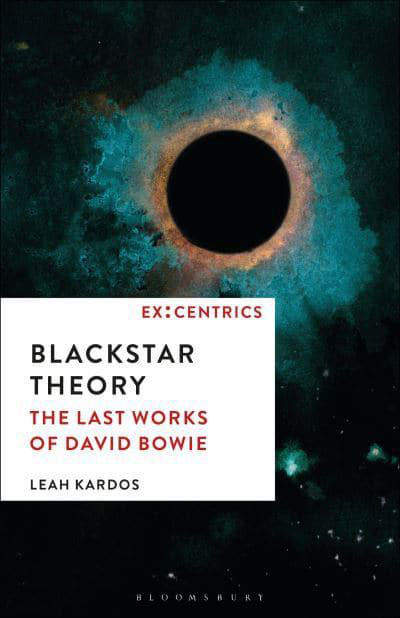 In his final years David Bowie managed to not only regain critical acceptance but make a surprising high-profile comeback after a decade of silence, with two albums, associated singles and an experimental play. He also seemed to orchestrate the presentation of his own death, achieving what Leah Kardos calls ‘remystification’.

Bowie of course was known for mystification and the use of personas, from Ziggy Stardust to The Thin White Duke, but from the mid 1980s onwards he had appeared to simply or mostly be David Bowie, popstar and nice guy, even when experimenting with drum’n’bass, or writing characters for 1. Outside, his reunion project with Brian Eno, who had been a major accomplice on the Berlin Trilogy of albums (Low, “Heroes” and Lodger).

In this readable and discursive book, Kardos shows how the music, lyrics, art work and videos for The Next Day and ★ (known as Blackstar), and the play Lazarus,  drew on a rich variety of established Bowie interests and ideas, along with the new, to explore what Keith Ansell-Pearson calls on the back cover ‘the nature of identity, creativity, chaos, transience and im/mortality’.

Kardos is excellent at following networks of meaning and picking up Bowie’s clues, as well as contextualising his lyrics and music within literature and Bowie’s back catalogue. She is also interested in the notion of  creative ‘late style’, influences and originality. Bowie’s listening habits, collaborations, writing processes, occult and Buddhist reading are all used to intelligently inform and deconstruct here. There are also some brief technical music discussions of various tracks, but these are thankfully short interludes and if – like me – you are not a reader of music, they don’t spoil the flow of the book.

Blackstar Theory starts by backtracking, with some critical nods to previous albums such as Reality, Bowie’s writing and editorial role at Modern Painters magazine, the rise of digital technology, and Bowie’s seemingly settled life in Manhattan. Alongside a consideration of ‘late style’, Kardos discusses the Bowie Is… exhibition, Tony Visconti, and Bowie’s preference for confusion and complexity. She also warns against reading everything as autobiography rather than revisitation, reconsideration and reflection. Bowie, it seems, was still playing games with his listeners and fans.

The Next Day was recorded in secret and issued at short notice, with the news swiftly going viral and sales going through the roof. The cover, along with tracks such as ‘Where Are We Now?’ suggested that Bowie had been looking back at his life. The cover photo from “Heroes” was blanked out with a white square, the video for ‘Where Are We Now?’ revisited Berlin, with black and white films of the city flickering behind two mannequins with faces – one of Bowie singing – projected on them, all within an artist’s studio. The music seemed nostalgic and sad, full of longing and dissociation.

Lazarus, meanwhile, picked up themes from The Man Who Fell to Earth and helped Bowie fulfil a long-held ambition of his to write a play. The alien who is stranded on Earth is here older, alcoholic, delusional and alone. He lives within an anonymous apartment (possibly in New York) where apparitions visit, and Bowie songs are re-arranged and revisited as a musical commentary on longing, separation, obsession, mourning and humanity’s violence and self-destruction. I saw the London production and wasn’t impressed: it felt like a bad student project, but I am glad I saw it.

Of course, by the time the original New York play opened, Bowie knew he was dying. He attended the opening night and took a bow, but had been forced into non-attendance of later rehearsals and recording. What he had done, however, was make some new musical connections to musicians he would use to record Blackstar, a strange mix of rock beat, freeform jazz and mysterious vocals.

The songs, especially following the news of Bowie’s death, seemed poignant and laced with references to death and mourning. Images from the Kabbalah and other occult sources such as Aleistair Crowley and Egyptology, along with ideas from Nietzsche and trickster mythology, and musical references from previous songs. The videos are full of disconnected images and allusions: Major Tom seems to have become a corpse on another planet, perhaps as a result of his junkie phase during ‘Ashes to Ashes’; a crucifixion scene; scarecrows; surrealism; German expressionism…

The past and future merge or are perhaps the same thing. An unseeing Bowie (playing his ‘Buttoneyes’ character with bandaged eyes) retreats into the cupboard he emerged from a few minutes before. He is dressed in a suit reminiscent from the Station to Station era, and although he can move it may be that he is lying on his death bed and it is a spirit leaving. Or returning. Or both. Or neither.

Kardos skilfully unpicks the science and imagery of black holes and blackstars, moving from a conversation between Bowie and Burroughs, via 2001: A Space Odyssey and Chariot of the Gods, to the fact that we are literally physically made of space dust. What’s great is she doesn’t try to pin anything down, just offers possibilities, prepared to embrace the fact that, as he always did and has done, Bowie’s work leaves us wondering and in a state of wonder.

This is a clever, entertaining and informative book, one that is thankfully miles away from rockstar biography or beard-scratching musicological treatise. It is thoughtful, wide-ranging and well-researched. In fact, it’s simply one of the best books about Bowie I have come across.

View all posts by Rupert →
This entry was posted on 13 August, 2022 in homepage and tagged Blackstar Theory. The Last Works of David Bowie, Leah Kardos, Rupert Loydell. Bookmark the permalink.