Declared Independence from the UK 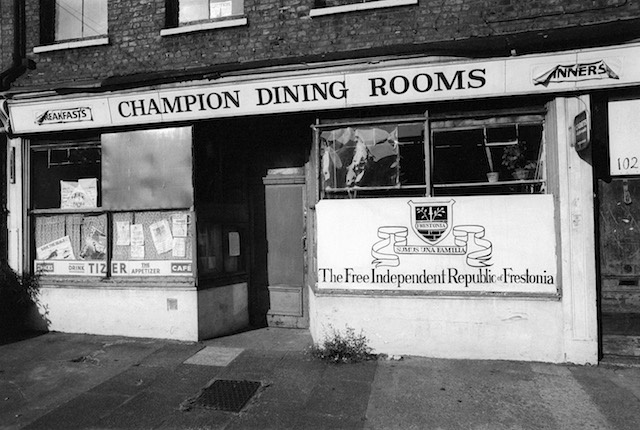 A sign painted onto a building in Freston Road, Notting Hill, marking the Free Independent Republic of Frestonia
(All photos by Tony Sleep)
.

In 1977, squatters in Freston Road, Notting Hill declared independence from the British state. Facing eviction by the Greater London Council (GLC), the community figured the best way to evade the constraints imposed on them was to just free themselves of those constraints altogether. So they lobbied the UN and established a 1.8-acre microstate – “The Free and Independent Republic of Frestonia” – complete with its own postage stamps, visas and passports.

The 100-odd citizens of Frestonia varied from actors, artists and addicts to normal working class Londoners and assorted bohemian flotsam. Playwright – and one of London’s first graffiti artists – Heathcote Williams was Ambassador to Great Britain. David Rappaport (the actor who starred as Randall, King of the Dwarves in Terry Gilliam’s Time Bandits) was the Minister of Foreign Affairs. A two-year-old child named Francesco Bogina Bramley was the Minister for Education.

If the same thing happened today (which it probably wouldn’t, because squatting residential buildings is now something you can go to jail for), police would likely move in with eviction papers and battering rams. But back then, living in abandoned buildings apparently wasn’t seen as the abhorrent transgression we now know it to be. In fact, even Tory MP Geoffrey Howe – Margaret Thatcher’s longest-serving Cabinet minister – wrote to the Frestonians expressing his support, saying, “I can hardly fail to be moved by your aspirations.”

Photographer Tony Sleep – who documented the period in his “Frestonia” photo series – was one of the microstate’s very first residents.

“I was working with an alternative work agency called Gentle Ghost at the time,” he tells me. “Notting Hill was full of all kinds of nascent counter-culture projects, which was why I moved there. I’d split up with my girlfriend and moved into one of the squats on Freston Road as it was opening up.”

Before Notting Hill became a byword for gentrification – and the stomping ground of a weird mix of fund managers, Italian tourists and artisanal candle designers – it wasn’t exactly a desirable area. Now somewhere a holistic pet spa could conceivably turn a profit, it used to be a hash-scented expanse of dilapidated bedsits and barren yards – the perfect breeding ground for a counter-cultural scene.

“Notting Hill was incredibly lively in those days,” says Tony. “The whole area was in a political turmoil of minority rights, race hate, pressure groups… you name it. People wanted to experiment with different ways of living. It was so far away from the gentrified place that it is now, full of merchant bankers. A lot of Notting Hill was a slum.” 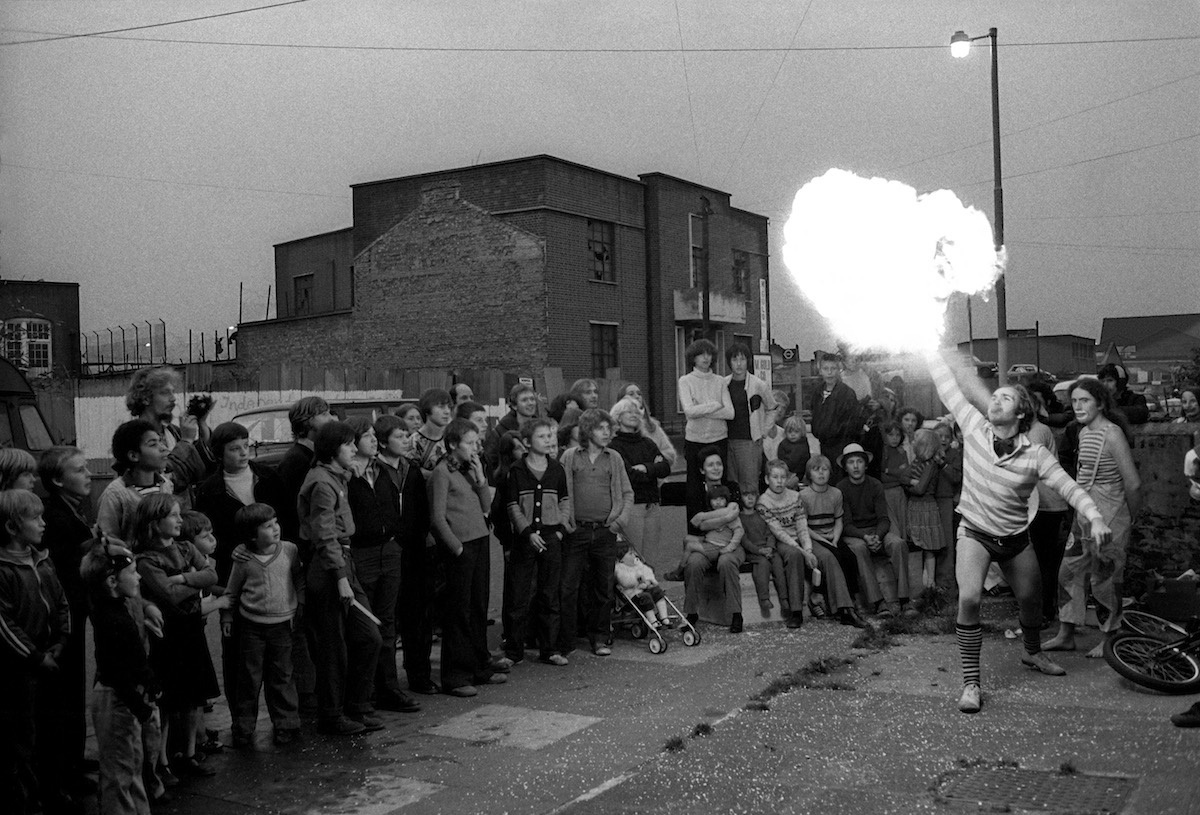 “Frestonian entertainers would always attract hordes of kids from the local estates,” writes Tony. “Mostly they despised the squatters, but they loved fire. Every few days some would set fire to dumped tyres or cars or rubbish just to watch the Fire Brigade turn up.”

The 1960s council housing boom, and accompanying high rise estates, saw entire streets of condemned terrace housing sitting empty throughout the rest of the decade and into the early-70s – a situation that helped to facilitate large scale squatting in the capital. However, as social problems from failed new estates took hold on the area, so too did tensions between squatters and the recently shifted long-term residents.

”With the local community, it was difficult,” recalls Tony. “Many of them were not happy – the dream didn’t work out with those 60s estates, as we well know. Yes, it was nice to escape the damp and the horrible housing that we then squatted, but I think people were put out to see a ‘bunch of freeloaders’ come in and take over their old homes. We had communal gardens. We were on the ground floor. They were 20 storeys up in a broken lift, looking down on their old homes.”

“There was also the class thing,” he continues. “The area surrounding Freston Road back then was poor and very working class. It was an industrial area full of breakers yards… a lot of gangsters. There was dereliction and poverty everywhere. There was a big cultural difference between us and people who thought we’d come in and stolen the housing that – in some ways – they would have preferred to stay in.”

Houses in Freston Road were squatted for four years before the idea for a declaration of independence was floated. Drawn up by Nick Albery – a cultural agitator and, later, a Green Party candidate for the area – the inspiration was the classic 1949 comedy Passport to Pimlico, in which an unexploded WWII bomb detonates, exposing an old document that declares Pimlico to be part of Burgundy and its residents honouree “Burgundians” – an identity they take to with determined, drunken relish. 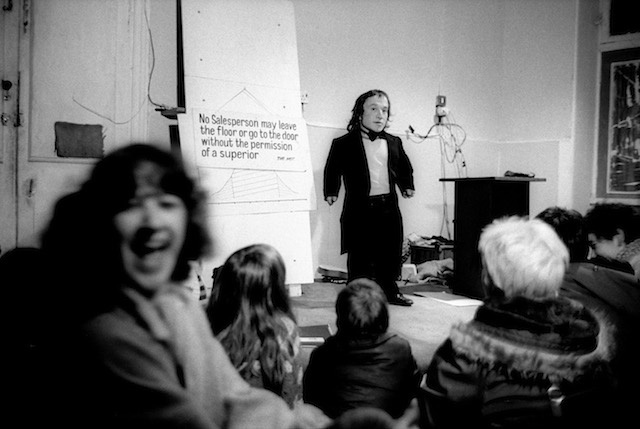 David Rappaport, the Frestonia Minister of Foreign Affairs, lived in Frestonia before making his name as an actor.

“The GLC decided that they were going to kick out all the dirty squatters, knock down the housing and leave a field of rubble,” says Tony. “We weren’t very happy about that. There was no plan, no greater scheme for building alternative housing. They just wanted to clear the site.

“Nick was the father of the whole idea, along with David Rappaport and Heathcote Williams. There was also a chap called Mick Saunders who wrote Alternative London, a counter-cultural compendium of all the stuff that was happening in the 1970s. Those four cooked up the idea. They rented a 16mm copy of Passport to Pimlico, set up a local screening for anyone who wanted to watch it and said, ‘Shall we do this?’ And everybody said, ‘Well, yes, I suppose we could.’ It was an expedient response, one that came out of threat. But it was also a great bit of theatre, and fantastic PR.”

On the 31st of October, 1977, independence was declared. Thanks to the subsequent media attention, the GLC found it more difficult than ever to broach the subject of full-scale demolition. Head of the GLC, Sir Horace Cutler, wrote a letter to the residents stating that “if you didn’t exist, it would be necessary to make you up”. Nick Albery responded: “Since we do exist, why is it necessary to destroy us?” 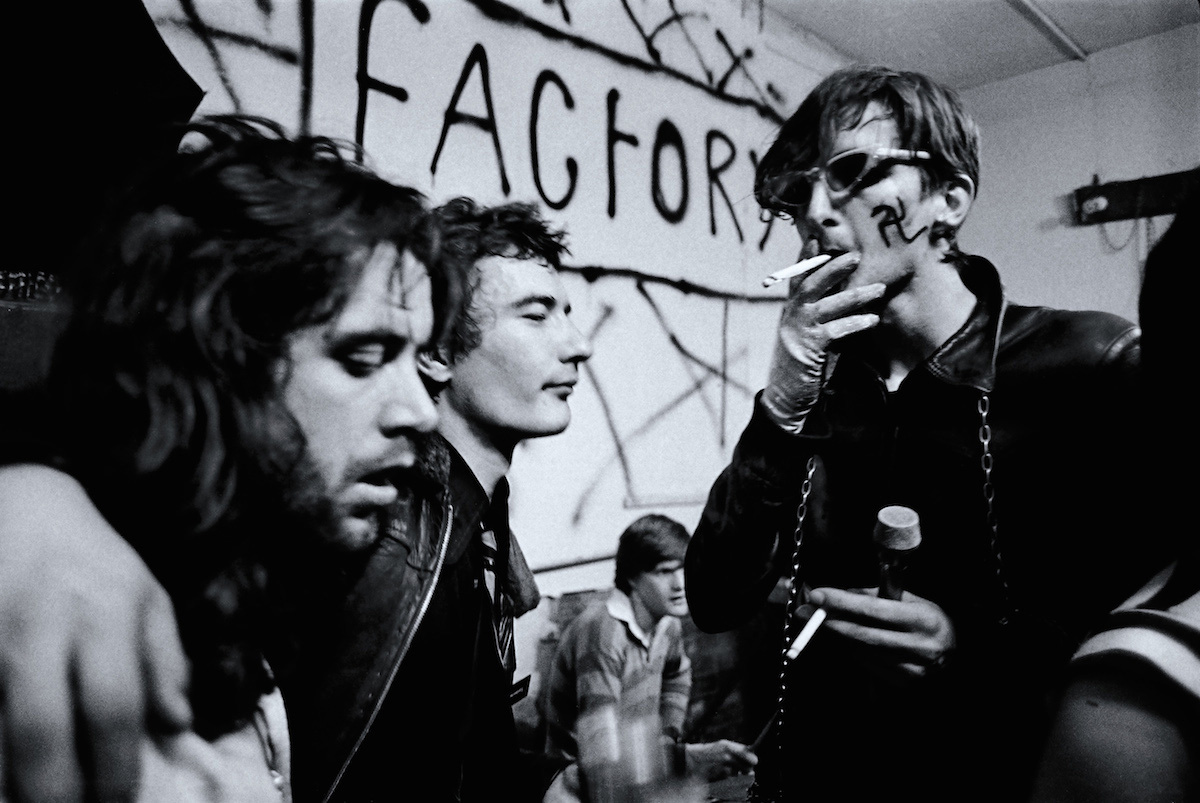 “Miss Nazi were a local punk band who made the Sex Pistols seem sophisticated and restrained. They made little pretence of musical ability, but were cutting-edge when it came to upsetting people.”

There are certain things that every sovereign state needs, and the Frestonians were quick to get themselves up to international standards. They introduced postage stamps, for instance, that replaced the Queen with “Gary the Gorilla”.

“There was a visa stamp; there were postage stamps; there was a little table on the entrance to Frestonia that would stamp passports,” recalls Tony. “People managed to send letters around the world using Frestonia stamps. God knows how, but they worked… they were actually recognised by the Post Office.”

Frestonia’s cultural scene was equally industrious. The “Frestonian National Theatre” (at the Peoples Hall, Freston Road) ran the London premiere of Heathcote Williams’ The Immoralist, while the “Frestonian National Film Institute” held regular movie screenings. In 1982, as Frestonia celebrated its fifth anniversary, The Clash recorded much of Combat Rock at Peoples Hall.

Richard Adams, a Frestonia resident, invented a coat of arms for the community, bearing the motto: “Nos Sumos Una Familia”, or “We are all one family”. Like any extended family, however, a certain amount of tension between residents was inevitable.

“It created a dynamic kind of friction,” says Tony. “Everyone had an equal right to be there, so in a way you just had to get along. Generally, what we all had in common was that we were under threat of being chucked out and made homeless – exactly the psychology you had during the Blitz. You end up with a community forging itself because of external threat.

“The thing about squatting is that there are no gateway requirements. There was no homogeneity to it at all; it was a complete spectrum of people. I suppose you could say that there was a dominant hippie element to it because of what squatting was at that time, but you also had people who were homeless for all kinds of reasons. There were a lot of people with drug and alcohol problems; there were a lot of people who had a history of mental illness; and there were ordinary working class people who just needed somewhere to live.” 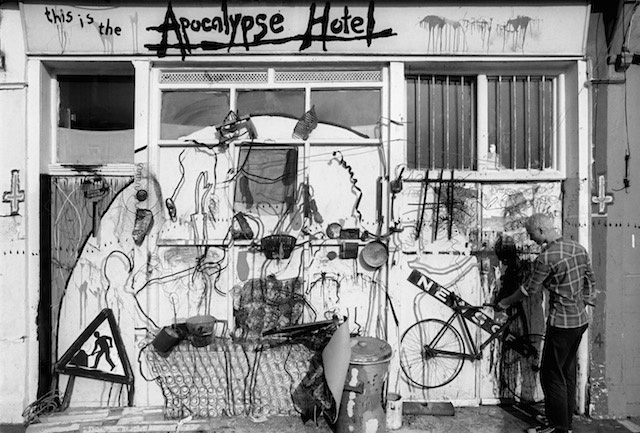 “The Apocalypse Hotel. Definitely far out along the punk axis, the inhabitants were compulsively creative, even though it usually meant wrecking things. The frontage of the hotel changed almost weekly, from camouflage to spattered blood-red, to detritus collage. Inside, staircases vanished overnight, walls were purely provisional and it was a dangerous place for the careless.”

Residents were consistently harassed by both the police and criminals in the area, the former wanting to bust people for drugs and the latter wanting to steal the supply. In fact, break-in attempts were so frequent that Tony resorted to stacking bricks next to his bed in case he ever needed a midnight projectile.

Despite that aggro, the community forged on. By 1982, Frestonia encompassed 23 houses containing 97 residents, and the GLC had abandoned plans for a demolition – though were still determined to redevelop the site.

In a bid to keep a hold on their home, residents set themselves up as Bramley’s Housing Co-Op (all Frestonia residents adopted the surname Bramley, the idea being that the GLC would have to move them all as one family if they eventually kicked them out) and negotiated a deal with the Notting Hill housing trust.

That step towards legitimacy essentially spelled the end of Frestonia, with a number of new residents moving in who were unable to stick to the ideals of the Frestonian “nation”. However, as Nick Albery wrote in 1983, it was still a small victory for the community, which had spent the better part of a decade battling the GLC and had now saved “a small part of West London from a bleak future”.

It’s a sentiment that Tony echoes: “The spirit of Frestonia is still there in a sense, because Bramley’s is still there. And because we formed the co-op, we were able to have some input into what got built. So an echo of the old Frestonia exists… culturally, it’s different down there.”

Meeting Brighton’s ‘King of the Squatters’

Originally published in Vice on line at Vice Magazine.

One Response to Declared Independence from the UK