DEVIL AT THE GATE 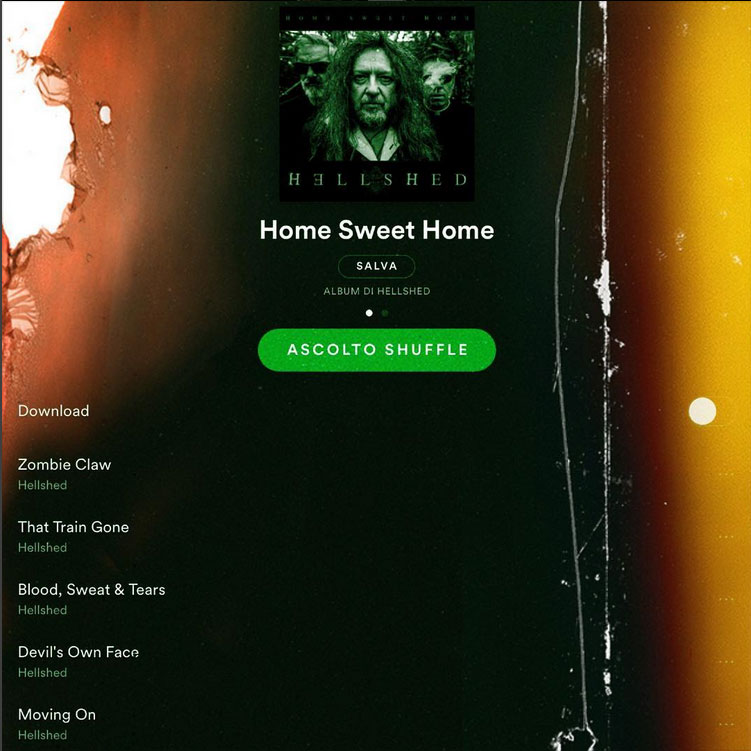 From the crunch of gravel, creak of locks and sounds of emanation a ghostly, nostalgic whine, the seeming fruit of a musical saw (but in reality a thermin) pierces the aural flesh and ushers us into the stately churn of Zombie Claw, the opening track of Hellshed’s Home Sweet Home. Newly released by Green Queen music, these Italian masters of the moss beneath the rock that rolls carve a unique identity across the European heavy music scene. This music blisters like the flesh sores of their stated protagonist. It festers rather than flashes, containing some of the eerie permanence of the past, chiefly through Popa B.A.D.’s flanged style vocals, that have the effect of rusting the air all around.

This trio combining Vicar Da Bruit on vocals, guitar, keyboards, tambourine and gadgets, Professor O.B. Scene on  Baritone acoustic & electric guitars, keyboards, pipe, strings, theremin and there is no other way of putting it, stump, along with  Popa B.A.D. on lead vocals, refered to here as grunts, as well as playing guitars, bass, tambourine and harp reveal themselves in unique compliment to other bands working within this spectrum. This is achieved because there really is no other band like this working  in this spectrum. The absence of drums in favour of the tambourine’s stately keeping of rhythm ensure that the heaviness never touches the sonic indulgence and sometime overbearingness of metal, allowing these stone voiced sprites to summon their musical warnings from within and across the weathered landscape of not only music itself, but the terrain in which that music is encountered.

That Train Gone vibrates and vibratos, as if it were  the blues being shaken in a bag of stone and glass. There is a krautrock style pulse, played of course without electronics, as if Hellshed were ancient observers, carved from the European rockface like a kind of Mount Rushmore of music, and thus able to cast aspersions and variations on the major forms of expression that have streaked through and painted the land. It is blues rock that has been controlled and managed just enough to avoid disappearance into what we might expect such songs to sound like, and thereby delivering a series of small scale textural and tonal surprises.

Blood Sweat and Tears’, and Popa’s bear like growl reveals how the efforts of resistance when placed against the pressures of the norm, taints the aims of a spitefully bright morning with a coffee voiced reminder of melifulous intent, as the lyrics remind the Good lord that he has been told and indeed warned about all the ‘dirty deeds’ awaiting forgiveness and acceptance and the music bolsters this finely achieved and mature recognition of both strength and limitations.

The beautiful acoustic pickings of Devils Own Face delights and surpises, as Popa B.A.D. sings with a voice that sounds like Tom Waits’ grandfather, of the nights spent sheltering from a prospective  witch hunt.  The skill in telling a dark story with the most pleasing of musical treatments shows just how well older hands can weave a finer and more substantial cloth and the song soon broadens thanks to the curative strings of O.B. Scene into a stately examination of the effects of black magic on the worshipper, both historically and to those who are currently involved or interested.

Moving On is pure delta blues diversion, necessary after this interesting tale and allows for the darkness of name, title and image to be subsumed into a musical broth that although manifested in a cauldron, offers enough nourishment for all.

Finger Lickin Good refers not to the chicken the easily satisfied cram into their sweating faces, but to the succulent ‘plums that are made for lovin’,’ no less, and one is reminded as Popa B.A.D. proffers the erection of a man of a certain age through his voice alone, just how primal we all are when desperation occurs and the ensuing push of the blood comes to the shove of male need. The music is simple here but has an effective muscularity to it, coming from men who have lived knowing how to deal with the clichés of lust by ensuring that the ‘holy smoke of desire will keep on smoking with you.’ Whoever the object of yearning and want may be, she may not have not have much of a chance of escape, but at least there is still the promise of some form of salvation when the conclusion is reached.

Voodoo Thing is a kind of Exile From Main Street style jamble you can imagine the increasingly reptilian Sir Mick spiralling away at, and the churning guitar sounds soon leads into a blistering if controlled tour de force, representing the sparks and the spasms at play.

Flowers is a love song  from the earth itself, and is possessed of a touching dignity. It could be Don Vito Corleone’s final lullaby as he topples to his death in the orchard of orange trees, as his bemused grandchild capers closeby. To me, it sounds like the song of the unsung heart achieving a near posthumous expression as the protagonist calls for the ‘saving of the soul before coming back for more.’  Strawberry Fields like mellotron pulses can be heard in the background before the guitar powers forth as the soul is reminded to ‘never let itself fully show’ and there is an almost  singalong aspect as the song reaches its conclusion, as if there were something even more tuneful waiting to burst forth.

The aural gardener is soon on hand to crop this however and the somewhat hysteric guitar line of Moonshine soon takes us from the soil tainted spirit, to a higher realm as, ‘through the tall pines we see the night bird.’ These template images written in english by italians have a unique directness and create if not linear stories, then certainly small films of evocation, which the blues based backings both soundtrack and authenticate.

The album as a whole is not  hellish at all, but soon reveals itself to be the shelter form said fires,  a place of reflection almost, where the founding forces of supposed suffering sweeten the home of the title and allow us, through these powerful and concise songs, the chance to learn how to survive all we have witnessed and known.

Red wine,Meatballs and a Cigar is the perfect summation for the person of a certain age taking stock and its almost Django Rheinhart stylings dress these tattooed lotharios of the dark in the slickest of suits (and possible cummerbunds),  as they charm their prospective audience with a lifetime of experience.

Pot o’ Noodles is a strident piece of middle aged  rebellion against perception by others,  in which the greater cares of the many are sacrificed for the chances of personalised freedom and the blues based riffing motors the engine along before we move to the final but main station of if not the cross then the emblem for change.

Album closer  Diamonds Left To Die is Home Sweet Home’s Enter Sandman/Butterfly Collector/Sweet Child in Time, or any other variation on a song that you wouldn’t expect to hear on an album having heard the rest of the music. It has an eerie beauty to it and a masterly control of magic and moment as the rich elements in the band reveal themselves in their full relevance. This is hard edged ambience and Popa’s voice is at its best here. It is as if the rest of the record is a preparation for this song as a piece of art in and of itself, a representation of Hellshed’s true intent and the means with which they reveal the range of their experience and expertise gained across over thirty years as  both a leading Italian band and as separate musicians. As most great pop and rock music has shown, limited forms are often the greater means of expression and the six minutes fifty one seconds of this wonderful song complete the journey towards the home we have been searching for. It is a place where the demons can be fed and the devil himself satisfied with a seat in the garden. The winds around him may purple and warp as he relaxes, but the air, although stained will stay fresh.

As we breathe in this mix of the ancient and the new, the scared, scarred and sacred, something profane as well as divine has been preserved.  We have been taken on a fascinating journey. The gate has been opened and it has led us directly back into our own homes, enabling us to study each corner and to scour every shadow. Every man, woman and child’s privacies are their own castle, but when set against the forces of the dark that threaten and gather as we speak, each wall of stone is reduced to the state of a shed.  Against the winds of distemper, now we must bolster and shake. View all posts by David →
This entry was posted on 24 May, 2017 in homepage and tagged David Erdos, Hellshed. Bookmark the permalink.