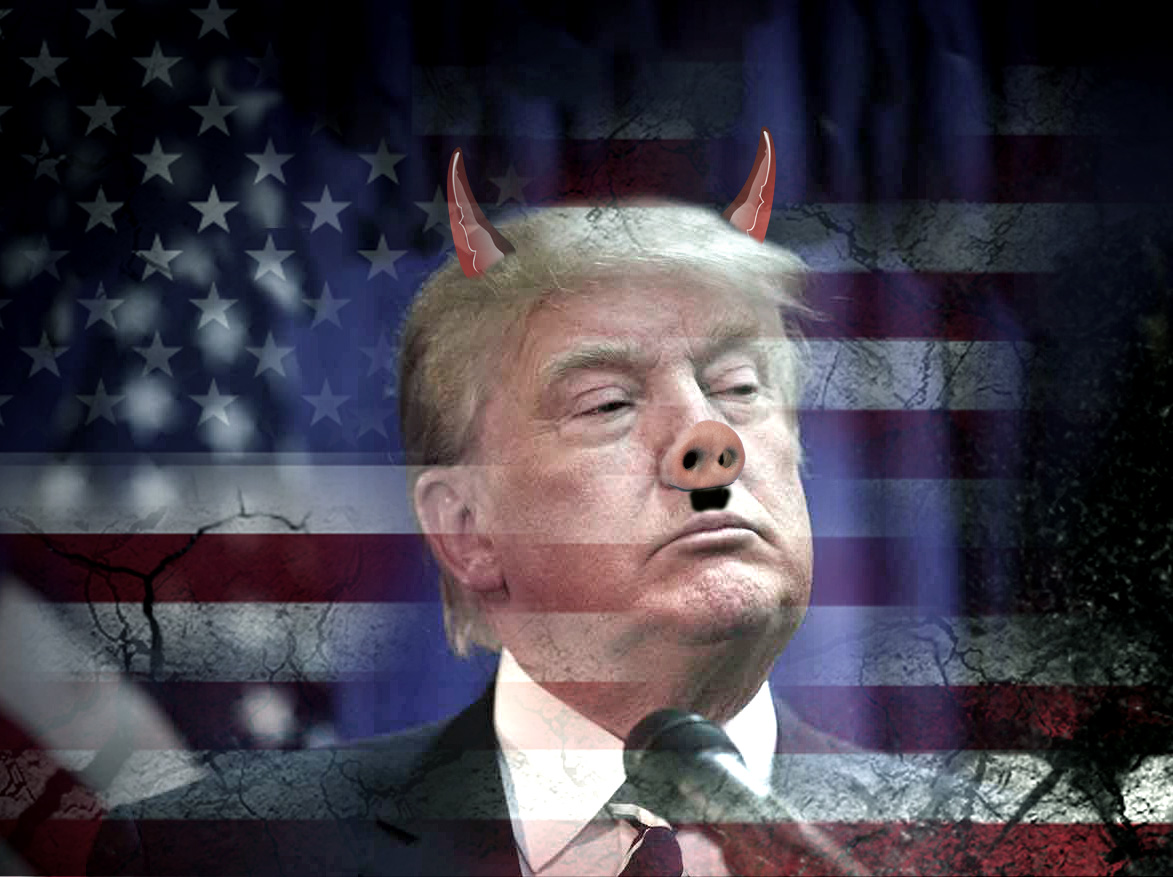 The total obscenity of the American Dream
Comes to fruition in Donald J. Trump:
“We need a leader that wrote ‘The Art of the Deal.’ ”
He declares on his Presidential stump.

What’s wrong is that Trump’s best-selling volume,
On the virtues of property speculation,
Wasn’t written by him but by one Tony Schwarz
(Now dreading Trump as leader of his nation).

‘The Art of the Deal’ established Donald J. Trump
As the archetypally successful tycoon.
Schwarz presented him in the best possible light –
Striving to hide a poisonous buffoon.

“I put lipstick on a pig,” Schwarz later would say
When overcome with remorse,
For he’d branded Trump as a winning charmer ¬–
One that an electorate could endorse.

Whereas in his Presidential run-up ‘the Donald’
Would soon reveal his true colours:
“It really doesn’t matter what the media write”, Trump says,
“As long as you’ve got a young piece of ass.”

Despite self-enchanted claims to be a self made man
Trump’s wealth has been largely inherited
From father Fred, a slum landlord and speculator,
Who was once notoriously prosecuted

By the US Justice Department for refusing
To rent to African-Americans –
To do so clashed with the beliefs Fred gleaned
From his attendance at KKK rallies. [1]

It’s said the apple doesn’t fall far from the tree
And so the son is true to Fred’s prejudice
With Trump’s plans to exclude Mexicans with a wall
And to make Mexico pay for the privilege.

Trump’s first wife, Ivana, famously claimed
That Trump was a fan of Adolf Hitler
And that he kept a copy of Hitler’s speeches,
“My New Order,” in his bedside cabinet.

“The beauty of me is that I’m very rich,” says the gilded toad.
“The point is, you can never be too greedy.”
“My IQ is one of the highest — and you all know it!”
He then changes gear to become simply creepy:

“I’ve said if Ivanka weren’t my daughter,
“Perhaps I would be dating her.”
If he can sink to using incest as a come-on to gain the White House
What’s to stop such a perv killing her or perhaps eating her?

When the publisher Random House gave him an advance
Of half a million to write his autobiography,
They sent a mock-up to Trump Towers for his approval –
They’d not held back on the typography:

They’d featured his name, TRUMP, in gold block capitals
With him being depicted as a new Alexander the Great.
“Please make my name much bigger.” responded the man
Whose vampirish megalomania was his favourite trait.

Schwarz saw Trump as driven by an insatiable hunger
For “money, praise, and celebrity.”
He described him by saying “He’s a living black hole!”
And he viewed his mindset with hilarity.

Trump would insist that an apartment
In one of his latest developments
Has been sold to a Prince or a Sultan
To add kudos to his establishment.

“Prince Charles has bought several”, he’d insist
Although there wasn’t a shred of evidence,
But snobs and New York sheep fell for his ploy
And Trump gained his golden recompense.

This mega-vulgarian who blows his own trumpet
So hard you think he’s likely to blow a fuse –
This red-faced Aryan with his combed-over hair
Is a charlatan whose every game-plan is a ruse.

He has 3,500 outstanding lawsuits pending. [2]
He takes rides on the ‘Lolita Express’
To a Caribbean island filled with underage girls
Thanks to Jeffrey Epstein, a slave to excess –

A convicted sex criminal, friends with Prince Andrew,
Bill Clinton, and other white trash sleazeballs.
Trump joined him as a sex-tourist and an orgy-goer
With a penchant for raping 13-year-old girls.

One alleged victim, not named in Court documents,
Claims that during one “savage sexual attack”
Trump tied her to a bed, then “proceeded to forcibly rape” her
While she “loudly pleaded” for him to stop.

The billionaire “screamed that he would do whatever he wanted”.
Trump struck her with his open hands then threatened the girl:
“Were she ever to reveal any of the details of the sexual abuse”,
She and her family “would be physically harmed if not killed”. [3]

At the age of 22, Trump had four military deferments
To get out of fighting in Vietnam.
He claimed he’d had an “uncomfortable bone” in one his feet
Yet couldn’t remember which foot caused the ‘problem.’

That his millionaire father was instrumental in this great patriot
Avoiding Vietnam was also the truth –
Leaving Trump to say flippantly that his “personal Vietnam”
Was to have avoided sexual diseases in his youth.

Trump’s buildings are erected by conning unpaid craftsmen.
His Trump University peddles Mickey Mouse degrees.
Here’s a man who declares war on ‘political correctness’
As it stops him from abusing whomsoever he pleases.

Foul-tempered and violent he singles out hecklers
To be beaten up or pepper-sprayed by bodyguards.
“I’d like to punch him in the face,” he says of a protester –
This Neanderthal, and virulently racist blow-hard.

Now imagine Donald Trump in the White House,
Conjuring his self-serving lies out of thin air.
With his sleek little fingers fondling the nuclear codes,
The demagogue grins and mutters, ‘Do I dare?’

“It’s freezing and snowing in New York – we need global warming!”
Is Trump’s take on an apocalyptic predicament.
“It’s impossible to keep him focused on any topic,” says Schwarz,
“Other than his own self-aggrandizement.”

“All Moslems should leave the United States now”,
Says Trump on a populist roll.
The US father of a Muslim soldier killed in action
Condemns Trump as “a black soul.” 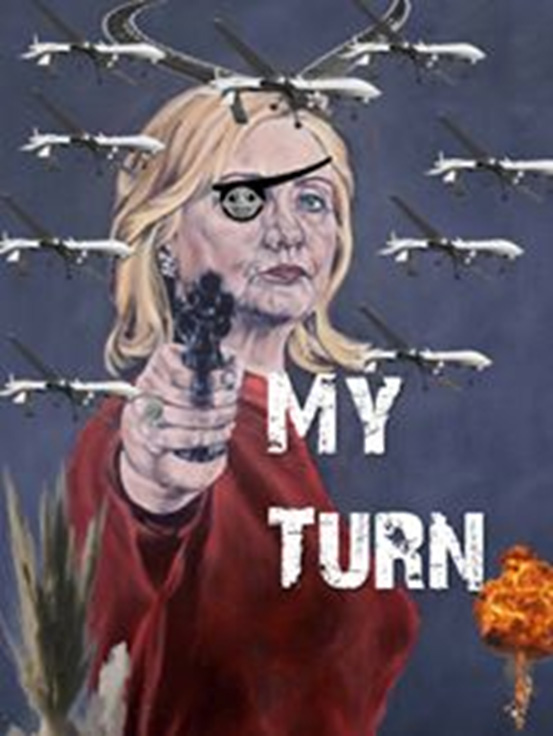 Donald Trump’s warmongering rival is little better –
A humourless Iron Lady in hock to Wall Street:
Who crows after Gaddafi’s murder by CIA stooges:
She sadistically gloats, “We came; we saw; he died!”

Secretary Hillary Clinton’s emails show that Libya’s plan
To create a gold-backed African currency to compete
With the dollar was the real motive for NATO intervention,
And Hillary’s death squad saw the job was complete. [4]

Hillary’s role in the bombing of Libya
As the US Secretary of State
Led to a body-count of over twelve thousand
And to ISIS’s regime of hate.

Clinton leaves a trail of more bloody coups:
Both in Honduras and in the Ukraine.
Appropriately nine out of ten US arms makers.
Are generously funding her campaign.

When the “women’s candidate” kills women
With drones and with Cruise missiles,
It’s hard not to think her feminism’s selective
And if not conflicted, then utterly specious.

Despite 400,000 civilians being killed in Syria
This neo-con Mother Kali calls for more.
Unable to mind her own business, she demands
‘Regime change’ which is code for war.

Hillary Clinton’s support for the jihadis in Syria
Would further fuel the Islamic State –
Now with powerful US weapons and equipment
With which to revive its Caliphate.

She has armed Saudis with sophisticated weapons
To carry out genocide in the Yemen.
“The nuclear option should not be off the table”
She has said in relation to Iran.

Bill and Hillary’s private slush fund,
The Clinton Global Foundation, ,
Gives only ten percent to charity
Despite its noble intentions.

The Clinton Foundation exists to open the door
To the third world’s valuable resources:
If corporate interests donate to its crooked coffers
Then the Clintons will pressurize world leaders.

If these are the best candidates that are on offer
In the US’s petri dish of democratic depravity,
Then maybe it’s time for the system to crumble
And to be replaced by nonviolent anarchy.

It’s sick to have billionaires or their puppets
Controlling the future of the species.
US democracy doesn’t count as democracy
But only as a notifiable disease.

[1] Fred Trump was once arrested at a KKK rally and was sued by the US Justice Department for refusing to rent flats to African-American people. http://www.marieclaire.co.uk/blogs/550112/donald-trump-quotes.html#kaeW4PlGC7lX54Fc.99

One Response to Donald Trump versus Hillary Clinton