Posted on 29 February, 2020 by Andrew Darlington 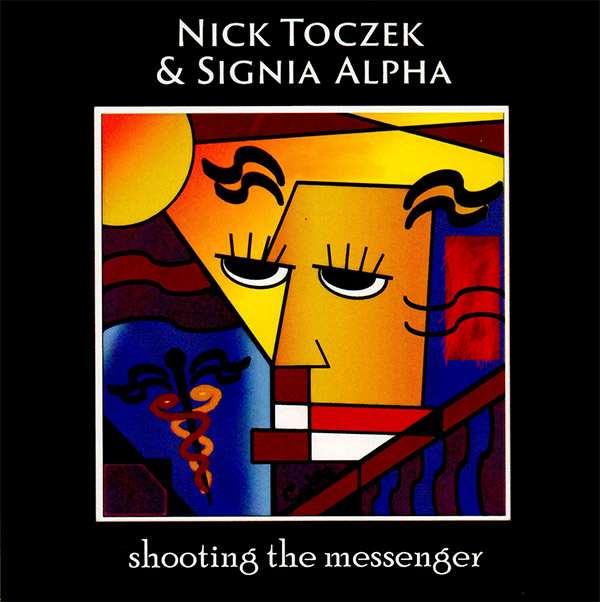 by NICK TOCZEK WITH SIGNIA ALPHA

The Beatniks used to mess with Jazzetry. John Giorno read his poems to a heavy boom-box dance backbeat. There’s Ranters DNA-vehemence in the line ‘it’s a lousy life and it stinks.’ Signia Alpha provide deep funk-bass when they’re granted space to spin out their own brew of ambient fusion. Keith Jafrate’s tight jazzy sax and clattering percussion in around the thoughts stampeding through Nick Toczek’s brain. Poems you can dance to, stream and download, the same universal dance – just different tunes. There’s a verse and chorus pacing to “The Voices In His Head”, a structure way out beyond Rap. Roland Kirk’s spirit breathes around “No Messages”, with rippling guitar, and even the lines rhyme within the polite English internalised riots where “This City Eats Itself” (done elsewhere with Thies Marsen’s more electro-mix). Rather, this is more making love in a combat zone, insisting on the remembrance of beauty and innocence in a time of death and guilt, it privileges life over death, hey girls hey boys, here we go, take a chance, I love this record baby, let’s dance. And no attempted millennial-busting either, Nick dares to side with the Bank Of Mom And Dad.

Nick’s targeted delivery has altered to advantage, from eager-beaver muso peacenik, watch the transformations, beginning to see what’s really going on ‘where truth tells lies and lies are true’, gaining confident projection, never sacrificing intimacy for drive or articulacy for momentum. Never mind expectations and explanations, in truth he’s a Lit-chameleon, another transformer. The credits are collective, with producer-multi-instrumentalist Matt Webster tweaking. The inner gatefold photo-spread shows Bradford studio shots, charting the psychology of rhythms from spacey trance into the complex mesh of interacting voices at the climax of faux testosterone-charged “When We Men Talk” – yet, even done live and solo, as he did at the ‘Jackanory’ reading, with no backing, these words stand.

There’s a change of pace to the spoken-word mystic narrative “The Painting”, a short story bridge into future-time, or the metaphoric nautical doomed voyage of “The Man Who Built The Titanic” – who built the Titanic? Wasn’t it Leonardo DiCaprio? Apparently not. It’s the sound of ice shearing on metal. Then the visionary time-spanning evolutionary world-history caught in the ignition-burst of “The Lighter” – a universe inside his head. I love this one. Thoughts spit off like sparks from an abrasive wheel. Immersed in unfiltered perception. The soft surrealism of “And A Theft”, and the old Care Home “Man On A Train”, where interacting memories weave in and out of the vast spread of temporal circularity, in ways both poignant, and very moving.

View all posts by Andrew →
This entry was posted on 29 February, 2020 in homepage and tagged Andrew Darlington. Bookmark the permalink.