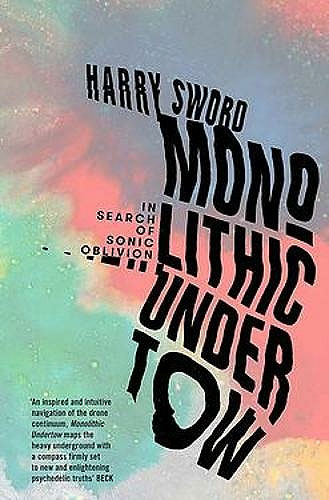 Harry Sword’s books is going on my list of greatest music books.* Monolithic Undertow is a fantastic wide-ranging and tangential exploration of drone that starts in the underground Hypogeum in Malta and ends up in dancefloor delirium, having visited The Velvet Underground, contemporary classical, ambient and krautrock en route.

Actually, if I could cheat I’d only put the first two-thirds of the book on my list, as I feel it loses its way, with Sword somehow cramming every type of music he likes into the drone category. Part of the problem is a lack of definition to begin with: Sword prefers to start his book in a ‘dazed half-hypnotised state’, the result of three days of doom metal and major dope indulgence. Whilst it’s amusing, it already suggests the author isn’t thinking straight and the doom/drone ambiguity and similar genre/sound blurrings is something that reoccurs throughout the book. Is the modal centre of improvised freakout jazz a drone, or just the root the music touches base with? Is repetitive techno or metal drone? How often is experiment and freeform (kraut)rock or (post)punk drone music? Or is it just to do with sustain, duration, echo and complexity, or the effect of music on a listener? Or is it because Harry Sword says so?

But let’s go back to the beginning. In the underground echo chamber of Malta’s Hypogeum (which I’ve been fortunate enough to visit) Sword explores some of the themes he will return to: a sense of spirituality or ritual, complex sustain, reverb, decay and echo, and music as catalyst for changing your state of mind. All good clear stuff, well-argued and exampled, as are other chapters on the music of La Monte Young and Tony Conrad and their links to The Velvet Underground, the Master Musicians of Joujouka, free jazz, and sideways/onwards into Ladbroke Grove and Hawkwind, Germany and several krautrock bands.

So far, all well and good. There’s a strong case for suggesting that Hawkwind’s electronic drones and experiment have been overlooked in favour of the amphetamine space-rock they are renowned for, and in a similar fashion Can, Faust, Ash Ra Tempel and others certainly underpin some of their work with drones. I’m a big fan of Sonic Youth and a lot of no wave music, too, and can see an argument for early Sonic Youth’s radical tunings and use of noise and drone marking them out for inclusion in this book. Rhys Chatham’s and Glenn Branca’s compositions also fit with a bit of belligerent shoehorning. Further down the line Eno and other ambient music often utilises drone, but it’s also around here that I start to worry about the direction of Guest’s book.

I can’t honestly see how Black Sabbath or Swans are drone, nor Iggy Pop and the Stooges, let alone the likes of Black Flag and Flipper. This isn’t about my musical taste, nor about genre – Earth (whose music I like) and Sunn 0]]] (which I don’t), for instance, both fit in to the drone category well, and Sword is coherent and informed about them. But minimal hardcore? Sludge metal? I’m unconvinced, as I am by the way Sword ignores the likes of Seefeel or Stars of the Lid, along with the plethora of ambient music that foregrounds drone, in favour of the sampled hip-hop hell of The Bug and the occult experiments of Coil. Eno’s long-form ambient music, probably most appropriate to the discussion, is ignored in favour of his work with Cluster, Music for Airports and the endlessly-retold story of Eno inventing ambient music post car-accident. Sword even suggests that grunge possessed a ‘sludgy, dronal, detuned tone’, something I’m sure that most adherents to the movement’s recycled 60s and 70s rock riffs would be surprised to hear.

Ultimately it’s the lack of definition of drone that lets the book down and allows Sword to wander aimlessly through the music he loves rather than follow through on the book’s majority of focussed and lively chapters. The closing chapter offers up a quick namecheck for contemporary artists such as Gazelle Twin and Richard Skelton (both of whom deserve longer sections), a brief visit to the hauntological worlds of Ghost Box and Mordant Music, and a bunch of vague claims for drone: ‘[it] allows you to take control of time’, ‘the ultimate folk music’, ‘fundamentally subversive’ and the closing ‘It exists outside of us, an aural expression of a universal hum we can only hope to fleetingly channel.’

I’m not sure about much of that, although a more formal exploration of how drone can disorientate our perceptions, including that of time, would have been interesting. I guess I’m more interested in the making of drones, how they are used and listened to, not the idea of ‘sonic oblivion’, which seem to be about something else entirely other than music.

View all posts by Rupert →
This entry was posted on 3 April, 2021 in homepage and tagged Harry Sword, Monolithic Undertow: In Search of Sonic Oblivion, Rupert Loydell. Bookmark the permalink.