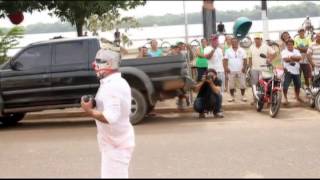 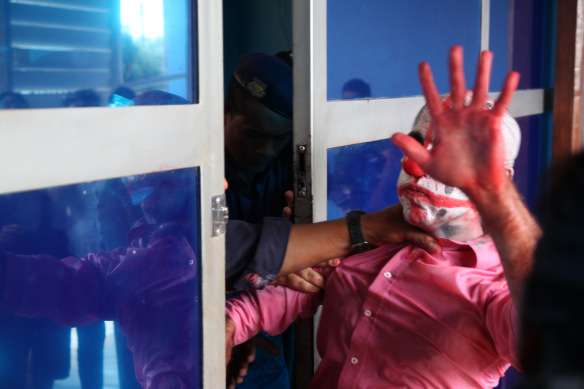 Using theatre he illustrated the death of the river and the suffering of the fisherman due to this enormous construction work of the Brazilian federal government, which already has an impact on people and traditions. He then made his way into the foyer of the building where a closed meeting was taking place.

The boat, the fishermen’s traditional means of transport, was forced inside the building where there were representatives of Norte Energia and the Brazilian Federal Government. The meeting was behind closed doors, which caused a confrontation at the front door.

Tiago Gambogi – Here in Altamira the focus of my research is Belo Monte. I am against Belo Monte, it’s impossible not to be against this. We need to stop this monstrosity NOW…! There is still time! It just needs all of you (points) watching this, do something all of you, for the love of God – can’t you see the stupidity of all of this. Environmental issues aren’t a joke! This is serious!

Reporter: The fishermen demand answers regarding the impact that they are already suffering with the building of the Belo Monte dam.

Only a small group of the fishermen’s leaders took part in the meeting with Norte Energia, IBAMA and the Ministry of Fisheries and the Public Defender and other organisations.

The remaining of the working fishermen were not allowed into the meeting and stayed in the foyer of the building and outside.

Jorge Luiz – fisherman – We had invitations, but they didn’t deliver what they promised because we are all here outside – waiting.

Reporter: Mrs Raimunda lives in the village of Belo Monte and said that the situation with the fish in that area is already difficult.

Mrs Raimunda – fisherwoman – It’s bad! …because for us to fish….there are almost no fish anymore. We are very close to real hardship… because if we have to count with the fish…there are not many…what can we do?

Reporter: Senhor Antônio shows his fishing licence, says that he knows first hand the sad consequences of building hydroelectric dams in Porto Velho’s rivers. He already knows that there will be direct impact to the rivers and to those whose survival depends on the river.

Senhor Antônio – Where I used to fish for a particular fish, I can’t catch anymore. This is not the first dam area that I’ve worked on. I lived and worked in an area near Porto Velho in Rondônia (a state south of Pará), on the river Jamari and there is a dam nearby. It was the dam. When I first arrived the fish were of one kind. After they built the dam…(and it’s a small river!) Five years after the dam was built there were lots of problems, the fisherman had big problems. In the area where we lived we couldn’t fish any more. They say this area won’t be affected. It’s a lie – it will be. It’s already affected.

Reporter: And you, as a fisherman, are you worried about your future and your family?

Senhor Antonio – It’s not just me – it’s lots of people and it’s not just the fisherman who will be affected.

Reporter: None of you have received answers, how you will receive a settlement… (ref to financial settlement from Belo Monte)

Senhor Antônio: I think this is difficult – to get a definite decision from this meeting.
Reporter: The Social Movement entered in the meeting to defend the various residents that live in the city in neighborhoods that will be directly affected by the dam. More than 30,000 families will have to be moved from their houses.

Antônia Melo – Xingu Vivo – We are here supporting the fight of the fishermen, for them to be recognized, for their right to be guaranteed a settlement and, also, demanding that IBAMA give us a meeting, a public audience, with the 14 neighborhoods, with all the inhabitants of the neighborhoods that are in a situation of risk and are impacted by this project.

These families have to leave their houses because of Belo Monte. We are here to talk with IBAMA because this public organisation has been hiding from the population, they haven’t been consulting with the population and they are listening to other people that don’t represent the affected population and we demand an urgent meeting with them for the more than 30,000 people of this city, people who are being damaged by this project called Belo Monte.

You work for Norte Energia? You are well?

What’s your work? Fisherman? Is it truth? Do you know all this people here?
So that’s ok dear friend!

I am a fisherman!

(Ties “No Entry” tape to posts)

And so! You’re really going to put up with all of this?

Health, yes, of course I want health. Therefore then I need as well the river, the forest, the animals.

I don’t need cheap energy, rotten, settlement (applause)
I don’t want to live by the rubbish dump, no! Seems this is the latest, isn’t it! (Norte Energia to build houses right next to rubbish dump)

Norte Energia thinks that people are rubbish, so they’re going to send everyone to live next to the rubbush dump! I can’t believe it!

Aaarrggghhh! Oh the progress of Brazil!!

Doesn’t have a heart, no!
(Applause)
(Runs after car)

(Stops car in road. Bursts blood over his head)

Do you want Belo Monte (Beautiful Mountain – name of the hydroelectric dam) or do you want a Bela Morte (Beautiful Death)???
Belo Monte or Beautiful Death??
Which do you prefer? An imported mobile phone? Three thousand reais at the end of the month? Huh? And your son? Huh? What is he going to do???

(To various cars: go on you all, move on…quick.)
(Car draws up – the public defender)

Hey public defender! What are you going to do for your people? Defend your people!
(Applause)

If anyone wants to say something – feel free!

I’m a fisherman! And I’m going to the meeting!
(Pulls boat up front steps)

I’m a fisherman and I want to go to the meeting now!!!

Aaargh! Help me with the boat!

I’m a fisherman, I moved to this region and I want to go to the meeting now.
Do not touch me.
Do not push me.
(Crowd chant “Let him in! Let him in!)

Let me free, don’t hold me, I’m not pushing you.

(Tussle with security at front doors)

Tiago enters the foyer, with all the supporters flooding through the doors!

Tiago Gambogi registered as a fisherman and tried to enter the meeting itself, but was prevented by the security. However, the meeting was disrupted and IBAMA, Ministry of Fisheries and other bodies entered into discussion with Xingu Vivo, the fishermen and others in the foyer.