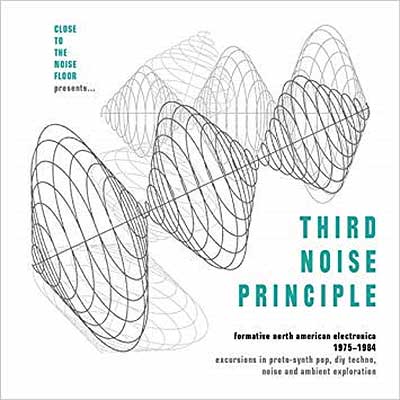 It’s the late 70s and 80s. Cheap synthesizers, electronic instruments and recording devices are coming down in price. Alongside the noise and clamour of punk and it’s more intelligent offspring post-punk a quieter revolution is taking place. What we now call ambient or background noise is being conjured up in countless bedrooms around the world, as is primitive dance music, and collages of noise, sound effects, beats, loops and stolen voices.

In England we had Cabaret Voltaire and Eyeless in Gaza. In North America there were the industrial religious exhortations of Blackhouse, the violin dementia of Nash the Slash, all dressed in bandages with nowhere to go, art-pranksters The Residents (who I confess bore me completely), Philip Glass’ shimmering minimalism (although I think he’s out of place here), Non’s beat-centred eardrum buzz, and Steve Roach’s alien and enticing guitar worlds. And that’s just some of the few I’ve heard of.

What’s great about this box is the stuff I haven’t heard of before, the wide-ranging mix of lo-fi crap that rubs shoulders with works of neglected genius. I’m sure some of the music is in here purely because of the names, but that’s okay: ‘Cat Vomit Punk House’ and ‘Dancing Hairpiece Wears Two Left Shoes’ don’t need to be any good, their titles are enough, a kind of conceptual art where the idea is all we need.

To be honest, we don’t need a lot of the stuff here. Controlled Bleeding are as unlistenable as they always have been, Ministry clearly weren’t on form the day they recorded ‘Work for Love (Dub)’, and Tuxedo Moon had yet to find their pretentious groove. But there’s always Suicide’s synth rockabilly to cheer you up (play ‘Rocket USA’ as loud as you can) and you’re bound to like some of the stuff I don’t, be it the sublimely slow and annoying Factrix or Sequencer People’s widdly diddly synthesizer and drum machine.

You gotta love the 1980s haven’t you? Just don’t make me go back there again. This box is full of surprises, both good and bad, although it clearly disproves Tone Set’s thesis/track that ‘The Devil Makes the Loudest Noise’. Actually a lot of this is pretty tinny stuff that would only bear fruit a few years down the line; this feels like research and development, experiments in sound. In the meantime, I might go and listen to some Deep Purple or Led Zeppelin, played loud: something to get the electronic cobwebs out of my head.