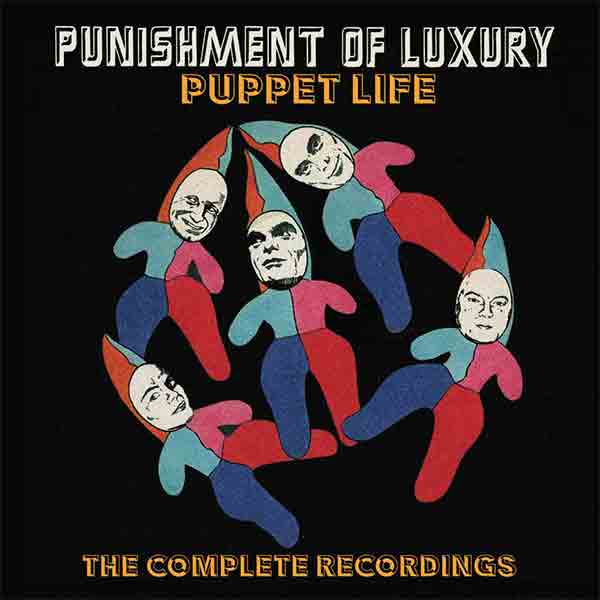 I really can’t remember if I ever saw Punishment of Luxury (aka Punilux) live or not. Either that, or an article or review in Sounds or NME, accompanied by photos of the band looking both strange and menacing in knitted ski-marks, prompted the purchase of their first single, ‘Puppet Life’, on Small Wonder, and – later on – their first album Laughing Academy, and a couple of further singles. But then, apart from a few internet sightings decades on, Punilux disappeared from (my) view.

This box set puts that right, featuring as it does various albums, mini-albums, cassette-albums, Peel sessions, bonus tracks, and an unreleased album, as well as a final disc featuring live recordings from three venues and the 1979 Reading Festival. And, of course, there’s a groovy little booklet too, with lots of photos and a rambling version of events by Nevilluxury. 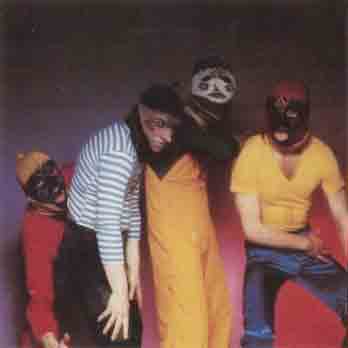 The visual side of the band was rooted in alternative theatre, the music a dynamic mix of postpunk and bludgeoning rock, although others claim to have spotted progrock in the mix. The original single version of ‘Puppet Life’ showcases these influences perfectly: there’s a manic babble of voices, repetitive whirling music and then a sledgehammer guitar and vocal that continues its insane charge, only pausing for some guitar pirouettes until the track shudders to a halt. Think Killing Joke or the Sensational Alex Harvey Band, think being shouted at in a very small, very dark room. It’s awesome music.

It’s also an approach that the band would repeat to good effect from then on in; the singles only ‘Engines of Excess’ and ‘Brain Bomb’ are also relentless hammering tunes with bludgeoning riffs, as is the former’s B-side, ‘Jellyfish’, a kind of demented children’s song about the creature of the song’s title. However, Laughing Academy the album was, for me, less successful. No-one I know can work out why ‘Puppet Life’ needed re-recording, nor why the album feels so single-mindedly similar throughout, only seriously changing tack for the more melodic title track. The overbearing satire of ‘All White Jack’ and ‘British Baboon’ mocked and destroyed themselves through the regurgitated quotation of somewhat iffy racist and xenophobic ideas, and even the slightly funkier ‘Funk Me’ is basically a sonic assault on the listener. There are subtleties on the album and it is an LP I have pulled out every so often over the last decades, but it is best taken in small doses.

Then, and now, I wanted it to be more fun. I liked the use of movement and props on stage (yes, I now reckon I saw them, possibly at The Nashville, which I used to frequent), those weird masks, and the fact they sounded different from most other bands at the time, but, but, but… something’s not right. The seriousness of topics continues throughout the music here ‘(Auschwitz’, ‘Damaging Man’, ‘Death and Boogie’, ‘Feels Like Dancing Wartime’ are just some of the track titles), with only the occasional track such as ‘My Wife’s in Love with a Polar Bear’ for light relief. Even the mini-album ‘Hi Alien’ is a pretty intense interpretation of the concept of an alien (mis)interpreting what it sees. 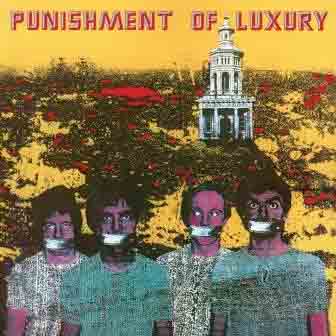 It’s weird, the band’s heaviness and the way they didn’t sit within the music scene at the end of the 1970s is both why I liked the band but also why I don’t. The live CD pretty much evidences that sense of relentless noise, never ending riffs, and hectoring rock. I can only compare it to the intense yet cathartic music of Doll By Doll (but without their pressure-releasing grand finale), or wish that they sometimes had a more lighthearted theatrical approach like Original Mirrors or Writz did at the time. But Punilux did what they wanted to do and started to do it again in 2007. This box is their just reward: a big detailed footnote allowing re-evaluation and relistening.

View all posts by Rupert →
This entry was posted on 21 September, 2019 in homepage and tagged Engines of Excess, Punishment of Luxury, Puppet Life –, Rupert Loydell, The Complete Recordings. Bookmark the permalink.