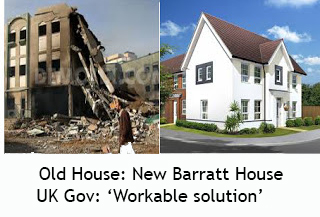 In controversial new plans put forward by the MOD and Barratt Homes, the entire Syrian population is to immigrate to Norwich where it will be housed in five million new relocation units built by the country’s largest housing supplier. According to home office officials this fresh approach in solving the recent immigrant crisis will allow UK bombing missions on the beleaguered state to continue and Barratt Homes to massively boost profits by charging the country’s taxpayers £250 billion to build the new houses.
.
Peter Plangite, Conservative minister overseeing the program, chuckled, ‘The UK has two main problems: One; we have a lot of bombs that we desperately need to drop on someone. Two; when we drop them people run away and come here. In the end it just seemed like common sense to get Barratt [Homes] and the MOD to bang their heads together and sort something out. Now we have come up with, what we think is, a workable solution.’
.
Barratt Homes were unavailable for comment but a spokesman for the MOD supported the plans saying, ‘Whilst war and its subsequent mass migration chaos might seem like a bad thing, UK citizens must remember, at all times, that they pay for both the bombs and the aftermath and my friends and I do not. On the contrary we make a tidy profit from them so it would simply be irrational to think that this, seemingly confusing, set of circumstances will not continue into the foreseeable future.’
Tweet

View all posts by Ethan →
This entry was posted on 10 September, 2015 in homepage and tagged current affairs, Ethan Harrison, politcal satire, Social Comment. Bookmark the permalink.