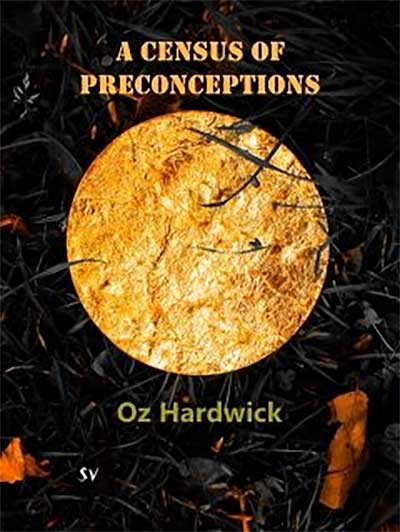 Oz Hardwick prose poems are short moments captured from what the author, in ‘Out of Town’, says is ‘Beyond the range of church bells’, where ‘time follows its own instincts’. These gently surreal poems slur time, jump time, and revel in experiential time, where action ceases or slows, allowing the poet time to breathe, take note, follow trains and trails of thought and share them with his readers.

In ‘The Coming of the Comet’, for instance, the original observation of the comet’s trails as ‘fragmented nursery rhymes’ (sky writing) allows the author to imagine reaching up to touch them, although he fears getting his fingers burnt, metaphorically and literally. Then the text undertakes a sideways move towards the ducks who have already flown away from the winter, which allows a digression about other creatures, before the poem swerves into myth and nursery rhymes, with a dying dragon returning us to the burning motif. All that in half a page!

Other poems in this collection are calmer and static. ‘Rain Fugue’ is just that, an ode to the past, lost love, triggered by association with bad weather; whilst ‘The Museum of Silence’ imagines the titular organization as a repository of items such as ’empty headlines, snapped violin strings’, ‘the pressure of gentle arms and the electricity of soft hair falling across eyelids’. The left-unsaid contradiction is the fact that the museum, where ‘There are never any words’, can only be conjured up through the author’s careful arrangement of words.

Elsewhere, there is a gentle humour with a serious undertow: ‘When we stopped wearing watches, our hands became lighter’ (‘The Evolutionary Urge’), ‘In the absence of clear government guidelines, I’ve convinced myself that angels are everywhere’ (‘Epihanies for All’), ‘I’ve changed the locks and changed my mind’ (‘imdb’), ‘Before he moved out, the previous owner hid a volcano in the house’ (‘The Armchair Volcanologist’). The poems are not the slightest bit incendiary though, although they do surprise and occasionally shock. ‘Swarm’, for instance, observes that ‘Bodies break up every day, but still we’re surprised when it happens to us’, before riffing on the idea of a search for ‘an appropriate image’. How to commemorate nothingness, or absence, the fleetingness of life in the grand scheme of things, even when there might be ‘sweetness at the heart of our shattering’?

These are poems where ‘Difficult questions push between simple gestures’ (‘Highway Blues’) and ‘Graveyards are the new shopping malls’ where visitors are ‘browsing their quiet aisles, comparing prices and window-shopping afterlives’. This set-up at the beginning of ‘Bargain’ allows Hardwick, or the poem’s narrator, a chance to remember, countering the fact that his ‘own family leave no trace’. He recalls a religious cult leafletting student groups, the notion of ‘a loving god whose face is too bright to see clearly’, and rescues his family from oblivion, before asking about ‘rest and redemption, about spreading payments, and about insurance in case of cancellation due to unforeseen circumstances’. The deity only offers him a brochure which contains only ‘a list of names printed in invisible ink’ inside it.

But this is not a dour or miserable book. Yes, it reflects upon death, beliefs, and doubts, but mostly it is full of joyous associations and playful observations, delightful moments and wonders from the world that readers can share. As Hardwick says in ‘Please Make Up My Room’, ‘Just because they are in your handwriting doesn’t mean they are necessarily your words’, and I guess the reverse is true: these words can become ours.

first published in Tears in the Fence

View all posts by Rupert →
This entry was posted on 21 January, 2023 in homepage and tagged A Census of Preconceptions, Oz Hardwick, Rupert Loydell. Bookmark the permalink.