Everything you’ve ever said and thought 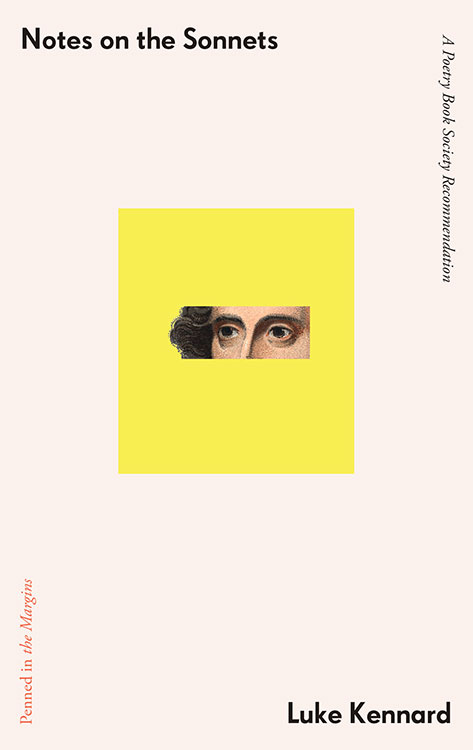 Luke Kennard is at heart a comedian. Find one of his poetry readings on youtube and you are in a world of stand-up surrealism, a world of weird connections, jumpcuts, streams-of-consciousness and smartarsery, all dredged from the inner workings of Kennard’s strange brain.

Notes on the Sonnets, one of two new Kennard books this year, is a prose poem collection with each of the 154 poems linking to a Shakespeare’s sonnet, set against the background of a party. (The other book is a novel, The Answer to Everything, published by HarperCollins.) I use the word conceit because the sonnets don’t obviously have much to do with the book, although there is a brief quote from Shakespeare before each of the prose poems begins. But the sonnets are in some weird/random order, and often the connection between the quote and text seems elusive, hypothetical and – to be honest – probably irrelevant to the general reader.

What you do get are riffs on themes, occasionally linked back to the idea of certain people and encounters with them at a party, or an event or situation occurring there, which allows the author to sidestep and make a conceptual run for somewhere else. Family life, doubt and faith, society, people, writers, social commentary, dark matter and string theory, the world at large, are all covered at some pace, each poem containing laugh-aloud ideas but also deep and considered moments which sneak up and surprise you.

I rather like this for instance, in a poem which starts with the narrator ‘mixing gin with lemon Fanta and talking about the problem with posterity’ (which does clearly link to the Shakespeare quote ‘Who will believe my verse in time to come’ at the top of the page):

‘Nobody ever puts away childish things because 1. There are so many of them and 2. There isn’t adequate storage space.’

‘Maybe we all carry a low-key torch for the hard-drinking writing tutor without a good word to say about anyone. Because when he compliments you he really means it, you know? But really. Better to put his head on a stick.’

I love the way one warms to the tutor and goes along with whoever is speaking in italics, before that warmth is undermined and the whole supposition collapsed by Kennard’s brutal and savage denouement and suggestion of what should be done to said grumpy tutor.

Kennard is excellent at pulling the rug from under the reader, and also misdirecting them: ‘Is that from Battlestar Galactica? No. They took it from Peter Pan, who took it from Stoicism.’ The connections are ridiculous and impossible, but this is part of a poem which travels from the past to the present, discussing history, understanding and the very nature of how we construct our ideas of self and society. And now I have probably put you off. The poem isn’t of course about that, it’s about the act of reading and slip-sliding from reference to counter-reference, from jokey aside to tangent to thought-provoking absurdity to a moment of calm as the final full stop occurs in the poem we are reading. And then it all starts all over again on the next page.

And I haven’t even mentioned the fact that between my first and second draft of this review it was announced that this book  has been nominated for the 2021 Forward Prize, nor  have I told you about the wise sad horse who inhabits parts of this extraordinary and original book.

Tweet
Tweet
This entry was posted on 12 June, 2021 in homepage and tagged Everything you've ever said and thought, Luke Kennard, Notes on the Sonnets, Rupert Loydell. Bookmark the permalink.