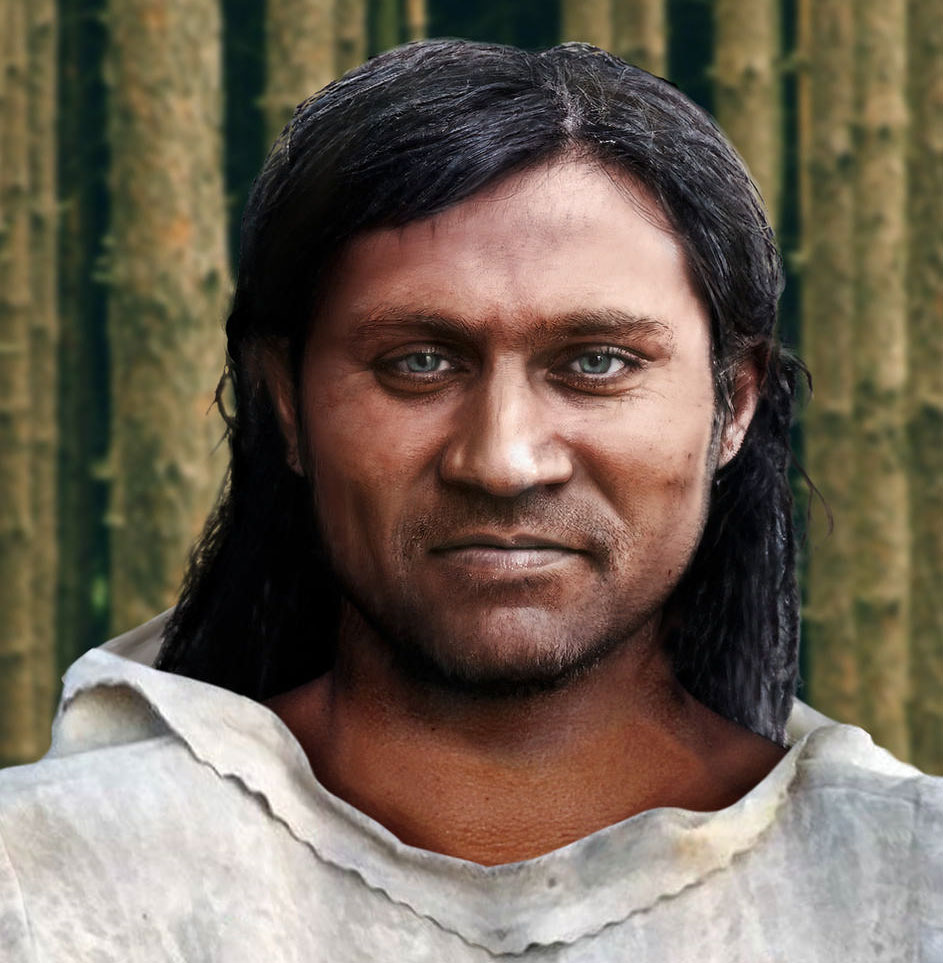 In 1903, at Gough’s Cave in Cheddar Gorge,
The skeleton of a man was discovered
During the course of improvements to drainage.
At the time, unsubstantiated claims were made
Concerning the age of the find:
From 40,000 to 80,000 years old.
In fact, the skeleton was from the Mesolithic period,
And was estimated, via radiocarbon dating
Available to scientists from the 1970’s onwards,
To be a mere 10,000 years old.
Nicknamed ‘Cheddar Man’, the bones comprise
The oldest, almost-complete skeleton of Homo Sapiens
Ever found in Britain.

After ancient DNA was extracted,
A portrait of ‘Cheddar Man’ began to emerge,
And it defied, quite fundamentally, all expectations.
Imagine the surprise when it was revealed
Our long-dead ancestor was black –
That is, dark-haired, dark-skinned, but blue-eyed.
The assumption that humans who’d moved into Europe,
Out of Africa, 45,000 years ago had quickly adapted
To have paler skin, in order to better absorb UV light,
And thereby avoid vitamin D deficiency,
Was, effectively, blown out of the evolutionary gene pool.
The fact that this discovery proved consistent
With other European Mesolithic human remains,
Strongly suggests, if not conclusively proves,
That black Britain emerged long before white Britain:
An unpalatable thought for all those
Of a certain ideological disposition,
And a salutary reminder, if such were required,
That actual facts, rather than assumed prejudice,
Can be a bit of a bugger if you happen to be
A member of any number of organisations
That proclaim a racially pure, pale-skinned heritage.

‘Keep Britain white’, scream the pseudo-warriors,
Afraid of the dark, but with placards held aloft,
As they gather to protest their inalienable rights:
To be as ugly as hate, and thick as a brick,
Keen, no doubt, to demonstrate the ‘Best of British’
To other members of their clan, and to the world at large.
These semi-evolved, intellectually-challenged Übermenschen,
Proud of their fantasy heritage, dismiss all talk of
‘Black Lives Matter’ – a movement which calls for
An equivalence of regard, not a form of supremacy –
Preferring instead the nitpicky, thoroughly disengenuous,
‘All lives matter’, as if, somehow, white lives
Don’t matter enough already, free – as they are –
From both blatant and micro aggression,
And utterly unlike the lives of those
More obviously descended from Cheddar Man.

Beneath the skin, we’re all black.
Best evolve a little,
Acknowledge this simple fact,
And grow up.

View all posts by Dafydd →
This entry was posted on 6 February, 2021 in homepage. Bookmark the permalink.